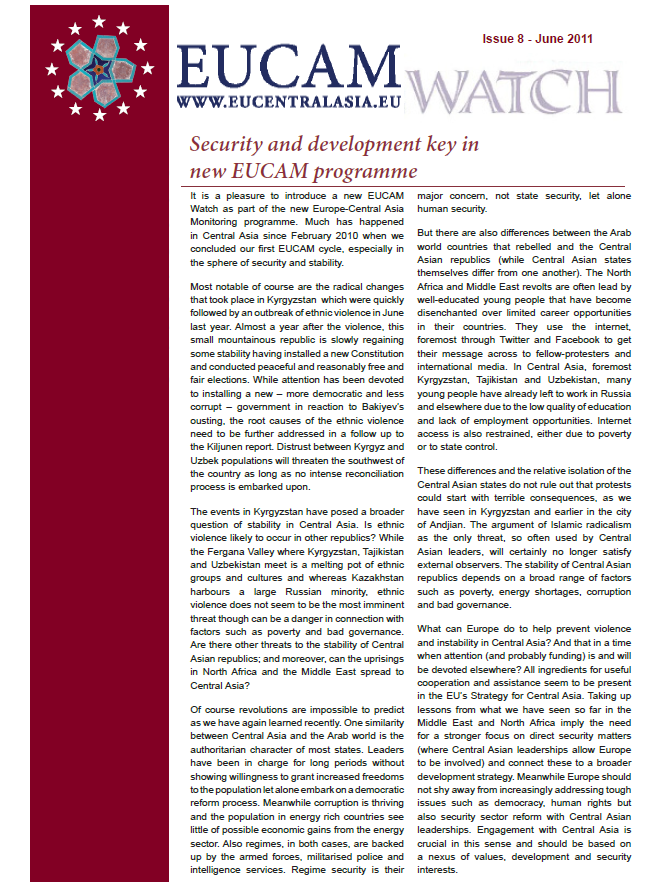 It is a pleasure to introduce a new EUCAM Watch as part of the new Europe-Central Asia Monitoring programme. Much has happened in Central Asia since February 2010 when we concluded our frst EUCAM cycle, especially in the sphere of security and stability.

Most notable of course are the radical changes that took place in Kyrgyzstan which were quickly followed by an outbreak of ethnic violence in June last year. Almost a year after the violence, this small mountainous republic is slowly regaining some stability having installed a new Constitution and conducted peaceful and reasonably free and fair elections. While attention has been devoted to installing a new – more democratic and less corrupt – government in reaction to Bakiyev’s ousting, the root causes of the ethnic violence need to be further addressed in a follow up to the Kiljunen report. Distrust between Kyrgyz and Uzbek populations will threaten the southwest of the country as long as no intense reconciliation process is embarked upon.

The events in Kyrgyzstan have posed a broader question of stability in Central Asia. Is ethnic violence likely to occur in other republics? While the Fergana Valley where Kyrgyzstan, Tajikistan and Uzbekistan meet is a melting pot of ethnic groups and cultures and whereas Kazakhstan harbours a large Russian minority, ethnic violence does not seem to be the most imminent threat though can be a danger in connection with factors such as poverty and bad governance. Are there other threats to the stability of Central Asian republics; and moreover, can the uprisings in North Africa and the Middle East spread to Central Asia?

Of course revolutions are impossible to predict as we have again learned recently. One similarity between Central Asia and the Arab world is the authoritarian character of most states. Leaders have been in charge for long periods without showing willingness to grant increased freedoms to the population let alone embark on a democratic reform process. Meanwhile corruption is thriving and the population in energy rich countries see little of possible economic gains from the energy sector. Also regimes, in both cases, are backed up by the armed forces, militarised police and intelligence services. Regime security is their major concern, not state security, let alone human security.

But there are also differences between the Arab world countries that rebelled and the Central Asian republics (while Central Asian states themselves differ from one another). The North Africa and Middle East revolts are often lead by well-educated young people that have become disenchanted over limited career opportunities in their countries. They use the internet, foremost through Twitter and Facebook to get their message across to fellow-protesters and international media. In Central Asia, foremost Kyrgyzstan, Tajikistan and Uzbekistan, many young people have already left to work in Russia and elsewhere due to the low quality of education and lack of employment opportunities. Internet access is also restrained, either due to poverty or to state control.

These differences and the relative isolation of the Central Asian states do not rule out that protests could start with terrible consequences, as we have seen in Kyrgyzstan and earlier in the city of Andjian. The argument of Islamic radicalism as the only threat, so often used by Central Asian leaders, will certainly no longer satisfy external observers. The stability of Central Asian republics depends on a broad range of factors such as poverty, energy shortages, corruption and bad governance.

What can Europe do to help prevent violence and instability in Central Asia? And that in a time when attention (and probably funding) is and will be devoted elsewhere? All ingredients for useful cooperation and assistance seem to be present in the EU’s Strategy for Central Asia. Taking up lessons from what we have seen so far in the Middle East and North Africa imply the need for a stronger focus on direct security matters (where Central Asian leaderships allow Europe to be involved) and connect these to a broader development strategy. Meanwhile Europe should not shy away from increasingly addressing tough issues such as democracy, human rights but also security sector reform with Central Asian leaderships. Engagement with Central Asia is crucial in this sense and should be based on a nexus of values, development and security interests.

EUCAM will closely follow these developments over the coming years and contribute through in-depth and critical research as well as through raising awareness and further expanding its network of experts and stakeholders across Europe and the region. Security and development will be central themes to our work.

This EUCAM Watch focuses on the EU’s policies through the Strategy that has its fourth anniversary coming up next month. Two interviews stand central: one with EU Special Representative for Central Asia Pierre Morel and the other with International Crisis Group Vice-president (Europe) Alain Délétroz. Next to this we present our latest publication and notifcations of Europe-Central Asia news and external publications. Lastly our new Advocacy Offcer Tika Tsertsvadze introduces herself; an exercise we plan to continue in future newsletters so to bring the work of our new EUCAM experts and partners to your attention.