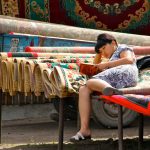 In 2016, the European Union (EU) granted Kyrgyzstan Generalised Scheme of Preferences Plus (GSP+) status. The new status meant reduced or zero tariffs for Kyrgyz exports to European markets on certain commodities, in exchange for Kyrgyzstan implementing several conventions of the United Nations (UN) on human rights and the International Labour Organisation (ILO). While this was intended to open up new opportunities for economic relations between the two partners and help Kyrgyzstan to increase and diversify its exports and strengthen its economy, so far the scheme has not yielded substantial results for Kyrgyz exporters. According to an EU Report on the Generalised Scheme of Preferences during the period 2016 – 2017, in 2016, only around 4 per cent of total Kyrgyz exports to the EU were supplied under the GSP+ status, representing savings of €122,000, hardly contributing to boosting exports or to the GSP+ stated objective of ‘poverty eradication by expanding exports from countries most in need’. In sum, this is no game changer, even for a small economy like Kyrgyzstan.

While the Kyrgyz business community has welcomed GSP+, it has been sceptical from the start about its potential benefits in terms of trade. First, Kyrgyz exports to the EU are not significant, representing only 5.4 per cent of total Kyrgyz exports. In 2017, it amounted to €151 million only, according to the EU’s Directorate General for Trade. Second, only a few EU countries import from Kyrgyzstan. In 2017, the United Kingdom accounted for 77.5 per cent of Kyrgyz exports to the EU. Plus, exports mainly consisted of gold, which does not fall within GSP+ (calculation made by the author based on data from www.trademap.org). Third, Kyrgyz exports to the EU included in GSP+ are mostly agri-food products, which have little added value and are thus less interesting to export. So far, Kyrgyzstan is the country that has least benefitted among the 10 countries worldwide included in the GSP+ scheme, accounting for 0.04 per cent of the total exports of this group.

In order to boost the impact of GSP+, the EU should keep several things in mind:

First, standardisation is not a panacea. While many believe that the main obstacle for Kyrgyz producers to export to the EU is that products do not meet EU quality standards, they are only partially right. For instance, Russia financed the establishment in 2017 of a veterinary and phytosanitary laboratory in Osh, Southern Kyrgyzstan, which is not operational because there is no local demand; all export flows are consolidated, refined, packed and shipped from the capital Bishkek to various destinations. The country’s provinces are considered to be raw material suppliers and are barely involved in preparing products for export. Assistance in standardisation will bring little as long as the main export products have low added value (agricultural and natural resources). Helping Kyrgyzstan to increase the capitalisation of local production by producing higher value added products (condiments and sauces, garlic oil and powder, apricot and sea buckthorn oil, apparel and clothing made of felt, silk and cotton, silver jewellery) is more costly but will have a much greater impact.

Second, connecting producers and consumers through trade intermediaries could reinforce export patterns and help pave the way for Kyrgyz exports to the EU. So far, two groups of Kyrgyz exporters have successfully reached European markets: joint Kyrgyz-European enterprises and Kyrgyz exporters that had received technical and financial assistance from international donors. The former are likely to be more sustainable as they are market-based and less dependent on external funding. The EU could contribute to establish more of these joint enterprises or intermediary companies (or brokers) that could provide expertise and help Kyrgyz producers identify and manage exports, access the European market and distribution networks, or even improve the credibility of Kyrgyz companies and diminish the risk of market discrimination. This model has worked well with Turkey, whereby Turkish businesses helped Kyrgyz kidney bean farmers to pack, label and deliver their beans to Turkey and the Balkans.

Ideally, Kyrgyz small and medium-sized businesses (SMEs) and Business Intermediary Organisations (BIOs) that bring together companies from a specific sector would have the opportunity to link with EU member state programmes such as the Dutch Centre for the Promotion of Imports from developing countries (CBI) that is part of the Netherlands Ministry of Foreign Affairs. The CBI identifies opportunities in the European market and translates them into practical actions for exporters. By supporting SMEs in developing countries to enter the European market, the CBI promotes these countries’ integration into global value chains.

Third, in order to help build a more professional and positive business environment, the EU should expand its focus on networking. Kyrgyz exporters have a clear understanding of their export capacity to Kazakhstan, Russia, Tajikistan and Uzbekistan, countries that account for approximately 46.7 per cent of Kyrgyz exports (calculations made by the author based on information from www.trademap.org). With respect to the EU, the geographical distance, differences in GDP per capita, customer behaviour and consumer culture, as well as a lack of historical, geographical and linguistic connectivity, have resulted in poor knowledge, erroneous assumptions about the European market and hence a bewildering trade gap. Networking through business platforms and B2B fora could help give more visibility to Kyrgyz products and services and facilitate the exchange of information on market and business culture and of insights on business opportunities. The EU could also organise study tours such as those organised by the American Chamber of Commerce in Kyrgyzstan.

Fourth, vocational education is crucial to boosting Kyrgyz exports in the long run, not only to Europe but also to other international markets. European support would be particularly valuable in terms of on-the-job training and could include internships/apprenticeships in Europe to help Kyrgyz students understand European business culture. Germany has a very interesting model of dual vocational education and training (Dual VET) to build a qualified labour force. The Dual VET is a three-year programme composed of 50 per cent in-classroom instruction and 50 per cent on-the-job training at participating companies under the supervision of skilled mentors. Germany has bilateral cooperation deals with a variety of countries to introduce the model, and ideally, this opportunity would be offered to Kyrgyzstan as well.

Meanwhile, Kyrgyzstan itself could also do more to boost trade under GSP+, for example by expanding the role of its embassies and diplomatic representations in Europe. Kyrgyz embassies are primarily focussed on diplomatic representation and not so much on business promotion. Kyrgyzstan could learn from European embassies based in the country that has a strong focus on trade promotion. Kyrgyz embassies in Europe and elsewhere could also do more in terms of channelling business information, business partner screening, market analytics and network development. A good example would be the Netherlands Enterprise Agency that seeks to unlock export promotion possibilities through Dutch Embassies all over the world.

In sum, in order to make GSP+ worthwhile from a trade perspective, both Kyrgyzstan and the EU need to invest in higher added value commodity production; support trade intermediaries; develop networks, and promote vocational education.