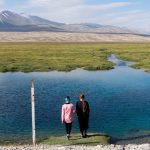 ‘The real voyage of discovery consists not in seeking new landscapes, but in having new eyes’, Marcel Proust

Tajikistan has the potential to become the next popular destination on the bucket list of foreign travellers. Its mountains and hot springs, lakes and rivers, and national parks and historical monuments provide a wide range of options, from adventure to recreational to community-based or historic-cultural tourism.

As one of the fastest-growing economic sectors worldwide, tourism, with its spill-over effects on trade, transportation, and services, is a potential catalyst of socio-economic development. The development of the tourism industry in Tajikistan could help the country to diversify the economy, decreasing its long-standing dependency on the aluminium and cotton industries and remittances from labour migrants in Russia. However, tourism development is a double-edged sword. The mass influx of tourists in some countries has also shown the potentially destructive role of the sector. Thus, while neither under- nor over-tourism would provide a viable solution for Tajikistan, responsible, ‘smart tourism’ would offer an opportunity for economic diversification, while also redistributing the benefits among local communities, stimulating SME development, and protecting natural sites and cultural identity.

Over the past few years, the Tajik government has taken some steps to develop the tourism sector. In 2016, the introduction of the first e-visa application system in the region allowed nationals of over 100 countries to apply for entry visas online. Tajikistan is a member of the United Nations World Tourism Organisation (UNWTO), and has participated in international tourism fairs in Berlin, London, and Tokyo. Furthermore, the President of Tajikistan declared 2018 as a ‘Year of Tourism and Folk Crafts’. Finally, in August 2018 a new National Strategy of Tourism Development was adopted to ‘guarantee [a] sustainable development of tourism’. Nonetheless, Tajikistan ranked 107th of 136 states in the 2017 Travel & Tourism Competitiveness Index, which assesses countries’ business environment, safety, infrastructure, and environmental sustainability.

Tajikistan has a lot to offer potential tourists, but first, it needs to deal with a few challenges. First, the horrible attack on foreign cyclists in summer 2018 has cast a shadow on the country’s tourism potential, and Tajikistan’s weak rule of law, bad governance and nationwide corruption further hamper the prospects for attracting tourists beyond some adventurers. Second, the quality, prices and conditions of accommodation remain poor, while the infrastructure (from roads to digital connectivity) is also problematic. Third, there is a lack of qualified and adequately trained professionals such as tour guides, instructors or managers. Fourth, despite its unique culture and history, the country’s visibility in the international market is limited due to a lack of a clear branding strategy. And finally, visas for Tajikistan and permits for Gorno-Badakhshan (GBAO) remain burdensome.

Considering the European Union’s (EU) substantial engagement in Tajikistan and the growing number of European tourists interested in the country, the EU could support sustainable tourism programmes. The EU has recently committed €3.4 million to a UNESCO project on the promotion of Silk Roads’ Cultural Heritage Corridors, focused on issues such as safeguarding cultural heritage and promoting sustainable local economic development through tourism. The EU could opt for integrating sustainable tourism-related components into existing development cooperation programmes. Here are some examples:

First, the EU could increasingly include tourism in the existing Tajikistan-focused educational and rural development priorities of its development aid. In terms of education, the EU could facilitate workshops, vocational training, and language exchange and higher education programmes focused on hospitality and green growth to better prepare managers, tour guides, interpreters, marketers, event organisers, and tour operators. Returned labour migrants and women who have been left behind by their migrant husbands could be potential target groups. Considering that approximately 70 per cent of the Tajik population lives in rural areas, rural development remains crucial for the economy. Moreover, Tajikistan’s rural areas are much more likely to be appealing to tourists than cities, and the EU could finance projects to develop local agriculture, trade and communities.

Second, the EU should continue and expand its commitment to capacity-building programmes to develop Tajikistan’s business environment and private sector by supporting Business Intermediary Organisations’ (BIOs) projects on handicrafts and community-based tourism under the regional Central Asia Invest mechanism. The EU, together with other donors, could expand its work with the private sector to create a favourable business climate for both local and foreign investors. Furthermore, initiatives such as the ‘Enterprise Europe Network: tourism and cultural heritage’ could help to build links between tourism sector practitioners from Europe and Tajikistan.

Third, the EU could consider replicating its SWITCH-Asia programme that successfully implemented sustainable tourism projects to reduce the carbon footprint of the tourism sector in Thailand, Sri-Lanka, Philippines and Bhutan. Specifically, activities such as capacity building, awareness raising, carbon labelling, or the promotion of low carbon products and services carried out in Bhutan could be replicated in the Tajik context, ultimately helping to leapfrog the pitfalls of tourism growth in the long run.

Last, as a pioneer of the single visa within the Schengen Area, the EU could share valuable expertise with the Central Asian countries on the free movement of tourists. Kazakhstan and Uzbekistan have announced their plans to introduce a Silk Visa in the short run (this could be introduced as early as February 2019), with a view to boosting tourist visits to both countries by facilitating one single visa. While Tajikistan has shown interest in joining at a later date, at the moment there seems to be no concrete plans or timeline. If a Silk Visa does become a reality, also with Kyrgyzstan and Tajikistan, the EU could assist with its implementation, for instance through its BOMCA border management programme for Central Asia.

While tourism development is becoming a priority for the Tajik government, it is important not to be tempted by mass tourism’s short-term gains but focus instead on attracting sustainable or smart tourism that would also help to develop local economies. In the words of Marcel Proust, a new tourist should not only be seeking new landscapes but be open to looking with new eyes to Tajikistan’s landscapes, peoples and culture. Hopefully, the EU will be a partner in this adventure.

Seven pointers for the new EUSR for Central Asia