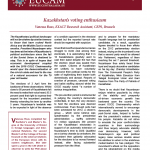 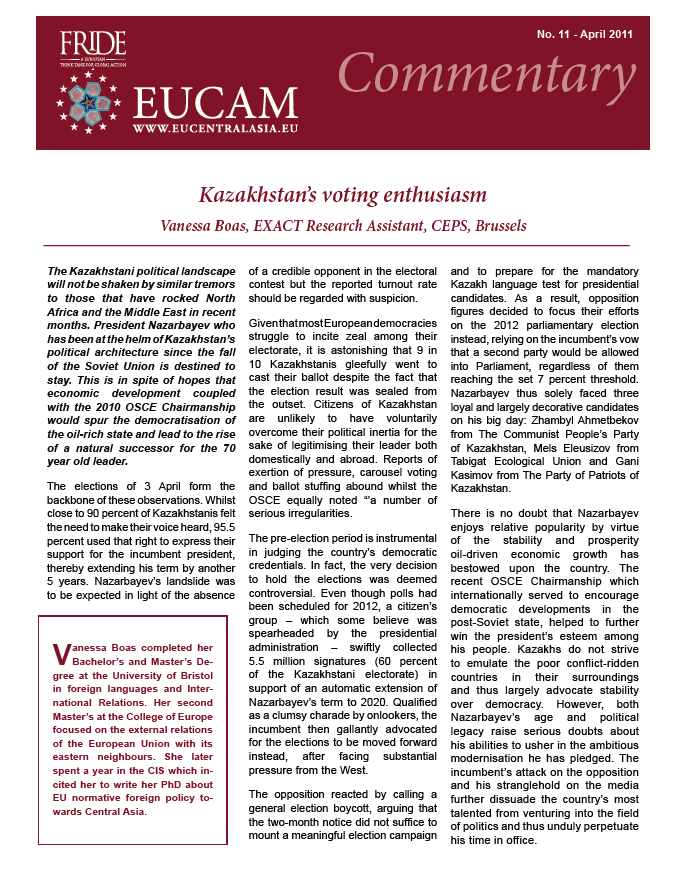 The Kazakhstani political landscape will not be shaken by similar tremors to those that have rocked North Africa and the Middle East in recent months. President Nazarbayev who has been at the helm of Kazakhstan’s political architecture since the fall of the Soviet Union is destined to stay. This is in spite of hopes that economic development coupled with the 2010 OSCE Chairmanship would spur the democratisation of the oil-rich state and lead to the rise of a natural successor for the 70 year old leader.

The elections of 3 April form the backbone of these observations. Whilst close to 90 percent of Kazakhstanis felt the need to make their voice heard, 95.5 percent used that right to express their support for the incumbent president, thereby extending his term by another 5 years. Nazarbayev’s landslide was to be expected in light of the absence of a credible opponent in the electoral contest but the reported turnout rate should be regarded with suspicion.

Given that most European democracies struggle to incite zeal among their electorate, it is astonishing that 9 in 10 Kazakhstanis gleefully went to cast their ballot despite the fact that the election result was sealed from the outset. Citizens of Kazakhstan are unlikely to have voluntarily overcome their political inertia for the sake of legitimising their leader both domestically and abroad. Reports of exertion of pressure, carousel voting and ballot stuffing abound whilst the OSCE equally noted “’a number of serious irregularities.

The pre-election period is instrumental in judging the country’s democratic credentials. In fact, the very decision to hold the elections was deemed controversial. Even though polls had been scheduled for 2012, a citizen’s group – which some believe was spearheaded by the presidential administration – swiftly collected 5.5 million signatures (60 percent of the Kazakhstani electorate) in support of an automatic extension of Nazarbayev’s term to 2020. Qualified as a clumsy charade by onlookers, the incumbent then gallantly advocated for the elections to be moved forward instead, after facing substantial pressure from the West.

The opposition reacted by calling a general election boycott, arguing that the two-month notice did not suffice to mount a meaningful election campaign and to prepare for the mandatory Kazakh language test for presidential candidates. As a result, opposition figures decided to focus their efforts on the 2012 parliamentary election instead, relying on the incumbent’s vow that a second party would be allowed into Parliament, regardless of them reaching the set 7 percent threshold. Nazarbayev thus solely faced three loyal and largely decorative candidates on his big day: Zhambyl Ahmetbekov from The Communist People’s Party of Kazakhstan, Mels Eleusizov from Tabigat Ecological Union and Gani Kasimov from The Party of Patriots of Kazakhstan.

There is no doubt that Nazarbayev enjoys relative popularity by virtue of the stability and prosperity oil-driven economic growth has bestowed upon the country. The recent OSCE Chairmanship which internationally served to encourage democratic developments in the post-Soviet state, helped to further win the president’s esteem among his people. Kazakhs do not strive to emulate the poor conflict-ridden countries in their surroundings and thus largely advocate stability over democracy. However, both Nazarbayev’s age and political legacy raise serious doubts about his abilities to usher in the ambitious modernisation he has pledged. The incumbent’s attack on the opposition and his stranglehold on the media further dissuade the country’s most talented from venturing into the field of politics and thus unduly perpetuate his time in office.

Unfortunately, developments in the last decades in Central Asia illustrate that leaders neither silently nor voluntarily step down from their thrones and that constructive criticism in the form of opposition remains a threat to be stamped out rather than embraced as a healthy force for development and change. However, the stability which has characterized Nazarbayev’s reign may soon become precarious if a succession mechanism is not put in place. Postelection reappointments, currently underway in the corridors of power in Astana, may offer further insights into the President’s favourites for a post- Nazarbayev Kazakhstan. Meanwhile, reactions from the international community have been ambivalent. Whilst the OSCE expressed concern and disappointment, underlining that ’reforms necessary for holding genuine democratic elections have yet to materialize’, neither the EU nor the US articulated strong criticism. The EU High Representative for Foreign Affairs and Security Policy Catherine Ashton was quick to congratulate the Kazakhstani people for making their voice heard while plans about negotiations for an advanced partnership agreement that might result in a quantum leap in EU-Kazakh relations surfaced in the media.

The intricate debate between values and interests in EU foreign policy is bound to continue. However one lesson can be learnt from the April elections: Nazarbayev is genuinely concerned with his image in the West and at least intends to feign democracy. Whether it be part of an attempt to prop up his multi-vector foreign policy or to lure investors, the West consequently has a chip at its disposal. Critique should thus be spelt out in bold capital letters and not written in flowery small print. This will help dispel perceptions of the EU as an indiscriminate energy gobbler and in turn strengthen its image as a coherent actor.

Kazakhstan, by virtue of its soviet legacy and geographic location is surrounded by two major global powers whose policies are both more consistent and straightforward than those of the European Union. Brussels, as a distant newcomer in the region, can neither impose its visions of democracy nor side-line the actors in Kazakhstan’s neighbourhood. The EU is however unique in its position as an ideational power which its high living standards and rich cultural heritage confer it. Moreover, increased contact through educational exchange programmes such as Erasmus Mundus and the Kazakhstani Bolasakh scholarship scheme as well as intensified government interaction through dialogue sessions in the framework of the EU-Central Asia Strategy are likely to result in a certain degree of socialisation. Even if changes are not felt overnight, this approach remains the most viable given the EU’s limited role and capacities in Central Asia.