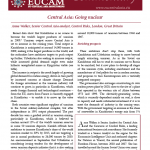 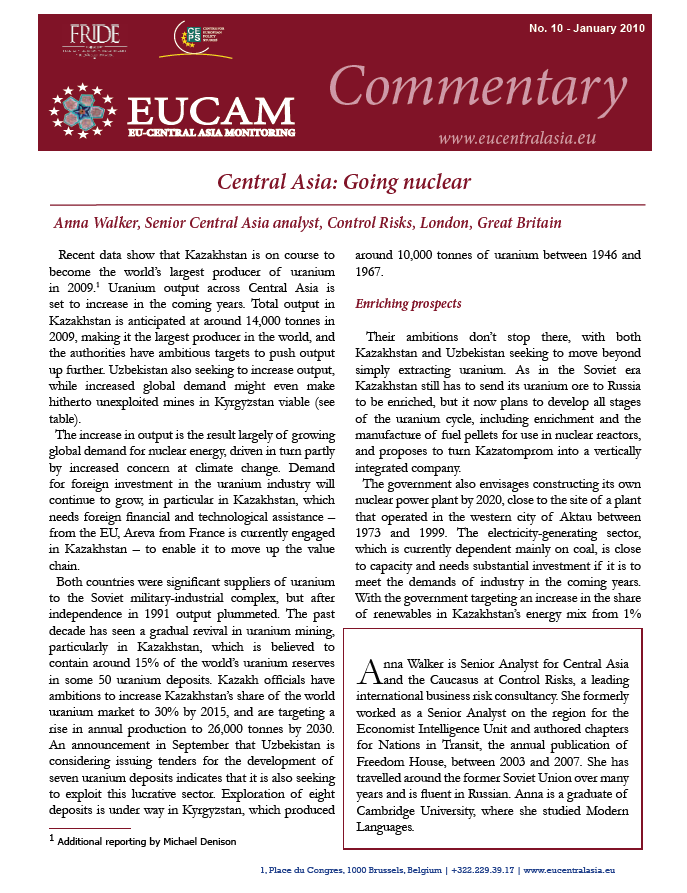 Recent data show that Kazakhstan is on course to become the world’s largest producer of uranium in 2009.(1) Uranium output across Central Asia is set to increase in the coming years. Total output in Kazakhstan is anticipated at around 14,000 tonnes in 2009, making it the largest producer in the world, and the authorities have ambitious targets to push output up further. Uzbekistan also seeking to increase output, while increased global demand might even make hitherto unexploited mines in Kyrgyzstan viable (see table).

The increase in output is the result largely of growing global demand for nuclear energy, driven in turn partly by increased concern at climate change. Demand for foreign investment in the uranium industry will continue to grow, in particular in Kazakhstan, which needs foreign financial and technological assistance – from the EU, Areva from France is currently engaged in Kazakhstan – to enable it to move up the value chain.

Both countries were significant suppliers of uranium to the Soviet military-industrial complex, but after independence in 1991 output plummeted. The past decade has seen a gradual revival in uranium mining, particularly in Kazakhstan, which is believed to contain around 15% of the world’s uranium reserves in some 50 uranium deposits. Kazakh officials have ambitions to increase Kazakhstan’s share of the world uranium market to 30% by 2015, and are targeting a rise in annual production to 26,000 tonnes by 2030. An announcement in September that Uzbekistan is considering issuing tenders for the development of seven uranium deposits indicates that it is also seeking to exploit this lucrative sector. Exploration of eight deposits is under way in Kyrgyzstan, which produced around 10,000 tonnes of uranium between 1946 and 1967.

Their ambitions don’t stop there, with both Kazakhstan and Uzbekistan seeking to move beyond simply extracting uranium. As in the Soviet era Kazakhstan still has to send its uranium ore to Russia to be enriched, but it now plans to develop all stages of the uranium cycle, including enrichment and the manufacture of fuel pellets for use in nuclear reactors, and proposes to turn Kazatomprom into a vertically integrated company.

The government also envisages constructing its own nuclear power plant by 2020, close to the site of a plant that operated in the western city of Aktau between 1973 and 1999. The electricity-generating sector, which is currently dependent mainly on coal, is close to capacity and needs substantial investment if it is to meet the demands of industry in the coming years. With the government targeting an increase in the share of renewables in Kazakhstan’s energy mix from 1% to 5% by 2024, development of both hydropower and nuclear energy is a government priority.

Global nuclear players are already well-established in Kazakhstan (see box for selected projects), with France’s Areva, Canadian company Cameco and Japan’s Sumitomo involved in uranium extraction. Canada’s Uranium One is also a major player in Kazakhstan – the location of the company’s only productive assets. State-owned companies from China and India have recently secured large deals in Kazakhstan, which will see Kazatomprom working together with these countries to develop their civilian nuclear programmes, while providing the necessary uranium to power new plants.

Uzbekistan, too, is opening up to foreign investment. In August the State Geology Committee signed a resolution creating a joint venture, Uz-China Uran, with China’s Guangdong Nuclear Power Company to explore uranium deposits and to develop uranium enrichment technology in Uzbekistan, with the Chinese partner to provide the financial and technical resources. The Uzbek authorities also declared in September that they intended to hold auctions for the development of seven uranium deposits, most likely in the first quarter of 2010. The state company Navoi Mining and Metallurgy Combinat is the local enterprise responsible for the uranium sector; all Uzbekistan’s uranium is exported.

Given the environmental and geopolitical sensitivities surrounding the nuclear industry, development of the sector is not without controversy, particularly in Kazakhstan. The Semipalatinsk region in the north-east of the country was used for weapons testing in the Soviet era, leading to contamination of around 300,000 sq km of land. Kazakhstan earned plaudits for its decision on independence to give up its arsenal of nuclear weaponry. It has since tried to turn the thorny issue of weapons proliferation to its diplomatic advantage, offering to host a global nuclear fuel bank.

A role for the EU?

The EU has prioritised the building of a structured energy relationship with the Central Asian states in its regional strategy. Hitherto attention has been almost solely focused on the oil and gas sectors, but uranium and civil nuclear power more generally represents an under-reported but potentially significant arena for interaction. EU commercial players – Areva apart – have not been particularly active as investors, but there is increasing indication that European international oil companies (IOCs) are prepared to move into the nuclear sector, along with specialist industry partners, where there is a clear commercial opportunity. Given the expansion plans in the region, the EU has an opportunity to develop its footprint. Commercially the opportunities are self-evident, and the relatively under-developed technological position of the Central Asian republics indicates that companies are less likely to be subject to contract renegotiation or political interference.

Moreover, given that security is at the heart of the EU-Central Asia strategy, the EU can play an important role in the area of nuclear safety. There are concerns within the industry that insufficient safeguards are in place to prevent terrorists from obtaining uranium to manufacture a so-called dirty bomb; in January 2008 the head of the International Atomic Energy Agency, Mohamed ElBaradei, stated in a newspaper interview that many of some 100 incidents in which nuclear material was trafficked had involved Romania, Ukraine, Kazakhstan and Uzbekistan. Such concerns provide the backdrop to objections to Kazatomprom buying a 10% stake in the US company Westinghouse from Japan’s Toshiba in 2007. Critics argued that this would give Kazakhstan potentially compromising access to sophisticated nuclear technology that could then be exploited for criminal purposes. The EU might enunciate a more formal and developed position on the nuclear security issue by directing resources in its regional and bilateral budgets to safeguard nuclear facilities.