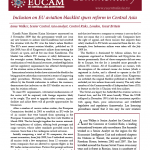 Home Research & Publications Commentaries On How the Inclusion on EU Aviation List Spurs Reform in Central...
EUCAM Commentary - No. 9 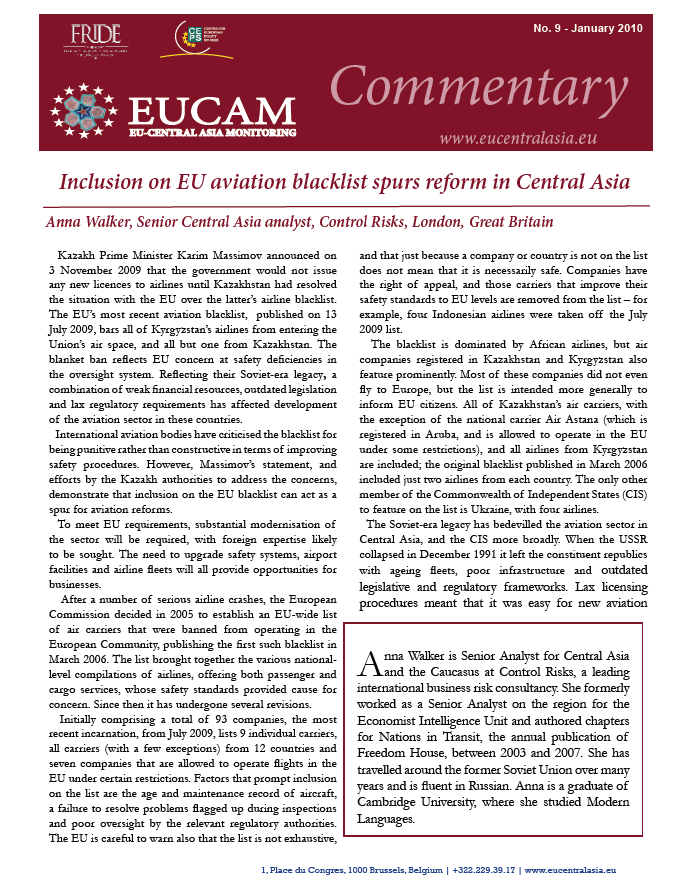 Kazakh Prime Minister Karim Massimov announced on 3 November 2009 that the government would not issue any new licences to airlines until Kazakhstan had resolved the situation with the EU over the latter’s airline blacklist. The EU’s most recent aviation blacklist, published on 13 July 2009, bars all of Kyrgyzstan’s airlines from entering the Union’s air space, and all but one from Kazakhstan. The blanket ban reflects EU concern at safety deficiencies in the oversight system. Reflecting their Soviet-era legacy, a combination of weak financial resources, outdated legislation and lax regulatory requirements has affected development of the aviation sector in these countries.

International aviation bodies have criticised the blacklist for being punitive rather than constructive in terms of improving safety procedures. However, Massimov’s statement, and efforts by the Kazakh authorities to address the concerns, demonstrate that inclusion on the EU blacklist can act as a spur for aviation reforms.

To meet EU requirements, substantial modernisation of the sector will be required, with foreign expertise likely to be sought. The need to upgrade safety systems, airport facilities and airline fleets will all provide opportunities for businesses.

After a number of serious airline crashes, the European Commission decided in 2005 to establish an EU-wide list of air carriers that were banned from operating in the European Community, publishing the first such blacklist in March 2006. The list brought together the various nationallevel compilations of airlines, offering both passenger and cargo services, whose safety standards provided cause for concern. Since then it has undergone several revisions.

Initially comprising a total of 93 companies, the most recent incarnation, from July 2009, lists 9 individual carriers, all carriers (with a few exceptions) from 12 countries and seven companies that are allowed to operate flights in the EU under certain restrictions. Factors that prompt inclusion on the list are the age and maintenance record of aircraft, a failure to resolve problems flagged up during inspections and poor oversight by the relevant regulatory authorities. The EU is careful to warn also that the list is not exhaustive, and that just because a company or country is not on the list does not mean that it is necessarily safe. Companies have the right of appeal, and those carriers that improve their safety standards to EU levels are removed from the list – for example, four Indonesian airlines were taken off the July 2009 list.

The blacklist is dominated by African airlines, but air companies registered in Kazakhstan and Kyrgyzstan also feature prominently. Most of these companies did not even fly to Europe, but the list is intended more generally to inform EU citizens. All of Kazakhstan’s air carriers, with the exception of the national carrier Air Astana (which is registered in Aruba, and is allowed to operate in the EU under some restrictions), and all airlines from Kyrgyzstan are included; the original blacklist published in March 2006 included just two airlines from each country. The only other member of the Commonwealth of Independent States (CIS) to feature on the list is Ukraine, with four airlines.

The Soviet-era legacy has bedevilled the aviation sector in Central Asia, and the CIS more broadly. When the USSR collapsed in December 1991 it left the constituent republics with ageing fleets, poor infrastructure and outdated legislative and regulatory frameworks. Lax licensing procedures meant that it was easy for new aviation companies to start up, often with just one or two poorly maintained aircraft. At the same time, a lack of financial resources – and more pressing demands on public finances – meant that governments have not always been able to devote funds to improving their oversight of the sector. This has meant that there is no money to purchase equipment such as new cockpit simulators for pilots trained on Sovietera Tupolev or Antonov planes, but now operating US or European aircraft. Finally, training of inspectors has suffered, and low salaries have in the past meant that inspectors “moonlighted” as safety consultants to the very airlines that they were scrutinising.

The EU has not won global support for the blacklist. Among its critics is the International Air Transport Association (IATA), which said after its publication that the list did not address the issue of how to bring safety conditions up to standard. The fact that there is no common list detailing what could lead to an airline’s inclusion, or what airlines need to do to warrant removal, is also a bone of contention.

However, far from damaging relations with Central Asia, the inclusion of Kazakhstan and Kyrgyzstan appears to have prompted a desire to improve ties, at least in the aviation sector. In addition, the experience of Kazakhstan shows that inclusion on the list can spur countries on to reform their aviation sectors. As well as Massimov’s decision to suspend the issuance of new licences, the Minister of Transport and Communications, Abelgazi Kusainov, reported that parliament was debating new draft legislation on developing the air industry, which had been drafted to incorporate the European Commission’s recommendations. He also predicted that the EU would remove Kazakh companies from the blacklist in the second half of 2010.

The Kyrgyz aviation authority has also said that it will work with the EU to get its airlines removed from the list. However, the pace of change in Kyrgyzstan has been slower, hampered by the country’s volatile political situation and relative poverty compared with Kazakhstan, where oil revenue has boosted the public finances. The consequences of its failure to modernise the sector were demonstrated in August 2008, when a Kyrgyz-registered plane operated by the private company Itek Air (which features on the EU blacklist) crashed shortly after take-off from Bishkek’s Manas airport with the loss of more than 60 lives – the country’s worst air disaster since independence. To date, the disappearance of Kyrgyz airlines from various iterations of the EU blacklist is attributable more to them having gone bust than to improvements in their safety record. That said, the authorities have now begun to address the issue of the ageing passenger fleet, and from 2010 aircraft older than 25 years will no longer be eligible for government inspection.