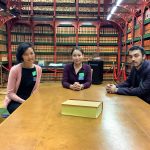 Home News Meetings in the Hague

On 15 October, the EUCAM research fellows visited The Hague for a series of meetings with governmental and civil society representatives. First they met with the Netherlands Helsinki Committee (NHC) where they learned about the NHC’s work with civil society organisations from Eastern Europe and Central Asia on rule of law and human rights.

At a subsequent meeting at the Netherlands Ministry of Foreign Affairs, Zhypariza Zhumagazieva, Bermet Zhumakadyr and Muslimbek Buriev presented their research to diplomats dealing with Europe and Central Asia. The latter explained Dutch foreign policy and quizzed the EUCAM fellows on current developments in their respective countries. A lively debate (especially among the researchers) on migration, human rights and religion followed.

Last but not least, the fellows enjoyed a tour through the Dutch Parliament, organised by senior parliamentary staff dealing with internal affairs. The fellows attended a plenary session to see ‘democracy in action’ and learned about the history of the institution while closing of the day at the parliamentary library (see picture). 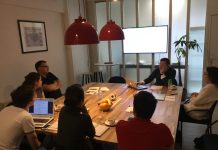