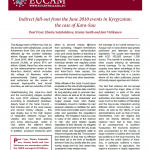 Home Research & Publications Commentaries Indirect fall-out from the June 2010 events in Kyrgyzstan: the case of...
EUCAM Commentary - No. 14 Download “Indirect fall-out from the June 2010 events in Kyrgyzstan: the case of Kara-Suu”

The Kyrgyz town of Kara-Suu lies on the border with Uzbekistan, some 25 kilometres from Osh, the city most affected by the conflict between ethnic Kyrgyz and Uzbeks on 10-17 June 2010. With a population of around 21,000, of which 67% are ethnic Uzbek, Kara-Suu also serves as the administrative centre of the Kara-Suu district, which includes the village of Nariman, with a predominantly Uzbek population and notorious as the scene of several high-profile and brutal murders, as well as suburbs of Osh.

Notwithstanding this, Kara-Suu itself and the surrounding villages avoided the June 2010 violence altogether. According to Abdukhamit Abdullaev, deputy head of the Sarai Council – that includes part of the local bazaar and several nearby villages – this was largely due to the high degree of integration between Kyrgyz and Uzbeks, who have been working and living side-by-side, unlike in Osh, where the different ethnic communities are clearly segregated. In addition, proactive measures were taken to prevent nearby tensions from spreading. Villagers themselves organised voluntary self-protection units, and chose leaders of standing to both Kyrgyz and Uzbeks to defuse any flashpoints. The heads of villages and individual streets met regularly jointly to discuss problems and difficulties faced. Following the closure of shops and Kara-Suu’s main bazaar, the communities themselves organised the provision of food and other essentials.

While officials of the Sarai Council place emphasis on the role of self-organisation, the Council itself must also take credit for its long-standing work to promote inter-ethnic peace as well as for its response to the Osh crisis. Its charismatic and hugely popular head, Akim Baatyr, immediately moved to mobilise his own personal networks to facilitate the work of the local communities and to maintain order and guarantee the population’s wellbeing. The hospital in Kara-Suu took in many of the victims of the violence in Osh, who were treated equally regardless of their ethnicity. As refugees and wounded arrived from the city, locals baked bread and slaughtered cattle to ensure everybody was fed. The provision and distribution of food was so effective that when aid in the form of foodstuffs arrived in Kara-Suu shortly after the June events, locals sent it to Osh, where they considered it was needed more.

After the violence stopped, the Council continued with its efforts to promote ethnic harmony. On 8 March 2011, the marriage of an Uzbek woman to a Kyrgyz man in Sarai district was greatly publicised and attended by local dignitaries. The couple was rewarded with KGS 100,000 (around 1,500 euros). This benefit is available to any other couple entering an ethnically mixed marriage. So far, three more couples have taken advantage of this policy. But more importantly, it is the symbolic effect this has in a country where all too often politicians pursue ethnically-based agendas and rhetoric.

The fact that violence did not spread much beyond the major cities of Osh and Jalalabad, in spite of the slow response by the Kyrgyz national authorities and international agencies, owes much to the tradition of friendship and the day-to-day integration among different ethnic communities in rural areas, as well as the efforts of local administrations such as that of Sarai. Nonetheless, even the regions that were not directly affected by the violence have had to bear many of its consequences. In southern Kyrgyzstan, the economic downturn was accompanied by the exodus of large numbers of Uzbeks who had held key positions in the local economy. But Sarai and the entire district of Kara-Suu, in particular, suffered a heavy blow. In addition to agriculture, the region’s economy is highly dependent on trade conducted through the Kara-Suu bazaar, the largest bazaar in all of Kyrgyzstan. Much of this trade involved the resale of goods imported by road from China to traders from across the border in Uzbekistan. After the June events, the market was closed down altogether for a month. More seriously, Uzbekistan responded to the flood of refugees by closing its borders, which remain so to this day. Although the Kara-Suu bazaar remains a bustling and welcoming market, selling local, Chinese, Turkish and other imported goods, nothing has been able to make up for the absence of Uzbek traders.

The Sarai Council, which enjoyed a budget of KGS 250 million in 2008-09, has only been able to collect KGS 74 million for this year, KGS 66 million less (one million euros) than the projected budget. Subsequently, many projects are paralysed, amongst them the construction of a new school that was due to cater for 470 children. Moreover, the local population has been particularly affected by the rise in prices for foodstuffs, especially those traditionally brought by Uzbek traders, such as tomatoes, which have reached record price levels. The local price of a sack of flour has more than doubled in the past year.

The region has seen almost nothing of the reconstruction programmes that international agencies have set up to assist Osh. The deputy head of the Sarai Council Abdukhamit Abdullaev complains of a ‘project sickness’ – programmes are often ill-directed, have limited impact and are always short-term. According to Abdullaev, to reduce dependence on the bazaar trade and the irregular remittances sent by migrant workers in Russia and elsewhere it is necessary to invest in infrastructure to re-establish the once-productive manufacture industry, vanished since Soviet times, and to provide secure employment for the region’s young population, who are often left with no choice but to emigrate abroad. The area is rich in raw agricultural products but suffers from a dearth of processing and packaging facilities, while there is a desperate need for modern tractors and other agricultural machinery. The Kyrgyz government is probably not in a position to fund such investment and despite the administration’s efforts, it has proved impossible to attract investment from the private sector – domestic or foreign.

A number of the houses destroyed in Osh in June 2010 have been replaced by temporary two-room buildings, thanks to the efforts of international donors, but much work still needs to be done. This remains the priority. The paradox that violence-prone regions are more likely to benefit from international aid than those communities that have a record of good governance and social peace promotion is not a new one for donor agencies. But if peace and stability are to be restored in southern Kyrgyzstan, more attention needs to be paid to the long-term development of local economies.

There is some hope that the border may reopen soon, with a visit by Kyrgyzstan’s Prime Minister Almazbek Atambaev to Tashkent scheduled later in the summer, but it is far from certain. It is necessary to invest efforts to reduce the dependence of the Sarai community and that of all of Kara-Suu on trade across the border. This would involve international financial support for investment, possibly by foreign companies working together with local entrepreneurs, but with initial grants and credits from international agencies. The many districts of Kyrgyzstan which like Kara-Suu provide a model for inter-ethnic relations cannot be taken for granted and only long-term investment and opportunities can ensure lasting stability.