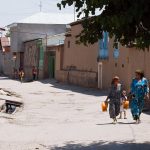 Migration is an integral part of Tajikistan’s society, economy, and politics. It is estimated that one million Tajik nationals entered Russia as labour migrants in 2017, with remittances amounting to over €2 billion, making Tajikistan the most remittance-dependent country in the world.

Labour migration has helped Tajikistan to survive economically and sustain itself as an independent state, but not without negative consequences for the Tajik society, particularly women. The majority of those immigrating to Russia are men, who oftentimes settle permanently in the host country and even establish new families; approximately one-third of Tajik migrants’ wives have been abandoned by their husbands. In the absence of men, women, particularly in agricultural communities, where three-fourths of the Tajik population resides, have had to assume the responsibility of providing economically for their families, often working in the field, in addition to household and care work. This has contributed to high dropout rates for girls in school (which also leads to early or under-age marriages), and an increasing number of children growing up with one or no parents.

In 2015, Russia amended its labour laws regarding foreign workers, introducing administrative fines and deportation for those who do not comply with residency rules. In addition, those who fail to pay taxes or administrative fines during their stay in Russia are placed on a temporary re-entry ban, ranging from 5 to 10 years. The IOM’s 2016 ‘Migrant Vulnerabilities’ report identified ‘re-entry ban migrants’ as one of the most vulnerable groups in Tajikistan. These migrants have no socio-economic status and very few job opportunities in Tajikistan, making them more vulnerable to radicalisation, while many are also in poor health, with a growing number suffering from tuberculosis or HIV.

The European Union (EU) is an important donor to Tajikistan, with €251 million committed for the period 2014-20 under the Development Cooperation Instrument (DCI). Its multi-annual indicative programme for Tajikistan focuses on health, education, and rural development. In 2021, it is expected that the EU will launch a new, all-encompassing Neighbourhood, Development and International Cooperation Instrument that will replace the DCI and other regional and thematic cooperation instruments and will have a strong emphasis on migration and mobility. However, it is still unclear whether the instrument will only focus on the impact of migration on Europe or also on the negative consequences of labour migration in Central Asia. At the same time, the EU is working on its new EU-Central Asia strategy, which will be launched in 2019.

First, the EU should help Tajikistan’s authorities in offering opportunities for returned migrants. Tajikistan has seen a large influx of returning labour migrants with re-entry bans in recent years – in 2016, the number of Tajiks on the ban list was over 300,000, according to Tajik Migration Services. This has severely impacted the Tajik economy, which has witnessed a 50 percent decrease in remittances since 2014, according to the IOM. Moreover, most returnees face unemployment at home. To improve the business atmosphere and provide migrants with employment opportunities at home, the EU could encourage amendments to Tajik tax law to provide tax breaks for re-entry banned migrants establishing small businesses, especially in rural areas. To this aim, the EU could provide technical assistance, judicial advice, and capacity-building to relevant Tajik authorities.

Second, the EU should focus on technical vocational education training (TVET) support for labour migrants. Tajikistan’s labour force is mainly made up of low-skilled workers. Roughly 40 percent of Tajikistan’s workforce seeks employment abroad, and many do so immediately after completing secondary school. Chances of employment would likely increase if the Tajik labour force possessed relevant qualifications. The EU should increase its support for TVET in Tajikistan, as many technical/vocational lyceums are drastically underfunded and many are closing down. Sectors such as construction, welding, and farming, among others, could offer job opportunities for locals and returnees if they are provided with the right skills. Tajikistan’s capital Dushanbe, in particular, is undergoing an urban building boom with high-rise construction sites mushrooming in the heart of the capital, and there is growing demand for qualified construction workers. By supporting technical and vocational education, the EU could help returnees acquire the right skills and find jobs, while allowing companies in high growth sectors to access qualified talent, which would, in turn, boost their growth and help them create more jobs.

Third, the EU should support women who have been divorced/abandoned by labour migrants. Although the law guarantees equal inheritance and rights, it is common practice for women to be denied any property rights from their parents or husbands. More and more Tajik wives are abandoned by their husbands who have migrated to Russia. According to IOM’s 2016 Migrant Vulnerabilities report, over 50 percent of male migrants engage in extramarital affairs abroad. Many of these women are left homeless and unemployed, and their lack of education and often early marriage only worsen their situation. EU supported female-led business programmes, through cooperation with local stakeholders, could assist the creation of collectives in rural communities made up of vulnerable women. These female collectives, ranging from small businesses’ representatives to traders and farmers, could be provided with material and financial assistance. In supporting female-led businesses, the EU would promote gender equality and rural development, which are crucial for the development of the country.

Migration affects all aspects of Tajik society. While migration provides migrants and their families with a basic income, it also has negatively impacted social dynamics in the country. Re-entry ban migrants, abandoned wives of labour migrants and low-skilled workers are amongst the most vulnerable groups. In order to really help Tajikistan, the EU’s new strategy and development assistance approach should focus on curtailing the negative impact of labour migration. Support could be delivered directly via the EU Delegation in Tajikistan or through projects, which can be implemented by local and international partners working on migration in Tajikistan. Supporting national programmes that provide direct assistance to labour migrants and other vulnerable groups would encourage social and economic development, as well as uphold the human dignity and well-being of migrants. In the end, it should be ‘home best’ for Tajiks instead of toiling ‘North and West’.