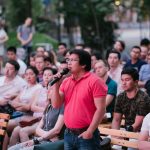 Home Research & Publications Commentaries Civil society in Uzbekistan: Building from the ground up
EUCAM Commentary - No. 31

Uzbekistan is changing. President Shavkat Mirziyoyev has initiated a series of economic and governance reforms, and the country’s new direction has opened up space for civil society to develop, almost from scratch. In order to build an effective and vibrant civil society, Uzbekistan needs to develop the capacity of NGOs, boost critical thinking, and monitor government reform. However, this is easier said than done, as it is still unclear what direction political reform will take, while, at the same time, conservative religious views are becoming increasingly dominant. In Central Asia and beyond, developments in Uzbekistan are being closely watched with a mixture of hope and cautious pessimism. The European Union (EU) will likely want to go beyond its currently-modest engagement. One way to do this would be to actively support new civil society initiatives in Uzbekistan.

Until 2005, Uzbekistan had followed a post-Soviet trajectory of slow and often hampered economic reform, with little political renewal. Any modest progress that had been achieved quickly evaporated during the May 2005 Andijan events, where government forces opened fire on protesters resulting in many casualties and mass arrests. Uzbekistan closed down most of its international cooperation, while, internally, new legislation increased censorship and government control, worsening conditions for civil society advancement.

During the past two years, Uzbekistan has taken a new course: most political prisoners have been released; some steps have been taken to liberalize media, and the government is adopting a more supportive attitude towards civil society. The presidential decree ‘On measures for strengthening civil society institutes’ role in democratization processes’ of April 2018 is seen as a firm step towards setting the foundations to build dialogue between civil society and the government and review bureaucratic procedures that curtail the activities of NGOs.

Following the lifting of sanctions, between 2008 and 2010 the European Union started to increase funding for development projects in Uzbekistan. For the period 2014-20, funding is being channeled through the Development Cooperation Instrument (DCI), which envisages €168 million for sustainable rural development – a share of these funds is reserved for civil society. In addition, the EU supports Uzbekistan’s civil society through the European Instrument for Democracy and Human Rights (EIDHR). Brussels and Tashkent are also planning to start discussing an Enhanced Partnership and Cooperation Agreement (EPCA) to replace the current standard partnership cooperation agreement. An EPCA (which has already been concluded with Kazakhstan and is currently being negotiated with Kyrgyzstan) would establish closer ties between the EU and Uzbekistan.

The combination of available funding mechanisms, Uzbek interest in reform and plans for an EPCA create possibilities for increased EU support for Uzbek civil society development. However, whereas the EU can support elements of this civil society development process, it needs to be essentially an Uzbek home-grown bottom-up process. In this regard, Uzbekistan faces three main challenges:

First, developing the capacities of NGOs, particularly secular civil society organisations. There are two types of organisations within the 9,200 NGOs registered in Uzbekistan: conservative religious and secular organisations. While religious congregations and mahallas (local neighbourhood self-governing bodies, often supported by the state) have become more vocal in promoting conservative values, options for secular civil society organisations remain limited due to a lack of technical and financial support. Represented by old and reputable individuals, mahallas have been known for keeping order in neighbourhoods, upholding morality, and promoting patriarchal traditions. However, they are increasingly seen as controlling and their outdated approaches are being more and more criticised, leading to a growing demand for less traditional alternative civil society structures. Recently, the state run programme ‘obod mahalla’ (flourishing neighbourhood) was criticized by bloggers for its lack of public consultation and inclusion in the decision-making process related to neighbourhoods’ urban planning.

Civil secular engagement is often channelled through social media, where discussions take place regarding local authorities’ short-sighted policies or eyebrow raising comments by religious leaders. However, these debates – often fuelled by public outrage – are short-lived and do not yield concrete results. Uzbekistan largely lacks a sustainable secular civil society that can engage with the authorities around social issues at the local and national levels. There is interest among the youth to create NGOs, but they need training and especially technical and financial support. Here EIDHR and other EU funding is essential.

Second, creating an environment for sparking critical thinking. There are almost no think tanks in Uzbekistan that offer critical and independent analyses. Uzbekistan’s higher education system also lacks political science subjects, vital to establish a critical mass of analysts. Meanwhile, investigative journalism is also largely absent from secular-oriented media. This is a problem as ‘democracy phobic’ views are on the rise among both the apolitical and conservative parts of the population. These views are supported by newly-created religious media, which offer conservative imams platforms to speak against divorce, male-gynaecologists or LGBTs, and which are managing to gather many followers.

Establishing political science departments in social studies faculties at Uzbekistan’s universities would be an essential step. Uzbekistan has indicated that it is open to receive assistance in education and to hire foreign professors and lecturers. The establishment of think tanks is also important to provide knowledge and insights to media outlets, which, in turn, also need to become more professional and offer more accurate fact-based reporting. The EU could help by sharing its experience through media training programmes (via international media-focused NGOs) and providing funding for the establishment of new research centres within universities (the Erasmus+ framework comes to mind) or independent research and education platforms.

Third, establishing a civil society platform for NGOs, think tanks and media organisations to monitor government activity. In the past two years, Uzbekistan has introduced several reforms and amended legislation, but there has been no analysis or monitoring of their implementation or potential or real impact on society. Regular input from NGOs, think tanks and media could help the implementation of those state programmes that are deemed useful by civil society. While the Uzbek government has indicated that it wishes to cooperate with civil society, it remains to be seen whether they will indeed share relevant information for effective democratic reform monitoring.

Next to EU funding for NGOs, Uzbek civil society can learn from the EU’s (and other international actors’) experiences. One interesting model is the Eastern Partnership Civil Society Forum, made up of NGOs from the EU and six East European countries. The Forum developed a common monitoring mechanism that can measure and compare democracy progress across several indicators in all participating countries. Uzbek think tanks and civil society could use such a mechanism at a national level. Finally, Uzbek civil society could learn from its counterparts in other countries, such as Ukraine for example, where many new civil society initiatives, which perform monitoring exercises, were established after the 2014 Euromaidan revolution.

NGO capacity-building, critical thinking and monitoring are essential if a secular-oriented, independent and productive civil society is to emerge. Such a development partly depends on the space offered by the new Uzbek leadership, but more importantly, it depends on the will of the population, especially young people, to be actively engaged in society through activism, community service, research, and so on. As Uzbeks reform their society, international partners’ support is essential. Uzbekistan will need to carefully consider what external help is useful: support for a strengthened public voice will hopefully be one of them.