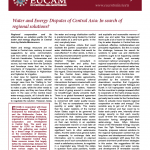 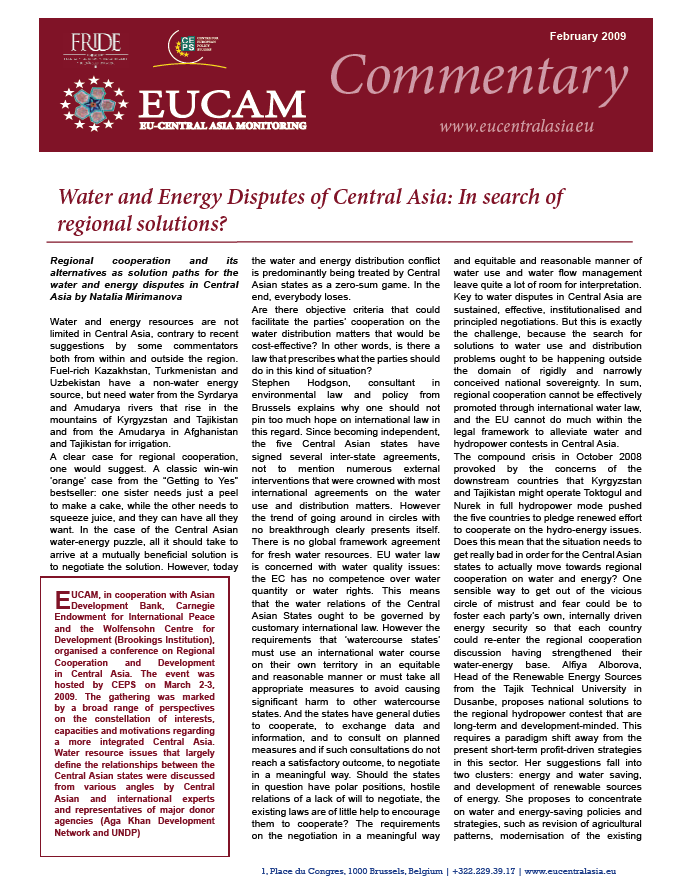 Download “Water and Energy Disputes of Central Asia: in search of regional solutions?”

Water and energy resources are not limited in Central Asia, contrary to recent suggestions by some commentators both from within and outside the region. Fuel-rich Kazakhstan, Turkmenistan and Uzbekistan have a non-water energy source, but need water from the Syrdarya and Amudarya rivers that rise in the mountains of Kyrgyzstan and Tajikistan and from the Amudarya in Afghanistan and Tajikistan for irrigation.

A clear case for regional cooperation, one would suggest. A classic win-win ‘orange’ case from the “Getting to Yes” bestseller: one sister needs just a peel to make a cake, while the other needs to squeeze juice, and they can have all they want. In the case of the Central Asian water-energy puzzle, all it should take to arrive at a mutually beneficial solution is to negotiate the solution. However, today the water and energy distribution conflict is predominantly being treated by Central Asian states as a zero-sum game. In the end, everybody loses.

Are there objective criteria that could facilitate the parties’ cooperation on the water distribution matters that would be cost-effective? In other words, is there a law that prescribes what the parties should do in this kind of situation?

Stephen Hodgson, consultant in environmental law and policy from Brussels explains why one should not pin too much hope on international law in this regard. Since becoming independent, the five Central Asian states have signed several inter-state agreements, not to mention numerous external interventions that were crowned with most international agreements on the water use and distribution matters. However the trend of going around in circles with no breakthrough clearly presents itself. There is no global framework agreement for fresh water resources. EU water law is concerned with water quality issues: the EC has no competence over water quantity or water rights. This means that the water relations of the Central Asian States ought to be governed by customary international law. However the requirements that ‘watercourse states’ must use an international water course on their own territory in an equitable and reasonable manner or must take all appropriate measures to avoid causing significant harm to other watercourse states. And the states have general duties to cooperate, to exchange data and information, and to consult on planned measures and if such consultations do not reach a satisfactory outcome, to negotiate in a meaningful way. Should the states in question have polar positions, hostile relations of a lack of will to negotiate, the existing laws are of little help to encourage them to cooperate? The requirements on the negotiation in a meaningful way and equitable and reasonable manner of water use and water flow management leave quite a lot of room for interpretation. Key to water disputes in Central Asia are sustained, effective, institutionalised and principled negotiations. But this is exactly the challenge, because the search for solutions to water use and distribution problems ought to be happening outside the domain of rigidly and narrowly conceived national sovereignty. In sum, regional cooperation cannot be effectively promoted through international water law, and the EU cannot do much within the legal framework to alleviate water and hydropower contests in Central Asia.

The compound crisis in October 2008 provoked by the concerns of the downstream countries that Kyrgyzstan and Tajikistan might operate Toktogul and Nurek in full hydropower mode pushed the five countries to pledge renewed effort to cooperate on the hydro-energy issues. Does this mean that the situation needs to get really bad in order for the Central Asian states to actually move towards regional cooperation on water and energy? One sensible way to get out of the vicious circle of mistrust and fear could be to foster each party’s own, internally driven energy security so that each country could re-enter the regional cooperation discussion having strengthened their water-energy base. Alfiya Alborova, Head of the Renewable Energy Sources from the Tajik Technical University in Dusanbe, proposes national solutions to the regional hydropower contest that are long-term and development-minded. This requires a paradigm shift away from the present short-term profit-driven strategies in this sector. Her suggestions fall into two clusters: energy and water saving, and development of renewable sources of energy. She proposes to concentrate on water and energy-saving policies and strategies, such as revision of agricultural patterns, modernisation of the existing irrigation systems and, most importantly, changing people’s habits as regards the use of water. Renewable sources of energy – solar and wind – can be easily and successfully developed in all Central Asian countries. Decentralisation of energy supply that renewable energy sources provide for is the way to the energy security, suggests Ms. Akhrorova. What is important is that this approach strengthens water-energy autonomy of each country but not at the expense of others. The first steps and proposals that were developed in cooperation between academic institutes and universities from Central Asia (Tajikistan and Kazakhstan) and Europe (Greece, Sweden and Finland) include a strategy for the creation of market incentives to develop renewable energy, new relevant legislation, training for the new cadre and scientific research.

Aly Nazerali, European and Multilateral Representative and COE of the Aga Khan Development Network in London proposed to focus on the water and energy needs of individual families and livelihoods and to go local and supply those at the geographic, economic and political periphery with small yet reliable hydropower mini-plants and local water systems. Grand regional cooperation or national energy and water issues take a long time to be agreed upon and even more time to attract investments and actually start producing electricity, while people’s well-being, health and development, especially of the millions in rural and mountainous areas, are being harmed on a daily basis. Those who are systematically deprived of access to electricity and water are the focal point for the Aga Khan Development Fund assistance programmes. UNDP supports the smallscale and local focus of work on energy and water security, as well as on the promotion of renewable energy sources. But it stresses that without radical reform of the energy sectors, most importantly breaking the monopolies and introducing competition on the supply side and introducing energy-saving and metering programmes on the consumer side, long-term sustainable solution to the permanent crises will not be reached. From the UNDP perspective, which was presented by Ben Slay, Senior Economist, UNDP Bureau for Europe and CIS, Bratislava, while the most important elements of the response to water, energy and food insecurities in Central Asia should have a national character, the regional focus should be continued, to provide joint and continual monitoring of, and early warning concerning hydrological trends in the reservoirs and rivers of regional importance, economic developments, environmental and climate forecast, etc. among other cooperative measures.