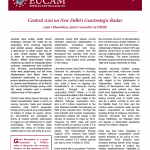 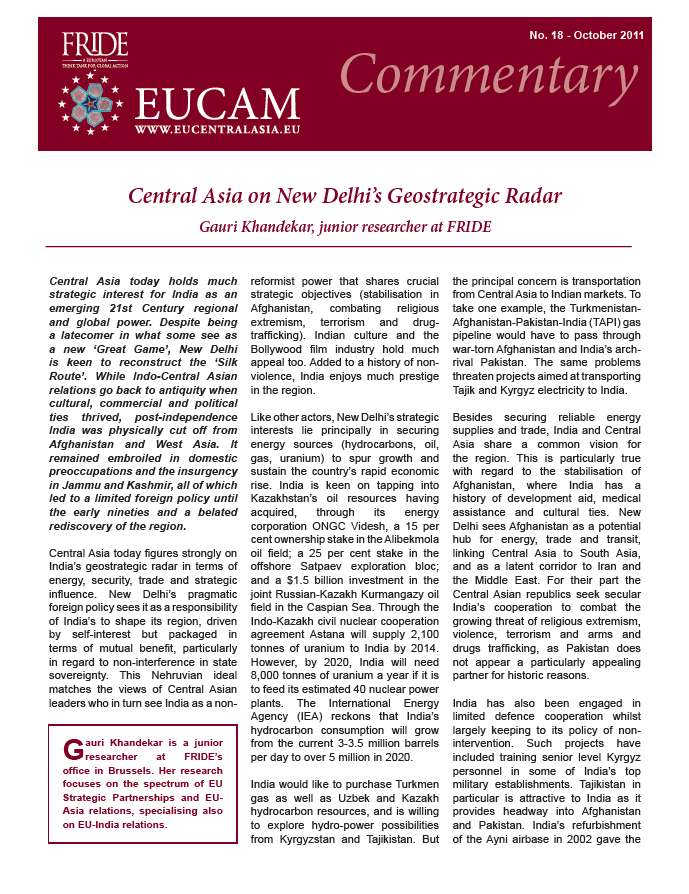 Central Asia today holds much strategic interest for India as an emerging 21st Century regional and global power. Despite being a latecomer in what some see as a new ‘Great Game’, New Delhi is keen to reconstruct the ‘Silk Route’. While Indo-Central Asian relations go back to antiquity when cultural, commercial and political ties thrived, post-independence India was physically cut off from Afghanistan and West Asia. It remained embroiled in domestic preoccupations and the insurgency in Jammu and Kashmir, all of which led to a limited foreign policy until the early nineties and a belated rediscovery of the region.

Central Asia today figures strongly on India’s geostrategic radar in terms of energy, security, trade and strategic influence. New Delhi’s pragmatic foreign policy sees it as a responsibility of India’s to shape its region, driven by self-interest but packaged in terms of mutual benefit, particularly in regard to non-interference in state sovereignty. This Nehruvian ideal matches the views of Central Asian leaders who in turn see India as a non-reformist power that shares crucial strategic objectives (stabilisation in Afghanistan, combating religious extremism, terrorism and drug-trafficking). Indian culture and the Bollywood film industry hold much appeal too. Added to a history of nonviolence, India enjoys much prestige in the region.

Like other actors, New Delhi’s strategic interests lie principally in securing energy sources (hydrocarbons, oil, gas, uranium) to spur growth and sustain the country’s rapid economic rise. India is keen on tapping into Kazakhstan’s oil resources having acquired, through its energy corporation ONGC Videsh, a 15 per cent ownership stake in the Alibekmola oil field; a 25 per cent stake in the offshore Satpaev exploration bloc; and a $1.5 billion investment in the joint Russian-Kazakh Kurmangazy oil field in the Caspian Sea. Through the Indo-Kazakh civil nuclear cooperation agreement Astana will supply 2,100 tonnes of uranium to India by 2014. However, by 2020, India will need 8,000 tonnes of uranium a year if it is to feed its estimated 40 nuclear power plants. The International Energy Agency (IEA) reckons that India’s hydrocarbon consumption will grow from the current 3-3.5 million barrels per day to over 5 million in 2020.

India would like to purchase Turkmen gas as well as Uzbek and Kazakh hydrocarbon resources, and is willing to explore hydro-power possibilities from Kyrgyzstan and Tajikistan. But the principal concern is transportation from Central Asia to Indian markets. To take one example, the Turkmenistan- Afghanistan-Pakistan-India (TAPI) gas pipeline would have to pass through war-torn Afghanistan and India’s archrival Pakistan. The same problems threaten projects aimed at transporting Tajik and Kyrgyz electricity to India.

Besides securing reliable energy supplies and trade, India and Central Asia share a common vision for the region. This is particularly true with regard to the stabilisation of Afghanistan, where India has a history of development aid, medical assistance and cultural ties. New Delhi sees Afghanistan as a potential hub for energy, trade and transit, linking Central Asia to South Asia, and as a latent corridor to Iran and the Middle East. For their part the Central Asian republics seek secular India’s cooperation to combat the growing threat of religious extremism, violence, terrorism and arms and drugs trafficking, as Pakistan does not appear a particularly appealing partner for historic reasons.

India has also been engaged in limited defence cooperation whilst largely keeping to its policy of nonintervention. Such projects have included training senior level Kyrgyz personnel in some of India’s top military establishments. Tajikistan in particular is attractive to India as it provides headway into Afghanistan and Pakistan. India’s refurbishment of the Ayni airbase in 2002 gave the impression that it had secured its first foreign military base, however in 2010 New Delhi handed it back to the Tajik defence ministry.

In the complex web of relationships, India must balance the power-play between various actors in Central Asia – Russia and China, as well as the EU, the US, Pakistan, Iran and Turkey. It has followed two intersecting approaches: cooperation and competition.

India shares the concerns of China and Russia in regard to energy interests, Afghanistan, regional security and combating radical Islam. Like Russia and China, it does not promote democracy and human rights in the region. However, Russia is keen on balancing India against China, as are the Central Asian republics. India in turn offers the Central Asian republics an opportunity to reduce their dependence on Moscow. China and India strive for the same objectives of securing geoeconomic and geostrategic influence. In addition, China’s deepening relationship with Pakistan is also a concern for India. Although both China and India agree that there is enough room for both to develop without strict competition, they will continue to remain cautious of each other, particularly as India’s economic activities in Central Asia remain small compared to those of China. Overall, on economic matters all three ‘giants’ operate with a safe distance between them.

India’s involvement in existing regional security frameworks is welcomed by the Central Asian republics and promoted by Russia through the Shanghai Cooperation Organisation (SCO). In response China is pushing for Pakistan’s membership in the organisation. Both India and Pakistan gained observer status in July 2005, and India applied for full membership last year. But the SCO has little potential to operate effectively as a regional organisation for cooperation because it is often split between Russia’s aim of strengthening its strategic presence in the region and China’s plans for economic development. Entry of the India-Pakistan rivalry into the equation could render the SCO even more impotent. In light of the US and NATO withdrawal from Afghanistan, there might be room for the SCO to play a bigger role concerning its stability. This would be in India’s interest, but New Delhi does not want to jeopardise its new-found friendship with the US by aligning itself fully with the SCO. This is especially true since the SCO is largely unproven, and has yet to effectively engage in crisis response operations; it remains unclear whether the organisation has the mechanisms or mandate to do so.

Growing Indo-US relations have fostered greater understanding between the two especially on regional matters and increasingly so vis-à-vis Pakistan. In contrast, understanding and cooperation between the EU and India on regional (South Asian) matters is limited to occasional discussions: they rarely discuss Central Asia. In foreign affairs, New Delhi prefers to act alone and is not willing either to subscribe to any particular models or collaborate on them with Western actors. For instance, India is unwilling to engage actively in democracy promotion using sanctions or conditionality – Delhi believes it promotes democracy best by example. For India, engagement rather than isolation has been more effective, especially with authoritarian regimes where anti-India elements (such as insurgents) exist. The focus, it feels, should be placed on empowering civil society and education to bring about political development. India thus invites parliamentarians, diplomats and businessmen to visit its bustling Parliament and other politico-industrial venues, meet Indian politicians, the media and think-tanks. Over the years, there have also been educational exchanges between India and the Central Asian republics.

India is aware of the potential of Iran’s geostrategic position as an export route for Central Asian energy and natural resources, and is therefore unwilling to support the EU’s tough stance on Iran’s nuclear enrichment programme. However, as ‘natural partners’, the EU and India nonetheless can find a lot of commonalities in their approach with plenty of opportunities for coordination. The U.S. drawdown in Afghanistan for example could be a ground for stimulating greater synergies between the EU and India on the one hand, and the Central Asian republics on the other. The recently launched EU-India foreign policy dialogue could be the perfect platform for such issues.

As India and her foreign policy continue to develop, there will be no escaping entanglement in Central Asia’s ‘Great Game’. With greater conspicuousness, India’s strategic presence in the Central Asian republics will be felt by other actors, increasing competition and adding new options for the Central Asian countries to diversify relations. India’s challenge lies in exploiting opportunities for cooperation with all relevant players in Central Asia while minimising friction so as to build a geopolitical niche in the region in order to fulfil its interests.