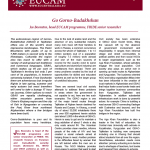 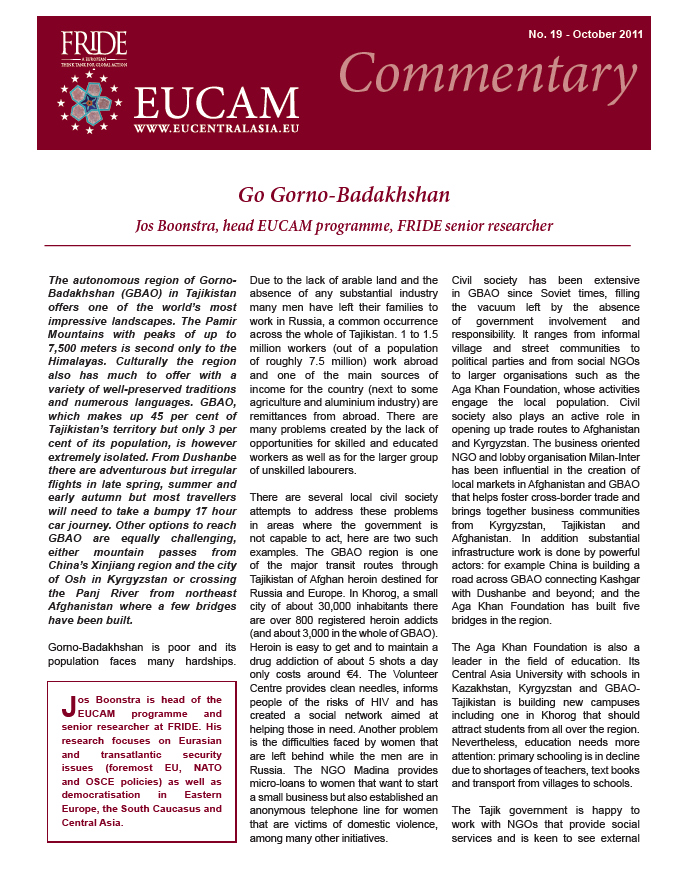 The autonomous region of Gorno-Badakhshan (GBAO) in Tajikistan offers one of the world’s most impressive landscapes. The Pamir Mountains with peaks of up to 7,500 meters is second only to the Himalayas. Culturally the region also has much to offer with a variety of well-preserved traditions and numerous languages. GBAO, which makes up 45 per cent of Tajikistan’s territory but only 3 per cent of its population, is however extremely isolated. From Dushanbe there are adventurous but irregular ﬂights in late spring, summer and early autumn but most travellers will need to take a bumpy 17 hour car journey. Other options to reach GBAO are equally challenging, either mountain passes from China’s Xinjiang region and the city of Osh in Kyrgyzstan or crossing the Panj River from northeast Afghanistan where a few bridges have been built.

Gorno-Badakhshan is poor and its population faces many hardships. Due to the lack of arable land and the absence of any substantial industry many men have left their families to work in Russia, a common occurrence across the whole of Tajikistan. 1 to 1.5 million workers (out of a population of roughly 7.5 million) work abroad and one of the main sources of income for the country (next to some agriculture and aluminium industry) are remittances from abroad. There are many problems created by the lack of opportunities for skilled and educated workers as well as for the larger group of unskilled labourers.

There are several local civil society attempts to address these problems in areas where the government is not capable to act, here are two such examples. The GBAO region is one of the major transit routes through Tajikistan of Afghan heroin destined for Russia and Europe. In Khorog, a small city of about 30,000 inhabitants there are over 800 registered heroin addicts (and about 3,000 in the whole of GBAO). Heroin is easy to get and to maintain a drug addiction of about 5 shots a day only costs around €4. The Volunteer Centre provides clean needles, informs people of the risks of HIV and has created a social network aimed at helping those in need. Another problem is the diffculties faced by women that are left behind while the men are in Russia. The NGO Madina provides micro-loans to women that want to start a small business but also established an anonymous telephone line for women that are victims of domestic violence, among many other initiatives.

Civil society has been extensive in GBAO since Soviet times, flling the vacuum left by the absence of government involvement and responsibility. It ranges from informal village and street communities to political parties and from social NGOs to larger organisations such as the Aga Khan Foundation, whose activities engage the local population. Civil society also plays an active role in opening up trade routes to Afghanistan and Kyrgyzstan. The business oriented NGO and lobby organisation Milan-Inter has been inﬂuential in the creation of local markets in Afghanistan and GBAO that helps foster cross-border trade and brings together business communities from Kyrgyzstan, Tajikistan and Afghanistan. In addition substantial infrastructure work is done by powerful actors: for example China is building a road across GBAO connecting Kashgar with Dushanbe and beyond; and the Aga Khan Foundation has built fve bridges in the region.

The Aga Khan Foundation is also a leader in the feld of education. Its Central Asia University with schools in Kazakhstan, Kyrgyzstan and GBAO Tajikistan is building new campuses including one in Khorog that should attract students from all over the region. Nevertheless, education needs more attention: primary schooling is in decline due to shortages of teachers, text books and transport from villages to schools.

The Tajik government is happy to work with NGOs that provide social services and is keen to see external donors investing in GBAO. Despite serious budget constraints they try to co-fund projects and are open to new ideas, as long as they are non-political and do not in any way touch upon security-related matters. There are no politically oriented NGOs or research centres in GBAO, nor any substantial independent media outlets. Spreading information through newspapers is diffcult due to the terrain so radio is an important means of communication. However, no independent radio stations have received licences. While plans for independent media outlets exist – such as setting up a wider radio broadcast also covering the Badakhshan area in Afghanistan – they need approval from the authorities and funding from outside donors.

Most experts agree that the region’s autonomous status grants some recognition to the Gorno-Badakhshan culture and languages. For others the autonomy only exists on paper. Decisions are made in Dushanbe and the Tajik president appoints the governor for the region. Yet the Badakhshani have to some degree been able to resist direct government inﬂuence, even after Dushanbe sent the police and military to get a tighter grip on the region. Following large public protests the government withdrew most of the security forces: although partly because the radical Islamic threat is lower in GBAO than in other parts of the country. Meanwhile many in the region view autonomy as a way to resist corruption which they see as an outside phenomenon.

Due to its remoteness only few tourists fnd their way to GBAO but this also applies to badly needed donor support. Those that are present play a crucial role in helping local authorities and civil society organisations in particular to provide basic services. By far the most inﬂuential donor is the Aga Khan Foundation. Many Badakhshani claim it has been instrumental in their survival both after Tajik independence and during the civil war through its support for education, banking and infrastructure, but also indirectly by contributing to the religious revival of the Ismaili Islam (an offspring of Shiite Islam).

The German development agency GIZ is another well respected and visible donor that has an offce in GBAO’s capital Khorog. Smaller or occasional donors such as several UN programmes, the OSCE, USAID, Oxfam/Novib, the Open Society Foundation, the UK’s development agency DFID and funding from EU member states such as the Czechs and Poles also have a positive impact. Some local NGOs now also receive EU funding, however bureaucratic procedures are seen as troublesome as is the need to fnd co-funding, and the projects are often short-term with little follow-up. An increased European presence in Tajikistan should over time help build a more structured and better-informed relationship between European donors and civil society.

Civil society organisations are thankful for the donor support they have received, especially those schemes that involve capacity-building, as these mean they can provide professional assistance themselves as long as they have the funding. But there is also criticism. Some argue that external donors are too close to the Tajik government and should instead invest directly in the people. Others say that donors do not make an effort to understand the dynamics within civil society and always fund the ‘usual suspects’ those organisations that are professional and know how to win funding. Or they say that most of the money remains in the donor country through expensive contracts given to western consultants. But the greatest short-term problem seems to be the economic crisis, some donors have already indicated that they will either scale down their activities or stop altogether. So in this way the crisis that primarily affected Europe and the U.S. has even found its way to isolated GBAO.

GBAO is a region where donor aid can achieve visible results. Projects do not need to be large in size but must be sustainable over time and responsive to local needs. This requires the in-depth involvement of donors, who need to increasingly engage with the region through visits and identifying key local partners and programmes. So, go Gorno-Badakhshan!

This commentary is based on a series of interviews held in Khorog with civil society representatives, political activists and donors.