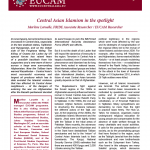 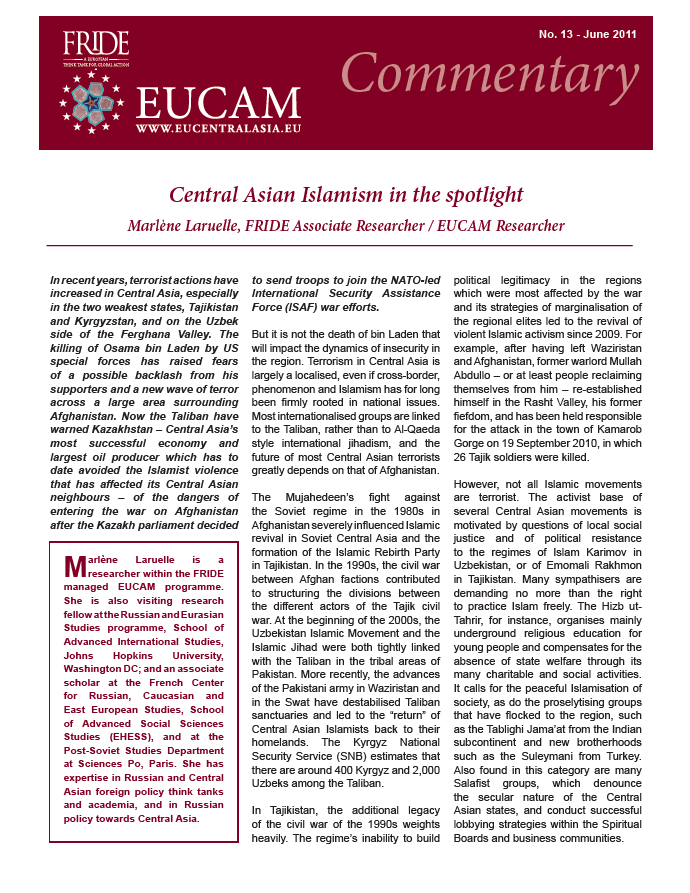 In recent years, terrorist actions have increased in Central Asia, especially in the two weakest states, Tajikistan and Kyrgyzstan, and on the Uzbek side of the Ferghana Valley. The killing of Osama bin Laden by US special forces has raised fears of a possible backlash from his supporters and a new wave of terror across a large area surrounding Afghanistan. Now the Taliban have warned Kazakhstan – Central Asia’s most successful economy and largest oil producer which has to date avoided the Islamist violence that has affected its Central Asian neighbours – of the dangers of entering the war on Afghanistan after the Kazakh parliament decided to send troops to join the NATO-led International Security Assistance Force (ISAF) war efforts.

But it is not the death of bin Laden that will impact the dynamics of insecurity in the region. Terrorism in Central Asia is largely a localised, even if cross-border, phenomenon and Islamism has for long been firmly rooted in national issues. Most internationalised groups are linked to the Taliban, rather than to Al-Qaeda style international jihadism, and the future of most Central Asian terrorists greatly depends on that of Afghanistan.

The Mujahedeen’s fight against the Soviet regime in the 1980s in Afghanistan severely influenced Islamic revival in Soviet Central Asia and the formation of the Islamic Rebirth Party in Tajikistan. In the 1990s, the civil war between Afghan factions contributed to structuring the divisions between the different actors of the Tajik civil war. At the beginning of the 2000s, the Uzbekistan Islamic Movement and the Islamic Jihad were both tightly linked with the Taliban in the tribal areas of Pakistan. More recently, the advances of the Pakistani army in Waziristan and in the Swat have destabilised Taliban sanctuaries and led to the “return” of Central Asian Islamists back to their homelands. The Kyrgyz National Security Service (SNB) estimates that there are around 400 Kyrgyz and 2,000 Uzbeks among the Taliban.

In Tajikistan, the additional legacy of the civil war of the 1990s weights heavily. The regime’s inability to build political legitimacy in the regions which were most affected by the war and its strategies of marginalisation of the regional elites led to the revival of violent Islamic activism since 2009. For example, after having left Waziristan and Afghanistan, former warlord Mullah Abdullo – or at least people reclaiming themselves from him – re-established himself in the Rasht Valley, his former fiefdom, and has been held responsible for the attack in the town of Kamarob Gorge on 19 September 2010, in which 26 Tajik soldiers were killed.

However, not all Islamic movements are terrorist. The activist base of several Central Asian movements is motivated by questions of local social justice and of political resistance to the regimes of Islam Karimov in Uzbekistan, or of Emomali Rakhmon in Tajikistan. Many sympathisers are demanding no more than the right to practice Islam freely. The Hizb ut-Tahrir, for instance, organises mainly underground religious education for young people and compensates for the absence of state welfare through its many charitable and social activities. It calls for the peaceful Islamisation of society, as do the proselytising groups that have flocked to the region, such as the Tablighi Jama’at from the Indian subcontinent and new brotherhoods such as the Suleymani from Turkey. Also found in this category are many Salafist groups, which denounce the secular nature of the Central Asian states, and conduct successful lobbying strategies within the Spiritual Boards and business communities.

The Tajik authorities – as well as the Uzbek government – have toughened their approach toward religion over recent years. In the autumn of 2010, 1,400 Tajik theology students who had gone to Egypt, Iran, Turkey, and Pakistan to study were repatriated. The majority of them are now refused employment as their foreign sojourn has made them suspects, which only serves to swell the ranks of clandestine imams. In February 2011, the security services further tightened their control over religious education and mosques. Women in particular are targeted and for a few years now have been prohibited from attending mosques. Arbitrary arrests and trumped up trials are also growing in number.

Today, there is in Central Asia a general atmosphere of re-traditionalising cus-toms, of valorising the daily practice of Islam, and of making family, political, and commercial practices more moral and Islamic. But valorising Islam is not linked to political Islamism: the part of the population that wants a more visible Islam and the Spiritual Boards – the administrative organs managing Islam inherited from the Soviet regime – call for a peaceful re-Islamisation of society, focusing on morality in social and family relations, social justice and the fight against corruption, often without a political agenda per se.

It is crucial not to confuse a return to faith, Islamism, and terrorism—amalgams on which all Central Asian regimes are used to build their legitimacy. Calls to Islamism are very diverse and not necessarily violent, and militants in the region are above all motivated by local social and political issues. An increasingly authoritarian management of religious freedom is unable to solve the region’s many problems, quite the contrary. In Uzbekistan and Tajikistan in particular, arbitrary measures taken in the name of the fight on terror against people practicing peaceful Islam only aggravate social tensions.

The international community must not accept Central Asian authorities’ attempts to blame “religious extremists” for all of the region’s problems and the instability affecting their countries. It is also necessary to point to the role of criminal groups, drug trafficking, poverty and many other social and economic issues. It is time for the international community to start paying attention to the social background of Islamism too, and not only its ideological side. The struggle against poverty and corruption must be at the core of international action.