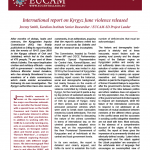 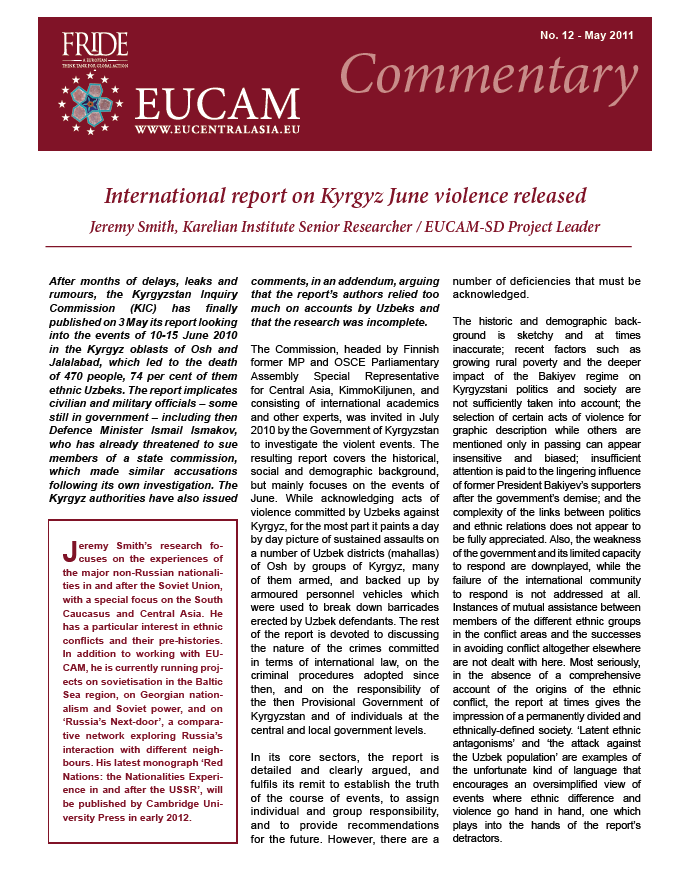 After months of delays, leaks and rumours, the Kyrgyzstan Inquiry Commission (KIC) has finally published on 3 May its report looking into the events of 10-15 June 2010 in the Kyrgyz oblasts of Osh and Jalalabad, which led to the death of 470 people, 74 per cent of them ethnic Uzbeks. The report implicates civilian and military officials – some still in government – including then Defence Minister Ismail Ismakov, who has already threatened to sue members of a state commission, which made similar accusations following its own investigation. The Kyrgyz authorities have also issued comments, in an addendum, arguing that the report’s authors relied too much on accounts by Uzbeks and that the research was incomplete.

The Commission, headed by Finnish former MP and OSCE Parliamentary Assembly Special Representative for Central Asia, KimmoKiljunen, and consisting of international academics and other experts, was invited in July 2010 by the Government of Kyrgyzstan to investigate the violent events. The resulting report covers the historical, social and demographic background, but mainly focuses on the events of June. While acknowledging acts of violence committed by Uzbeks against Kyrgyz, for the most part it paints a day by day picture of sustained assaults on a number of Uzbek districts (mahallas) of Osh by groups of Kyrgyz, many of them armed, and backed up by armoured personnel vehicles which were used to break down barricades erected by Uzbek defendants. The rest of the report is devoted to discussing the nature of the crimes committed in terms of international law, on the criminal procedures adopted since then, and on the responsibility of the then Provisional Government of Kyrgyzstan and of individuals at the central and local government levels.

In its core sectors, the report is detailed and clearly argued, and fulfils its remit to establish the truth of the course of events, to assign individual and group responsibility, and to provide recommendations for the future. However, there are a number of deficiencies that must be acknowledged.

The historic and demographic background is sketchy and at times inaccurate; recent factors such as growing rural poverty and the deeper impact of the Bakiyev regime on Kyrgyzstani politics and society are not sufficiently taken into account; the selection of certain acts of violence for graphic description while others are mentioned only in passing can appear insensitive and biased; insufficient attention is paid to the lingering influence of former President Bakiyev’s supporters after the government’s demise; and the complexity of the links between politics and ethnic relations does not appear to be fully appreciated. Also, the weakness of the government and its limited capacity to respond are downplayed, while the failure of the international community to respond is not addressed at all. Instances of mutual assistance between members of the different ethnic groups in the conflict areas and the successes in avoiding conflict altogether elsewhere are not dealt with here. Most seriously, in the absence of a comprehensive account of the origins of the ethnic conflict, the report at times gives the impression of a permanently divided and ethnically-defined society. ‘Latent ethnic antagonisms’ and ‘the attack against the Uzbek population’ are examples of the unfortunate kind of language that encourages an oversimplified view of events where ethnic difference and violence go hand in hand, one which plays into the hands of the report’s detractors.

In its official response to the report the Government of Kyrgyzstan raises all of these issues, and ultimately pours scorn on the Commission, accusing it of following a ‘simplistic numerical approach’ and some of its members of lacking ‘the utmost objectivity and impartiality’. Principally, criticism is aimed against the KIC’s highlighting acts of violence against Uzbeks while paying less attention to acts committed against ethnic Kyrgyz. The authorities make some valid points in their own defence when it comes to the government’s capacity to act at the time and on the measures taken since. But its insisting on giving greater prominence to Kyrgyz victims, while also blaming Bakiyev for the violence and the Uzbeks for initiating the events in Jalalabad and the Uzbek malhallas in Osh who were clearly well-organized and armed, the government is doing one or both of two things: deflecting attention away from its own inadequacies, or ensuring it does not lose face with the ethnic Kyrgyz population. Given the nationalist direction that Kyrgyz politics has taken since the summer of 2010, the latter is the more important and the more worrying motive. Much has changed in Kyrgyzstan since June 2010, not least the election of a new parliament. But the current Kyrgyz government needs to acknowledge the report, even if it disagrees with some of its conclusions. Much attention will be paid to the charge of crimes against humanity levelled against unknown forces in Osh by the KIC, but this should not cloud the deeper question of ethnic relations in the Central Asian republic.

In its submission, the government of Kyrgyzstan makes a barely disguised plea for international assistance to improve its capacity to respond to similar events should they emerge again: ‘even now we do not possess sufficient special resources, technology and appropriate equipment’. Given Kyrgyzstan’s situation it is not unreasonable to expect the international community to contribute expertise and equipment in these areas, and organisations such as the OSCE need to look carefully at their own readiness to respond to such crises.

But international support should not be unconditional. The higher number of investigations of crimes committed against ethnic Kyrgyz and, in particular, the greater seriousness being paid to sexual assault crimes since the turn of the year, show how adverse international pressure can impact domestic approaches. With all its imperfections, on the key questions the KIC report is thoroughly researched and balanced in its conclusions. Its main recommendations – most of which address real or perceived biases and mistreatment against Kyrgyzstan’s Uzbek minority – should be treated with the respect that an independent expert group with no axes to grind deserves. With Uzbek refugees only trickling back to their homes and nationalism and economic decline clouding Kyrgyzstan’s once bright horizon, the international community needs to keep up its pressure on the Kyrgyz government.