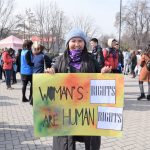 Home Research & Publications Commentaries Emancipation or back to the kitchen? Gender and civil society in Kyrgyzstan
- No. Download “Emancipation or back to the kitchen? Gender and civil society in Kyrgyzstan”

The Kyrgyz state in general and the healthcare system in particular were overwhelmed by the Covid-19 pandemic in the spring of 2020. When the state was unavailable to help, citizens helped themselves. The Centre of Youth Initiatives provided oxygen concentrators for Covid-19 patients. Aidana Sofia was one of the organisers. The Dariger (doctor) initiative arranged food, transportation and hazmat suits for medical personnel. It was launched by Aisha Sultanbekova, Aizada Sydykova, Malika Alenova and Meerim Zhetenbaeva. The Soobsha (together) group helped to recruit volunteers working in temporary hospitals. It was set up by the football player Aidana Ottorbaeva.

Women like these played a central role in the civic emergency response to the pandemic. Yet, women have so far been unable to translate their contribution into a more influential role in other sectors of society such as business and politics, which are dominated by men. Following the recent turbulent political events, it will be even more difficult for women to claim a seat at the table. What can civil society organisations do to expand women’s role?

Women have always played a significant role in Kyrgyz civil society. Many large non-governmental organisations are run by women. But this is the only sphere in Kyrgyzstan where women clearly predominate. ‘According to patriarchal attitudes and the sexist division of spheres, all merciful tasks should be given to women, and glory and power to men,’ says Dinara Kanybek kyzy, an analyst and urban activist from Bishkek.

Traditionally, men have monopolised most public spheres of society, especially politics and business. Patriarchal societal habits continue to infringe on women’s rights at all levels and are becoming more entrenched. According to the National Statistical Committee, in 2004, 19 per cent of deputies in local councils were women. In 2008, it had dropped to 17 per cent, in 2012 to 12 per cent and in 2016 to 10 per cent. Currently, there are no women representatives in 86 local councils, meaning that there is not a single female deputy in one in every fifth local council in Kyrgyzstan.

Some Kyrgyz officials justify this under-representation of women in politics by claiming that gender equality is a ‘foreign’, ‘Western’ vision. Every year, the peaceful march of the 8th of March to defend women’s rights, publicise gender-based issues and raise awareness regarding violence against women, is met with statements from government officials and members of the Jogorku Kenesh (the Kyrgyz Parliament) calling it ‘alien’ and ‘unsuitable for our culture’. Such attitudes and statements from high-ranking officials further undermine the work that is being done to promote women’s rights and empowerment.

Predominant social and cultural practices in Kyrgyzstan are full of stereotypes and systematically restrict women’s role. Women are unrecognised even when their contribution comes at such a critical time as during the Covid-19 pandemic. At the end of July 2020, then-President Soronbai Jeenbekov invited civil activists and volunteers to a dialogue. He expressed his gratefulness for their extensive and important job in helping doctors and citizens but did not mention the gender aspect of the civic response. Many local and international media agencies, such as BBC and Radio Free Europe, published heart-breaking stories about the civil response and volunteer movements during the healthcare crisis in Kyrgyzstan. Unfortunately, just like in official communications, the gender aspect of the civil response was not highlighted and thus taken for granted.

International organisations and local NGOs are active in promoting gender equality and women’s empowerment. There are several European Union-funded gender programmes aligned with the goals of the EU Gender Action Plan 2016-2020 being implemented in Kyrgyzstan. The European Union finances projects aimed at ending violence against girls and women in Kyrgyzstan and at empowering women and promoting their participation in decision-making processes. The EU also supports the development of small and medium-sized businesses that have a positive effect on the socio-economic status of women and youth. For example, through the Accelerate Prosperity ASIA project, the European Union, together with the Aga Khan Foundation, USAID, and other donors, invests up to $50,000 in business projects of women and youth in rural areas.

In October, Kyrgyzstan went through another revolution. Demonstrators unsatisfied with the results of the parliamentary election stormed the White House in Bishkek. The Central Electoral Commission of Kyrgyzstan annulled the election results, the government resigned, and 10 days later the president stepped down. After two weeks of chaos, the nationalist politician Sadyr Japarov, recently released from prison, became interim president and prime minister. While being interim, he launched the idea of holding a constitutional referendum. The new draft of the constitution was published on 17 November and includes 61 amendments. The powers of the president are strengthened, and many observers suspect that this is an attempt to create an authoritarian state.

In these uncertain times, it is important that civil society, in cooperation with donors like the EU, continue their efforts to strengthen the role of women in Kyrgyz society. The Kyrgyz authorities and international donors could take several steps to maintain the influential role that women played during the pandemic and to promote a more active role of women in the political and business sectors of society. Here are three such steps:

First, rethink the message of gender equality. At the moment, approaches to gender issues are often based on Western experiences and prescriptions, which are often not accepted by Kyrgyz society. In order to make the basic ideas of equality less alien to the average population, we need to rethink our agenda for Kyrgyzstan. Kyrgyz women need to develop their own approach. A message of gender equality should be understood by a girl in Bishkek and a girl living in a small village in the Osh oblast. This Kyrgyz native narrative has to be jointly developed by civil society and state actors, and address gender issues with a view to expanding women’s political, economic, personal, and social rights.

Second, raise awareness on gender equality. State and civil society should develop an information campaign to help the country better accept women leaders. They should do so by reminding people that strong, emancipated women are part of the Kyrgyz culture (especially in times of crisis). These campaigns could make reference to the essential role of women in the traditional nomadic lifestyle or the Soviet women who contributed to the Second World War effort. But they should also refer to women today who work in Russia or Turkey to provide for their families or the women in healthcare who stepped up during the pandemic. These media campaigns could be embedded into programmes focused on gender equality implemented by the government and NGOs. Moreover, journalists themselves should become more familiar with gender issues – editorial offices and websites are key tools to promote awareness on the role of women in society. For this reason, an idea would be for civil society to begin with projects that aim at reaching journalists.

Third, train people on gender equality. After rethinking the narrative and developing it, NGOs should train civil servants on gender equality (hopefully with international donor support). A national training programme to raise awareness within the public sector could result in less harassment and discrimination and better opportunities for women. Lastly, a lobby should be created to promote the establishment of a gender quota in politics and business, encouraging companies to ensure that half of the workers and top managers are women.

‘After the [Second World] War, women were sent back to the kitchen’, reads a quote on a Bishkek street wall written by the Kyrgyz feminist movement. When people talk about the Second World War, everyone remembers brave male soldiers, but not women, who also greatly contributed to the war effort. During the height of the Covid-19 epidemic, women stepped in and saved lives when the state could not. Yet, the rights of women and gender equality continue to be under threat. With the effort of civil society and additional programmes, this time women should not return to the kitchen but enter (local) governments and parliament.

Download “Emancipation or back to the kitchen? Gender and civil society in Kyrgyzstan”