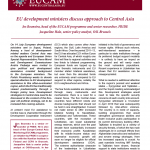 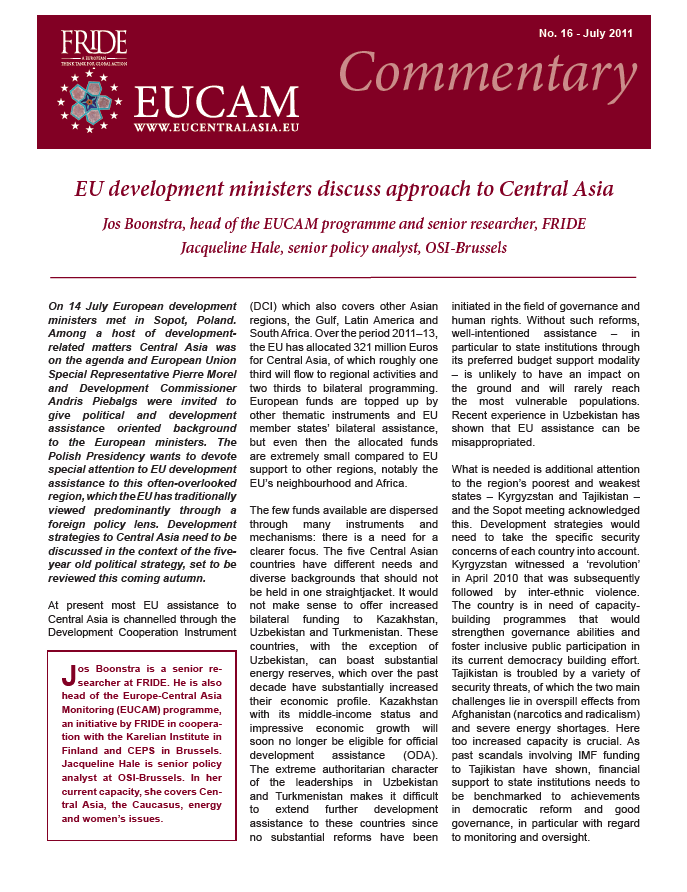 On 14 July European development ministers met in Sopot, Poland. Among a host of development-related matters Central Asia was on the agenda and European Union Special Representative Pierre Morel and Development Commissioner Andris Piebalgs were invited to give political and development assistance oriented background to the European ministers. The Polish Presidency wants to devote special attention to EU development assistance to this often-overlooked region, which the EU has traditionally viewed predominantly through a foreign policy lens. Development strategies to Central Asia need to be discussed in the context of the five-year old political strategy, set to be reviewed this coming autumn.

At present most EU assistance to Central Asia is channelled through the Development Cooperation Instrument (DCI) which also covers other Asian regions, the Gulf, Latin America and South Africa. Over the period 2011–13, the EU has allocated 321 million Euros for Central Asia, of which roughly one third will flow to regional activities and two thirds to bilateral programming. European funds are topped up by other thematic instruments and EU member states’ bilateral assistance, but even then the allocated funds are extremely small compared to EU support to other regions, notably the EU’s neighbourhood and Africa.

The few funds available are dispersed through many instruments and mechanisms: there is a need for a clearer focus. The five Central Asian countries have different needs and diverse backgrounds that should not be held in one straightjacket. It would not make sense to offer increased bilateral funding to Kazakhstan, Uzbekistan and Turkmenistan. These countries, with the exception of Uzbekistan, can boast substantial energy reserves, which over the past decade have substantially increased their economic profile. Kazakhstan with its middle-income status and impressive economic growth will soon no longer be eligible for official development assistance (ODA). The extreme authoritarian character of the leaderships in Uzbekistan and Turkmenistan makes it difficult to extend further development assistance to these countries since no substantial reforms have been initiated in the field of governance and human rights. Without such reforms, well-intentioned assistance – in particular to state institutions through its preferred budget support modality – is unlikely to have an impact on the ground and will rarely reach the most vulnerable populations. Recent experience in Uzbekistan has shown that EU assistance can be misappropriated.

What is needed is additional attention to the region’s poorest and weakest states – Kyrgyzstan and Tajikistan – and the Sopot meeting acknowledged this. Development strategies would need to take the specific security concerns of each country into account. Kyrgyzstan witnessed a ‘revolution’ in April 2010 that was subsequently followed by inter-ethnic violence. The country is in need of capacity-building programmes that would strengthen governance abilities and foster inclusive public participation in its current democracy building effort. Tajikistan is troubled by a variety of security threats, of which the two main challenges lie in overspill effects from Afghanistan (narcotics and radicalism) and severe energy shortages. Here too increased capacity is crucial. As past scandals involving IMF funding to Tajikistan have shown, financial support to state institutions needs to be benchmarked to achievements in democratic reform and good governance, in particular with regard to monitoring and oversight.

Between now and 2014, the EU has allocated 51 million to Kyrgyzstan and 62 million to Tajikistan under the DCI. Funding through other thematic instruments such as the Instrument for Stability and the European Instrument for Democracy and Human Rights is limited by comparison. Meanwhile, EU member states are not well represented in both countries and bilateral programmes are mostly small, with the exception of Germany. More funding would be welcome but it has to go hand in hand with increased attention to these states. Several EU member states have indicated their concern about Central Asia, also in light of events in the Arab world. This needs to be backed up with increased presence on the ground to actually know what is happening and what is needed. Increased funding channelled through large programmes and through budget support is unlikely to be successful due to the extremely low absorption capacity in both southern Central Asian states. Besides the small and inexperienced bureaucracies, there is the risk of funds disappearing due to extensive corruption and mismanagement.

The EU Presidency’s development meeting recognised that increased attention to Kyrgyzstan and Tajikistan is as important – if not more so – than increased funding which is unlikely to be forthcoming in substantial quantities. New development strategies must be coordinated adequately with existing EU financing instruments and bilateral funding by member states as well as with other donors such as the US, the OSCE, the UN and international financial institutions. Finally, any renewed bilateral strategies should strictly condition aid to badly needed democratic reforms, notably ensuring that state institutions improve transparency, accountability and public participation, so that there is real ownership by the intended beneficiaries – the broader, increasingly vulnerable populations.