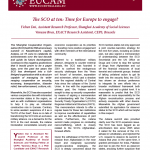 Home Research & Publications Commentaries The SCO at ten: Time for Europe to engage?
EUCAM Commentary - No. 15 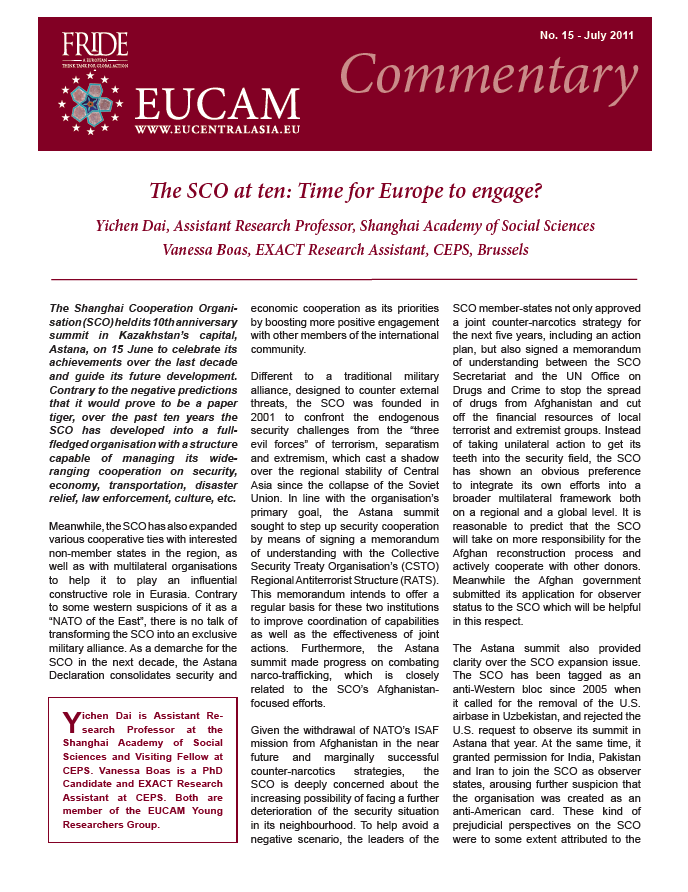 The Shanghai Cooperation Organi-sation (SCO) held its 10th anniversary summit in Kazakhstan’s capital, Astana, on 15 June to celebrate its achievements over the last decade and guide its future development. Contrary to the negative predictions that it would prove to be a paper tiger, over the past ten years the SCO has developed into a full-fledged organisation with a structure capable of managing its wide-ranging cooperation on security, economy, transportation, disaster relief, law enforcement, culture, etc.

Meanwhile, the SCO has also expanded various cooperative ties with interested non-member states in the region, as well as with multilateral organisations to help it to play an influential constructive role in Eurasia. Contrary to some western suspicions of it as a “NATO of the East”, there is no talk of transforming the SCO into an exclusive military alliance. As a demarche for the SCO in the next decade, the Astana Declaration consolidates security and economic cooperation as its priorities by boosting more positive engagement with other members of the international community.

Different to a traditional military alliance, designed to counter external threats, the SCO was founded in 2001 to confront the endogenous security challenges from the “three evil forces” of terrorism, separatism and extremism, which cast a shadow over the regional stability of Central Asia since the collapse of the Soviet Union. In line with the organisation’s primary goal, the Astana summit sought to step up security cooperation by means of signing a memorandum of understanding with the Collective Security Treaty Organisation’s (CSTO) Regional Antiterrorist Structure (RATS). This memorandum intends to offer a regular basis for these two institutions to improve coordination of capabilities as well as the effectiveness of joint actions. Furthermore, the Astana summit made progress on combating narco-trafficking, which is closely related to the SCO’s Afghanistan-focused efforts.

Given the withdrawal of NATO’s ISAF mission from Afghanistan in the near future and marginally successful counter-narcotics strategies, the SCO is deeply concerned about the increasing possibility of facing a further deterioration of the security situation in its neighbourhood. To help avoid a negative scenario, the leaders of the SCO member-states not only approved a joint counter-narcotics strategy for the next five years, including an action plan, but also signed a memorandum of understanding between the SCO Secretariat and the UN Office on Drugs and Crime to stop the spread of drugs from Afghanistan and cut off the financial resources of local terrorist and extremist groups. Instead of taking unilateral action to get its teeth into the security field, the SCO has shown an obvious preference to integrate its own efforts into a broader multilateral framework both on a regional and a global level. It is reasonable to predict that the SCO will take on more responsibility for the Afghan reconstruction process and actively cooperate with other donors. Meanwhile the Afghan government submitted its application for observer status to the SCO which will be helpful in this respect.

The Astana summit also provided clarity over the SCO expansion issue. The SCO has been tagged as an anti-Western bloc since 2005 when it called for the removal of the U.S. airbase in Uzbekistan, and rejected the U.S. request to observe its summit in Astana that year. At the same time, it granted permission for India, Pakistan and Iran to join the SCO as observer states, arousing further suspicion that the organisation was created as an anti-American card. These kind of prejudicial perspectives on the SCO were to some extent attributed to the lack of a specific and practical criterion for choosing its new members. Taking this into consideration, the SCO approved the first special regulations on the admission of new members, offering a legal basis for its expansion last year. To advance the expansion process, the Astana summit signed a new memorandum on the obligations for a candidate country on the basis of the previous regulations. According to these two documents, it is impossible for the SCO to grant full membership to Iran unless the UN suspends or lifts its sanctions related to Iranian nuclear plans. The SCO has shown its colours with this measured attitude towards its expansion. It indicates clearly that this organisation stands with the international community on the issue of non-proliferation instead of weakening the authority of the UN’s resolutions.

It has thus become increasingly apparent that this group does not seek isolation but instead is willing to foster cooperation with other multilateral organisations such as ASEAN, the CSTO, the CIS, EurAsEC and the UN. However, to date the SCO has only developed loose links with European organisations, with limited and indirect interaction chiefly taking place at EU, OSCE and NATO Central Asia and Afghanistan-themed events. None of the above has shown much zeal at the prospect of formalising their relationship with the SCO despite the fact that they often have coinciding interests and such cooperation would permit a broader Eurasian approach to tackling local concerns. The EU for example has mostly based its dialogue only on informal, ad hoc contact between SCO Secretary-Generals and the EU Special Representative for Central Asia. Critics have voiced concern that pursuing such a low-key approach risks leaving the EU on the sidelines and could result in missed opportunities to work together on areas of common concern such as drugs, water management and border security.

Beyond the motives of overlapping economic, security and energy priorities, official SCO-EU dialogue – which could rely on the ASEAN case as a blueprint – would allow Brussels to increase its visibility and boost its credibility in Central Asia. There is reason to believe that engaging with the SCO on its own terms, that is to say, respecting the Shanghai Spirit (the principle of mutual trust, mutual benefits, equal rights and respect for diversity) could serve as a confidence-building measure which would allow the EU to step out of its perceived role as a Eurocentric norm promoter. Besides, with no pressure to pay lip service to democracy, the SCO arena is likely to give a more realistic picture of the members’ intentions and expectations. After all, it is clear that dialoguing with the SCO is not tantamount to endorsing its members’ political systems; it will solely allow the EU to better grasp local priorities.

All in all, it is reasonable to believe that the SCO will strength its ability for maintaining regional and global peace, stability and prosperity with a more open and transparent approach as mentioned in the Astana Declaration. Indeed, the SCO has the potential to become a significant security actor in Central Asia in the future and to gain a greater presence globally through its influential member states, Russia and China, plus observers such as India. Attaining this status does however depend on the ability of China and Russia to bridge gaps in diverging economic and security approaches and for them to avoid head-on competition over leadership in the organisation. The SCO’s regional security role is equally currently undermined by its limited budget and weak institutions as well as inadequate experience in regional integration. Remedying these weaknesses would allow the SCO to enjoy the position of an attractive dialogue partner for European organisations in Central Asia and thus increase its own legitimacy as a Eurasian organisation. A broad Eurasian approach is advisable given the landlocked nature of Central Asia and the overlapping priorities of the organisations operating there. Dismantling stereotypes about the “NATO of the East” and focusing on cooperation would permit all involved parties to avoid a duplication of effort and to meet their objectives more effectively.