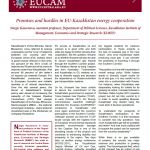 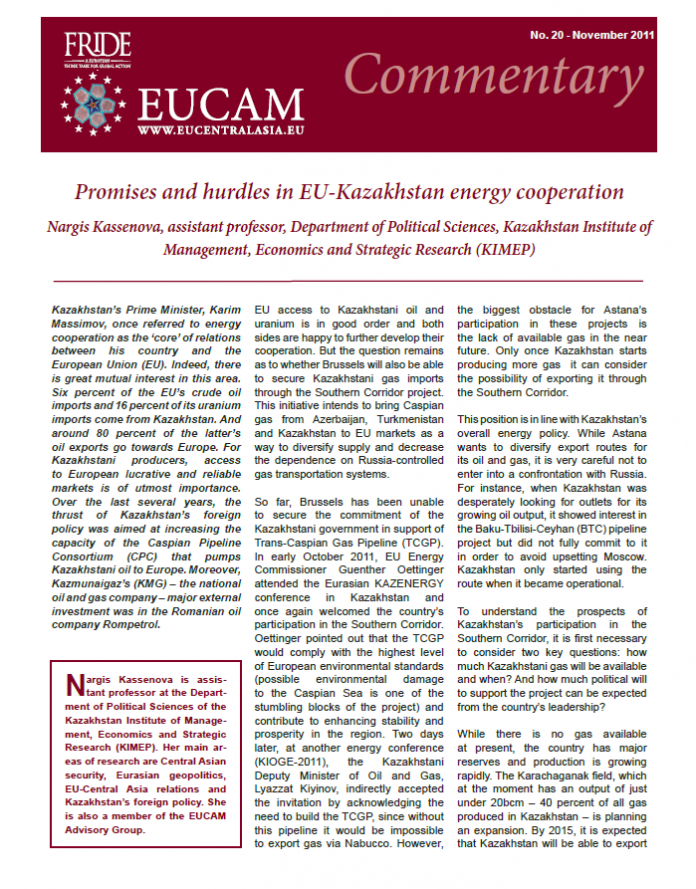 Kazakhstan’s Prime Minister, Karim Massimov, once referred to energy cooperation as the ‘core’ of relations between his country and the European Union (EU). Indeed, there is great mutual interest in this area. Six percent of the EU’s crude oil imports and 16 percent of its uranium imports come from Kazakhstan. And around 80 percent of the latter’s oil exports go towards Europe. For Kazakhstani producers, access to European lucrative and reliable markets is of utmost importance. Over the last several years, the thrust of Kazakhstan’s foreign policy was aimed at increasing the capacity of the Caspian Pipeline Consortium (CPC) that pumps Kazakhstani oil to Europe. Moreover, Kazmunaigaz’s (KMG) – the national oil and gas company – major external investment was in the Romanian oil company Rompetrol.

EU access to Kazakhstani oil and uranium is in good order and both sides are happy to further develop their cooperation. But the question remains as to whether Brussels will also be able to secure Kazakhstani gas imports through the Southern Corridor project. This initiative intends to bring Caspian gas from Azerbaijan, Turkmenistan and Kazakhstan to EU markets as a way to diversify supply and decrease the dependence on Russia-controlled gas transportation systems.
So far, Brussels has been unable to secure the commitment of the Kazakhstani government in support of Trans-Caspian Gas Pipeline (TCGP). In early October 2011, EU Energy Commissioner Guenther Oettinger attended the Eurasian KAZENERGY conference in Kazakhstan and once again welcomed the country’s participation in the Southern Corridor. Oettinger pointed out that the TCGP would comply with the highest level of European environmental standards (possible environmental damage to the Caspian Sea is one of the stumbling blocks of the project) and contribute to enhancing stability and prosperity in the region. Two days later, at another energy conference (KIOGE-2011), the Kazakhstani Deputy Minister of Oil and Gas, Lyazzat Kiyinov, indirectly accepted the invitation by acknowledging the need to build the TCGP, since without this pipeline it would be impossible to export gas via Nabucco. However, the biggest obstacle for Astana’s participation in these projects is the lack of available gas in the near future. Only once Kazakhstan starts producing more gas it can consider the possibility of exporting it through the Southern Corridor.

This position is in line with Kazakhstan’s overall energy policy. While Astana wants to diversify export routes for its oil and gas, it is very careful not to enter into a confrontation with Russia. For instance, when Kazakhstan was desperately looking for outlets for its growing oil output, it showed interest in the Baku-Tbilisi-Ceyhan (BTC) pipeline project but did not fully commit to it in order to avoid upsetting Moscow. Kazakhstan only started using the route when it became operational.

To understand the prospects of Kazakhstan’s participation in the Southern Corridor, it is frst necessary to consider two key questions: how much Kazakhstani gas will be available and when? And how much political will to support the project can be expected from the country’s leadership?

While there is no gas available at present, the country has major reserves and production is growing rapidly. The Karachaganak feld, which at the moment has an output of just under 20bcm – 40 percent of all gas produced in Kazakhstan – is planning an expansion. By 2015, it is expected that Kazakhstan will be able to export more than 30bcm of gas (this year’s exports are estimated at 9.2 bcm). Thus, provided that this becomes a reality, there will be “blue fuel” available for the TCGP.

The question of political will is more complex and layered. If Kazakhstan wants to preserve what is left of its sovereignty after the launch of the Customs Union and Single Economic Space with Russia and Belarus, the country should continue its multi-vector foreign policy and strengthen ties with Europe. In his annual address earlier this year, President Nazarbayev spoke about the signing of an EU-Kazakhstan energy charter. The details of what it will consist of are unclear, as Astana has already entered a number of energy cooperation agreements with the EU and has joined the European Energy Charter. Nonetheless, the initiative may indicate a growing European-oriented Kazakhstani foreign policy and could increase the chances of Kazakhstan joining the Southern Corridor.

Alternatively, the leadership could decide that there is more political expediency in further integration with Russia in the oil and gas sector (the level of integration in the uranium production sector is already high). In June 2011, the head of the KAZENERGY association of oil and gas companies and son-in-law of the President, Timur Kulibayev, joined the board of directors of Russia’s Gazprom. The fact that Moscow decided to invite Kulibayev to its key company could indicate the possibility of an important merger between the two national energy sectors. While important decisions on the direction of Kazakhstan’s energy policy are still pending, this move does not augur well for Europe.

Two trends are already affecting EU Kazakhstan energy relations: resource nationalism and growing social tensions in oil-producing areas. Over the last few years, the Kazakhstani government has been using an array of methods (accusations of overstating costs and tax and ecological laws violations) to put pressure on foreign oil companies working in major felds to cede a share in the projects. In the Kashagan project, the government managed to acquire 16.8 percent. In the case of Karachaganak, negotiations are still ongoing, but it is agreed that the consortium between ENI, British Gas and Lukoil will cede 10 percent to the Kazakhstani KMG. While this creates a certain level of discomfort for European companies, they have grown accustomed to these practices (Russia had applied the same tactics) and proft margins are expected to remain worthwhile in any case.

On the other hand, growing social tensions can potentially create more problems. Since May 2011, over one thousand oil workers have been on strike in Western Kazakhstan, demanding better pay and job security. This has resulted in not only a decrease in production and exports, but has also created tensions between the Kazakhstani government and the European Parliament. In mid-July, MEP Paul Murthy visited the strikers and the European Parliament sent a letter to President Nazarbayev urging him to fnd a peaceful solution to the dispute. The Kazakhstani Ministry of Foreign Affairs offcially criticised the visit and accused Paul Murthy of “interference into Kazakhstan’s internal affairs”. While strikes in themselves are not extraordinary, the inability of the government to fnd a solution after several months and the lack of institutional mechanisms might lead to further turbulences. This can affect the security of supply and complicate the life of European policy makers, torn between their interest in receiving Kazakhstani resources and that of promoting democratic reform and human rights.

These hurdles, however, cannot stop the overall development of EU Kazakhstan energy cooperation. The mutual interest is solid and strong. European investments, technologies and markets remain indispensable for Kazakhstan, and the country’s oil, gas and uranium reserves are highly attractive for Europeans. As for Kazakhstan’s participation in the Southern Corridor, it will only be possible if the TCGP becomes a reality. For the time being, Astana has decided to adopt a ‘wait and see’ position.