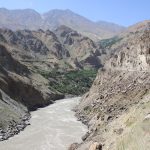 Download “How the EU links Central Asia to Afghanistan’s development”

In 2019, the European Union (EU) released a new strategy for Central Asia. Whereas the strategy is focused on the five Central Asian ‘stans’, it does seek to include Afghanistan in several areas. The EU can exploit its deepened relations with Central Asia by including Afghanistan in some of its Central Asia-focused projects and programmes, and by supporting initiatives between Central Asian countries and Afghanistan. Beyond addressing security concerns, there seems to be a new potential to develop ‘tri-lateral’ cooperation in areas like cross-border trade, education, and civil society.

When NATO’s ISAF mission was concluded between 2012 and 2014, the relationship between Afghanistan and Central Asia became a hot topic on the EU’s agenda. The main concerns revolved around NATO’s troop withdrawal, which largely took place through Central Asian countries. There were continued warnings from Central Asian leaders about negative spill-overs from Afghanistan into Tajikistan, Turkmenistan, and Uzbekistan that could destabilise the broader region. Central Asian states also feared that with the departure of NATO, the United States (US) and EU interests and support to their countries would fade. Clearly, the 2007 EU strategy for Central Asia was not equipped to address a streamlining of the EU’s policies towards Afghanistan and Central Asia, regardless of the fact that both policies are largely driven by development cooperation objectives.

During the withdrawal of NATO, the EU started looking at ways in which Afghanistan could be linked to its Central Asia policy. Afghanistan was invited to attend gatherings of the new High-level Political and Security Dialogue from 2013 onwards. Back then, EU member states had security concerns over Afghanistan’s stability, while Central Asian states sought recognition by the West and attention for their own security agendas. Today, Central Asian states see Afghanistan increasingly as a viable neighbour and regard the EU as a partner that can help build cooperation with this neighbour. In that sense, the cooperation potential goes beyond security. Issues such as water management and connectivity have become important when it comes to including Afghanistan in EU-Central Asia policies.

Cooperation between Afghanistan and Central Asia is becoming more versatile with each Central Asian state developing its own Afghanistan agenda. Already in 2010, Kazakhstan launched an education programme to provide Afghani students with scholarships to study at Kazakh universities. Kyrgyzstan and Tajikistan are part of the CASA-1000 energy project funded by the World Bank, which includes Afghanistan. Turkmenistan cooperates with Afghanistan along with Pakistan and India within the framework of the TAPI gas pipeline project supported by the Asian Development Bank. Meanwhile, Uzbekistan invests in railroad connections with and in Afghanistan, while showing interest in becoming a mediator between the Afghan government and the Taliban.

In 2018, Uzbekistan hosted an international conference on Afghanistan. Also in 2018, Kazakhstan co-chaired the UN Security Council. Both countries used these platforms to express the need for all Central Asian states to build effective security and economic partnership with Afghanistan. They stressed that Afghanistan should not be perceived as an origin of threats, but that instead opportunities for cooperation should be sought to benefit the development of the broader region.

In the new strategy, the EU argues that: ‘Stronger cooperation between Central Asia and Afghanistan has set new parameters for the EU’s own efforts to promote peace in the country. And the new ambition expressed by some Central Asian states to play a more active role in global and regional affairs is increasing the potential for cooperation with the EU on common objectives.’ There are many avenues that the EU and Central Asia could take, provided there is joint interest and Afghanistan is on board. However, there are four areas that might prove particularly interesting for the EU to further develop or adopt as a new area of cooperation.

First, political exchanges between the partners should set a clear agenda for cooperation. One key vehicle for this is the annual High-level Political and Security Dialogue between the EU and Central Asian countries, where Afghanistan is normally invited as a ‘special guest’. The meetings would ideally set a working agenda that would lead to new ‘tri-lateral’ cooperation via projects. But they should also evaluate progress made in terms of cooperation. Furthermore, Afghanistan should also be invited to other gatherings – provided that it is interested in participating – such as ad hoc senior officials’ meetings. This would offer the opportunity to go beyond security to also develop cooperation on matters such as economic development.

Second, EU border management support to Afghanistan and Central Asia via the Border Management Programme in Central Asia (BOMCA) and the EU Border Management of Northern Afghanistan (BOMNAF) programme is foreseen to be integrated. Both programmes have resembling objectives related to border security and use similar tools for institutional capacity building. It would be especially beneficial if EU support to integrated border management went beyond stopping people at borders (something that Central Asian states are already fairly good at and for which a variety of international support is available) to ensure easier access for tourists and business representatives. Ideally, the focus should be on cross-border trade facilitation, with the involvement of local authorities and civil society working on economic development and trade.

Third, Central Asian civil society plays an important role in the implementation of the EU’s Central Asia strategy. Here, it would be worth investigating options for ‘tri-lateral’ cooperation. For instance, the newly initiated EU-Central Asia Forum (the first one was held in Bishkek in July 2019), aimed at civil society and which includes the academic and think tank community, could also include Afghanistan in the near future. This could also apply to EU plans to establish a similar forum on business cooperation. Through instruments such as the European Instrument for Democracy and Human Rights, the EU could also consider supporting cross-border civil society driven projects that bring Afghanistan and Central Asian countries together.

Fourth, cooperation on education would help to cement long-term cooperation between Central Asia and Afghanistan. Central Asia already offers interesting opportunities for Afghan students. Costs for Afghan students attending Central Asian universities are lower, and it is easier to move to Central Asia to study than to Europe. A recently launched ‘tri-lateral’ programme for Afghan women to pursue technical degrees in agriculture, applied statistics and mining at Kazakh and Uzbek universities with EU funding is an excellent example. Another good initiative that has been active for many years is the OSCE Academy in Bishkek, which brings together students from all over Central Asia, including Afghanistan.

Including Afghanistan into elements of the EU strategy for Central Asia could bring benefits for the EU, Afghanistan and Central Asia alike. Of course, it remains to be seen to what extent is the EU willing and able to support ‘tri-lateral’ projects, as well as Afghanistan’s interest in such ventures. Concentrating on cross-border trade; developing a civil society angle to ‘tri-lateral’ cooperation; and establishing more Central Asian-run education projects aimed at Afghani pupils seem like good places to deepen cooperation. With the new EU strategy for Central Asia in hand, it will be important to make use of the current momentum regarding European attention to the region and Central Asian openness to regional cooperation to make headway with these ambitions.

Download “How the EU links Central Asia to Afghanistan’s development”