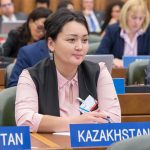 Women’s empowerment and gender equality feature prominently in the new European Union (EU) Strategy for Central Asia. They are referred to as cross-cutting issues, included in a wide range of areas such as human rights, private sector development, education, and job creation or preventing violent extremism. Kazakhstan has made some headway in recent years in terms of gender equality. In the presidential elections of 9 June 2019, the female candidate Dania Yespayeva from the Ak Zhol party came in third place, even though she only won 5 percent of the vote. But there is still a long road ahead, and many challenges remain, not only for Kazakhstan but also in the EU to achieve full gender equality. Cooperation between the EU and Kazakhstan on these matters should be built on continuous dialogue and focus on new concrete projects.

Since the late 1990s, Kazakhstan has been adopting gender equality policies. It was the first Central Asian country to establish a national coordination framework to promote gender equality through a National Commission on Women, Family and Demographic Policy. Several laws, strategies, and policies have been adopted, including the Law of State Guarantees of Equal Rights and Equal Opportunities of Men and Women (2009), the Gender Equality Strategy (2006-2016) or the Concept of Gender and Family Policy of Kazakhstan-2030 (2016). Kazakhstan has also progressed in terms of equal access to education. According to the 2018 World Economic Forum’s Global Gender Gap Report (GGGR), in 2013-2018 Kazakhstan had almost reached gender parity in educational enrolment. Most university students are women: 64 percent in masters’ programmes and 58 percent in PhD programmes (see OECD Gender Policy Delivery Review 2017).

But overall, severe challenges remain, particularly in terms of real implementation of new legislation and understanding of gender mainstreaming. Despite ranking 60 out of 149 countries in the 2018 GGGR, Kazakhstan fell 28 places compared to 2013. Whereas Kazakhstan has put gender equality on the political agenda, this has not yet translated into improvements in terms of equal pay for equal work or women’s access to male-dominated sectors like security. Work/family balance is also a challenge; most women are unable to advance in their careers once they form a family, leading to a lack of female leaders in both the public and private sectors. According to the Kazakh Agency for Civil Service Affairs, 9.3 percent of civil servants are women, but they only represent 4.1 percent of senior executive positions.

Kazakhstan (and other Central Asian partners) could learn from European countries’ experience to bring new impetus to gender equality. Sweden, for instance, has a Special Minister for Gender Equality and a Gender Equality Coordinator, and the government has launched a development programme to strengthen gender mainstreaming in 59 government agencies. Belgium, France, Italy, Portugal and Spain all have a quota for parliamentary elections. Germany, Denmark and Norway have a quota for corporate boardrooms.

At the EU level, the European Commission pays close attention to advancing gender equality in decision-making, work/family balance, preventing gender-based violence and promoting women’s rights worldwide. The EU’s 2016-2019 Strategic Engagement for Gender Equality focuses on sharing best practices among member states, raising awareness and funding projects. The EU also actively works with civil society to advance women’s rights. One notable example of cooperation includes a campaign launched by the European Women’s Lobby (EWL) in 2019 around the European Parliament elections called ‘50/50: Women for Europe, Europe for Women’, which aimed at achieving equal representation of women and men in EU institutions. Meanwhile, two of the four key positions in the new EU leadership will be occupied by women.

But not all that glitters is gold. Progress on gender equality is also slow in the EU in a number of areas. The European Commission’s 2018 Report on Equality between Women and Men in the EU shows that women are still under-represented in decision-making positions in both politics and business. In 2018, only 18.4 per cent of the leaders of the main political parties within the EU were women and only one in three deputy leaders was female. Women hold only 6.3 per cent of public company board seats in the EU. Women still tend to earn on average 16 per cent less than men.

Despite its shortcomings, the EU can help Kazakhstan. The EU-Kazakhstan Enhanced Partnership and Cooperation Agreement (EPCA) intends to strengthen cooperation in 29 key policy areas, including gender equality. Meanwhile, the new regional EU-Central Asia strategy also stresses gender equality and women’s empowerment as fields of cooperation. There are several ways in which the EU and Kazakhstan could cooperate to advance on gender equality:

First, the EU and Kazakhstan should take full advantage of existing institutional mechanisms to debate, exchange experiences and best practices, and, where possible, set concrete benchmarks. Women’s rights and countering domestic violence could be addressed at the annual EU-Kazakhstan Human Rights Dialogues. Women’s role in security and preventing violent extremism could be a returning discussion subject in the High-Level Political and Security Dialogues. In broader terms, gender equality and women’s empowerment could be discussed in the proposed ‘Senior Officials’ Meetings’ (either bilaterally or regionally). Similarly, the new ‘EU-Central Asia Forum’ with civil society, experts, and officials could include a gender working group or dimension.

Second, the EU and Kazakhstan could use cooperation on higher and vocational education to strengthen the role of women in society. In the new EU strategy, ‘quality education, employability and decent job opportunities for the young population and women’ are regarded as important for the region’s competitiveness and social cohesion. The EU could help Kazakhstan’s current efforts to foster women’s empowerment and gender equality, including improving women’s employability, through joint EU-Kazakhstan training and exchange programmes for educational professionals and civil servants responsible for coordinating, monitoring and promoting gender mainstreaming across various educational and governmental bodies. Such a project could for instance be promoted through the EU’s Central Asia Education Platform (CAEP).

Third, Kazakhstan should not only be a recipient of EU support, but also a partner in regional cooperation. Women could play an important role in stabilisation and development efforts. During its 2017-18 tenure as a non-permanent member of the United Nations Security Council, Kazakhstan attached great importance to Afghanistan, which poses numerous security challenges to the Central Asian region. In 2018, Kazakhstan, Uzbekistan, and the EU launched an education and training programme to train and educate Afghan women in both Central Asian countries. More of these programmes should be developed as a means to further promote women’s empowerment as well as achieve EU-Central Asia regional cooperation objectives.

The new EU Strategy for Central Asia signals the EU’s interest in the region as it introduces several new topics of cooperation. Gender equality and women’s empowerment is one of these new avenues of cooperation that could bring Central Asians and Europeans together around shared objectives.