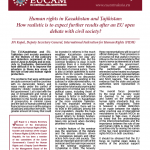 Home Research & Publications Commentaries Human Rights in Kazakhstan and Tajikistan: How realistic is to expect further...
EUCAM Commentary - No. 4 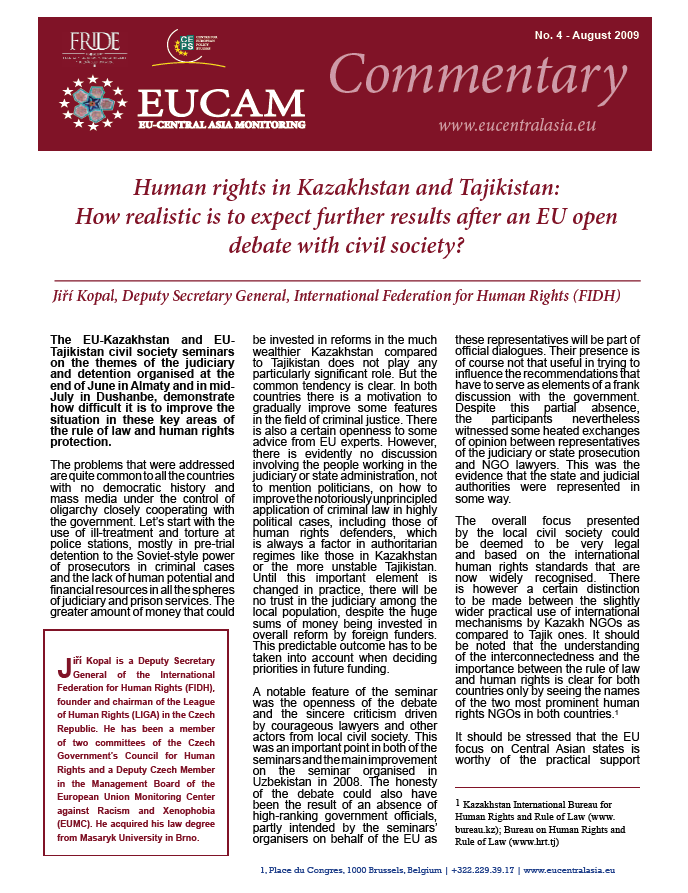 Download “Human Rights in Kazakhstan and Tajikistan: How realistic is to expect further results after an EU open debate with civil society?”

The EU-Kazakhstan and EUTajikistan civil society seminars on the themes of the judiciary and detention organised at the end of June in Almaty and in mid- July in Dushanbe, demonstrate how difficult it is to improve the situation in these key areas of the rule of law and human rights protection.

The problems that were addressed are quite common to all the countries with no democratic history and mass media under the control of oligarchy closely cooperating with the government. Let’s start with the use of ill-treatment and torture at police stations, mostly in pre-trial detention to the Soviet-style power of prosecutors in criminal cases and the lack of human potential and financial resources in all the spheres of judiciary and prison services. The greater amount of money that could be invested in reforms in the much wealthier Kazakhstan compared to Tajikistan does not play any particularly significant role. But the common tendency is clear. In both countries there is a motivation to gradually improve some features in the field of criminal justice. There is also a certain openness to some advice from EU experts. However, there is evidently no discussion involving the people working in the judiciary or state administration, not to mention politicians, on how to improve the notoriously unprincipled application of criminal law in highly political cases, including those of human rights defenders, which is always a factor in authoritarian regimes like those in Kazakhstan or the more unstable Tajikistan. Until this important element is changed in practice, there will be no trust in the judiciary among the local population, despite the huge sums of money being invested in overall reform by foreign funders. This predictable outcome has to be taken into account when deciding priorities in future funding.

A notable feature of the seminar was the openness of the debate and the sincere criticism driven by courageous lawyers and other actors from local civil society. This was an important point in both of the seminars and the main improvement on the seminar organised in Uzbekistan in 2008. The honesty of the debate could also have been the result of an absence of high-ranking government officials, partly intended by the seminars’ organisers on behalf of the EU as these representatives will be part of official dialogues. Their presence is of course not that useful in trying to influence the recommendations that have to serve as elements of a frank discussion with the government. Despite this partial absence, the participants nevertheless witnessed some heated exchanges of opinion between representatives of the judiciary or state prosecution and NGO lawyers. This was the evidence that the state and judicial authorities were represented in some way.

The overall focus presented by the local civil society could be deemed to be very legal and based on the international human rights standards that are now widely recognised. There is however a certain distinction to be made between the slightly wider practical use of international mechanisms by Kazakh NGOs as compared to Tajik ones. It should be noted that the understanding of the interconnectedness and the importance between the rule of law and human rights is clear for both countries only by seeing the names of the two most prominent human rights NGOs in both countries.(1)

It should be stressed that the EU focus on Central Asian states is worthy of the practical support of international human rights NGOs. Simply criticising human rights problems all the time and commiserating the victims is simply not enough. In the case of Tajikistan, the government is not able to secure even the most basic needs for its population such as a permanent supply of electricity in winter etc. so the population does not expect much from such a government. This is, however, evidence of the need for greater involvement by international experts; otherwise all attempts to improve the rule of law will be undermined, simply by the enormous lack of human capacity and resources.

As both seminars were firsts of their kind, the pages of recommendations on how to continue with the rule of law reforms should be welcomed. Although perhaps a little too long, they nevertheless provided the space for the creative suggestions of principal civil society leaders and further work with them for EU representatives. These should be put on the table over and over again in the official dialogues that have to take place in the coming years. What is more necessary is prioritisation within them in order to achieve realistic shifts and results, given the political situation in each particular country. Similarly, as UN human rights bodies do, EU representatives should raise the priority issues patiently and follow their implementation regularly.

It is quite sure that it will not be enough to simply finance various projects and be sceptical about their results from the very start. If Central Asian governments become too accustomed to being given money for reforms that won’t be implemented, except in the form of Potemkin villages, the EU will lose credibility as an actor that is able to achieve strategic goals by providing money and expertise.