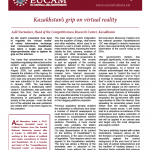 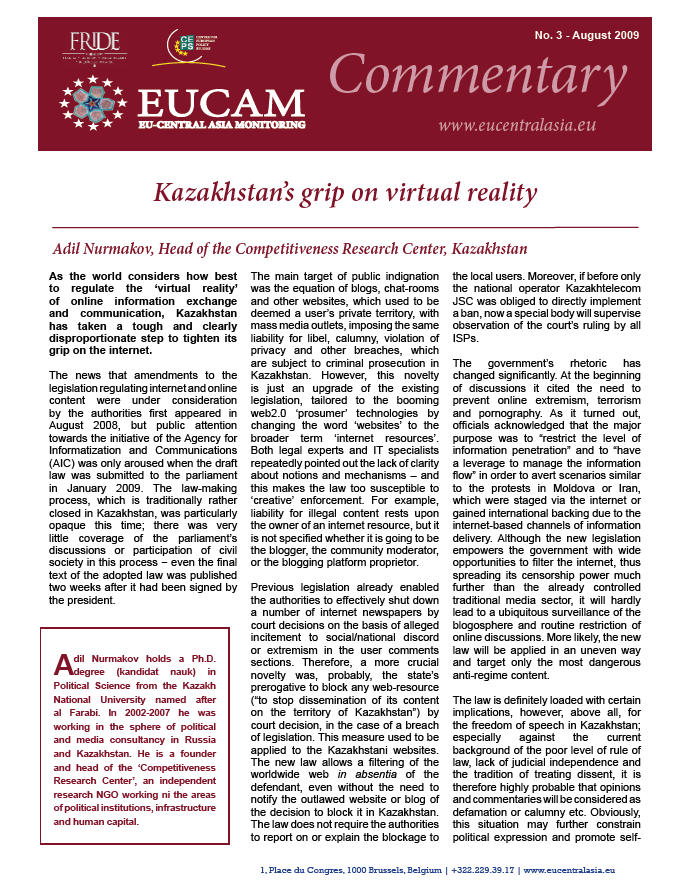 As the world considers how best to regulate the ‘virtual reality’ of online information exchange and communication, Kazakhstan has taken a tough and clearly disproportionate step to tighten its grip on the internet.

The news that amendments to the legislation regulating internet and online content were under consideration by the authorities first appeared in August 2008, but public attention towards the initiative of the Agency for Informatization and Communications (AIC) was only aroused when the draft law was submitted to the parliament in January 2009. The law-making process, which is traditionally rather closed in Kazakhstan, was particularly opaque this time; there was very little coverage of the parliament’s discussions or participation of civil society in this process − even the final text of the adopted law was published two weeks after it had been signed by the president.

The main target of public indignation was the equation of blogs, chat-rooms and other websites, which used to be deemed a user’s private territory, with mass media outlets, imposing the same liability for libel, calumny, violation of privacy and other breaches, which are subject to criminal prosecution in Kazakhstan. However, this novelty is just an upgrade of the existing legislation, tailored to the booming web2.0 ‘prosumer’ technologies by changing the word ‘websites’ to the broader term ‘internet resources’. Both legal experts and IT specialists repeatedly pointed out the lack of clarity about notions and mechanisms – and this makes the law too susceptible to ‘creative’ enforcement. For example, liability for illegal content rests upon the owner of an internet resource, but it is not specified whether it is going to be the blogger, the community moderator, or the blogging platform proprietor.

Previous legislation already enabled the authorities to effectively shut down a number of internet newspapers by court decisions on the basis of alleged incitement to social/national discord or extremism in the user comments sections. Therefore, a more crucial novelty was, probably, the state’s prerogative to block any web-resource (“to stop dissemination of its content on the territory of Kazakhstan”) by court decision, in the case of a breach of legislation. This measure used to be applied to the Kazakhstani websites. The new law allows a filtering of the worldwide web in absentia of the defendant, even without the need to notify the outlawed website or blog of the decision to block it in Kazakhstan. The law does not require the authorities to report on or explain the blockage to the local users. Moreover, if before only the national operator Kazakhtelecom JSC was obliged to directly implement a ban, now a special body will supervise observation of the court’s ruling by all ISPs.

The government’s rhetoric has changed significantly. At the beginning of discussions it cited the need to prevent online extremism, terrorism and pornography. As it turned out, officials acknowledged that the major purpose was to “restrict the level of information penetration” and to “have a leverage to manage the information flow” in order to avert scenarios similar to the protests in Moldova or Iran, which were staged via the internet or gained international backing due to the internet-based channels of information delivery. Although the new legislation empowers the government with wide opportunities to filter the internet, thus spreading its censorship power much further than the already controlled traditional media sector, it will hardly lead to a ubiquitous surveillance of the blogosphere and routine restriction of online discussions. More likely, the new law will be applied in an uneven way and target only the most dangerous anti-regime content.

The law is definitely loaded with certain implications, however, above all, for the freedom of speech in Kazakhstan; especially against the current background of the poor level of rule of law, lack of judicial independence and the tradition of treating dissent, it is therefore highly probable that opinions and commentaries will be considered as defamation or calumny etc. Obviously, this situation may further constrain political expression and promote self-censorship, exacerbating the climate of fear and the decline in civil motivation and awareness. Experts have repeatedly noted that the law is too rudimentary and allows the blocking of, for example, the whole blogging platform on the basis of an illegal comment in one of the blogs. Such an approach will directly hamper access to other sorts of information and (often paid) services for users that have nothing to do with the outlawed content. Serious concerns are voiced by the web businesses, access and hosting providers, which will now have an additional supervisor – newly created Service for ICT Incidents – and will also be obliged to incur extra costs due to the requirement to store all user-related data (including IP and reference addresses, identifiers and billing details) for two years. The new legislation has been criticised several times by the OSCE and by Sweden’s EU presidency, which expressed the fear that the law considerably limits the internet and media in general. The US Mission to the OSCE also urged Kazakhstan to bring the law into line with democratic standards on the freedom of expression.

Obviously, the state’s desire to control this powerful information resource is not justifiable, but it is understandable from the point of view of the political system’s instinct for survival. On the other hand, the suggested mechanism is certainly the most primitive approach to regulation, equal to the on/off censorship switch. Long before the law was submitted to the parliament, the authorities blocked the popular blogging network Livejournal.com, and only half a year later they acknowledged the fact of filtering, by a court decision, due to nationalist comments in one of the blogs, which appeared five months after the implementation of the block. Another point of concern is that implementation of the law will require substantial budgetary outlay, meaning that the taxpayers will have to pay for the rather arbitrary filtering of online content.

It could be that these legal novelties could herald early elections or major shifts in power, taking into account that the model case studies – Iran and Moldova – faced public protests in the aftermath of elections. Besides, logically, in order to ensure the fully-fledged implementation of the law, all circumvention tools (proxy servers, anonymizers, Tor etc.) should be outlawed too, thus putting Kazakhstan in the same boat as the most repressive states. The fragmented groups of legal experts, internet professionals and enthusiasts are currently trying to understand the new rules of the game and develop better approaches to putting the virtual reality into legal frameworks without the violation of free speech or hampering ICT development. This is taking place against the background of increased interest on the part of the state, the general public and international donors in the internet and the development opportunities it offers, so the EU could play a creative role in support of constructive dialogue between the players in this field.