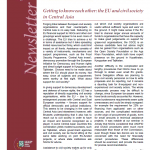 Home Research & Publications EUCAM Watch Getting to know each other: the EU and civil society in Central...
EUCAM Watch - No. 5 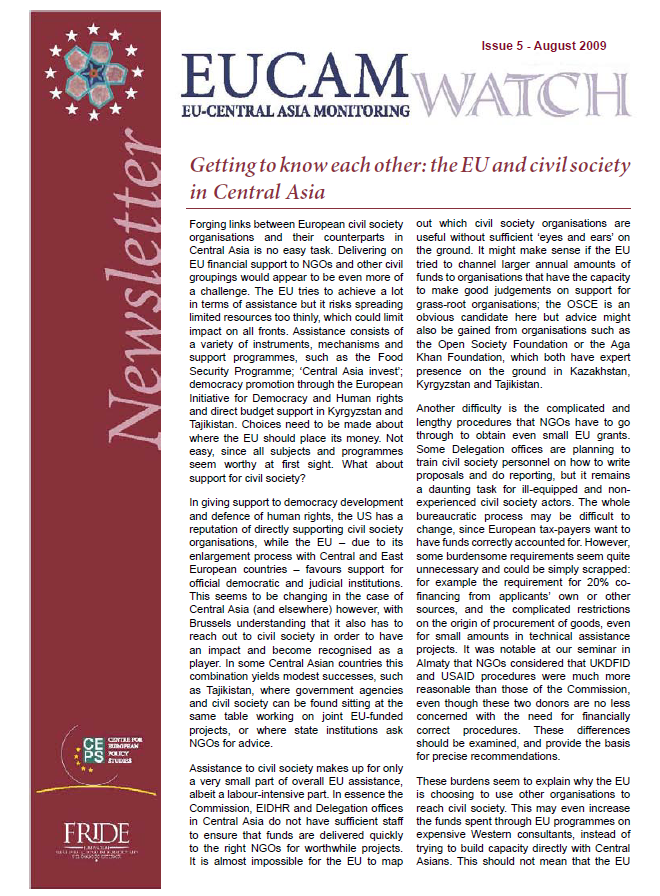 Download “Getting to know each other: the EU and civil society in Central Asia”

Forging links between European civil society organisations and their counterparts in Central Asia is no easy task. Delivering on EU fnancial support to NGOs and other civil groupings would appear to be even more of a challenge. The EU tries to achieve a lot in terms of assistance but it risks spreading limited resources too thinly, which could limit impact on all fronts. Assistance consists of a variety of instruments, mechanisms and support programmes, such as the Food Security Programme; ‘Central Asia invest’; democracy promotion through the European Initiative for Democracy and Human rights and direct budget support in Kyrgyzstan and Tajikistan. Choices need to be made about where the EU should place its money. Not easy, since all subjects and programmes seem worthy at frst sight. What about support for civil society?

In giving support to democracy development and defence of human rights, the US has a reputation of directly supporting civil society organisations, while the EU – due to its enlargement process with Central and East European countries – favours support for offcial democratic and judicial institutions. This seems to be changing in the case of Central Asia (and elsewhere) however, with Brussels understanding that it also has to reach out to civil society in order to have an impact and become recognised as a player. In some Central Asian countries this combination yields modest successes, such as Tajikistan, where government agencies and civil society can be found sitting at the same table working on joint EU-funded projects, or where state institutions ask NGOs for advice.

Assistance to civil society makes up for only a very small part of overall EU assistance, albeit a labour-intensive part. In essence the Commission, EIDHR and Delegation offces in Central Asia do not have suffcient staff to ensure that funds are delivered quickly to the right NGOs for worthwhile projects. It is almost impossible for the EU to map out which civil society organisations are useful without suffcient ‘eyes and ears’ on the ground. It might make sense if the EU tried to channel larger annual amounts of funds to organisations that have the capacity to make good judgements on support for grass-root organisations; the OSCE is an obvious candidate here but advice might also be gained from organisations such as the Open Society Foundation or the Aga Khan Foundation, which both have expert presence on the ground in Kazakhstan, Kyrgyzstan and Tajikistan.

Another diffculty is the complicated and lengthy procedures that NGOs have to go through to obtain even small EU grants. Some Delegation offces are planning to train civil society personnel on how to write proposals and do reporting, but it remains a daunting task for ill-equipped and nonexperienced civil society actors. The whole bureaucratic process may be diffcult to change, since European tax-payers want to have funds correctly accounted for. However, some burdensome requirements seem quite unnecessary and could be simply scrapped: for example the requirement for 20% cofnancing from applicants’ own or other sources, and the complicated restrictions on the origin of procurement of goods, even for small amounts in technical assistance projects. It was notable at our seminar in Almaty that NGOs considered that UKDFID and USAID procedures were much more reasonable than those of the Commission, even though these two donors are no less concerned with the need for fnancially correct procedures. These differences should be examined, and provide the basis for precise recommendations.

These burdens seem to explain why the EU is choosing to use other organisations to reach civil society. This may even increase the funds spent through EU programmes on expensive Western consultants, instead of trying to build capacity directly with Central Asians. This should not mean that the EU will lose visibility. The projects will still carry the EU logo. Finally, it is important for EU offcials from the Commission, Council, and the European Parliament to connect more regularly with civil society representatives during their visits to Central Asia.

This EUCAM Watch devotes special attention to the EU and co-operation with civil society in Central Asia. EUCAM organised a seminar on this topic in Almaty on 27 June with Central Asian NGO representatives and EUCAM experts. A report of this meeting is included here as well as that of another civil society meeting that the European Commission delegation to Kazakhstan organised a few days later, which dealt specifcally with juridical reform. Alongside the report you will fnd two commentaries: the frst by Bauke Snoep, who works as a consultant for the Dutch Centre for European Security Studies and writes about Security Sector Governance and the role the EU might play in assisting Central Asian republics to engage in meaningful defence, police and border control reform. The second is by Adil Nurmakov, who is the head of the Competitiveness Research Centre in Kazakhstan. He informs us about the amendments to the legislation regulating internet and online contents in Kazakhstan. This bulletin also updates readers on EU-Central Asia relations and the work related to the EUCAM project.