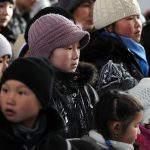 Kyrgyzstan’s capital Bishkek is growing fast. While official data indicates only a few thousand ‘visible’ migrants moving from rural areas to the capital each year, unofficial estimations point to over 50,000 people. These ‘invisible’ migrants tend to be young couples with children who move to Bishkek to seek employment opportunities. Registration at the place of residence is troublesome in Kyrgyzstan. Many migrants are not registered and are thus unable to access services such as education or healthcare. The Kyrgyz government needs to adopt a law to that effect, while international donors such as the European Union (EU) could assist with its implementation.

Registration is vital. Children of registered parents get priority in kindergartens. Teenagers can only get a passport if their parents are registered. The state-run medical care system does not recognise citizens that are not registered, and it is almost impossible to obtain disability benefits or pensions. Conversely, these citizens are also invisible to the tax services or for conscription, leading to a loss in state revenues and recruitment problems for the armed forces.

So why are internal migrants not registered at their place of actual residence? In order for a citizen to be registered at their place of residence, he/she must own a property or have a notarised permission from the owner. However, many property owners do not want to give permission, as the number of registered persons affects the cost of utility services. In addition, there is a widespread perception inherited from Soviet times that a person who is registered in an apartment could claim ownership to a part of that property. Internal migration legislation creates a vicious circle where internal migrants cannot afford to buy an apartment and landlords are not interested in helping tenants to register.

According to the National Statistical Committee, Bishkek has a population of just over one million people, while the State Registration Service has around 400,000 citizens registered and the municipal enterprise ‘Tazalyk’ just over 470,000. State Registration Service and Tazalyk numbers are used to determine the state budget assigned to Bishkek. Thus, the capital has less than half of what it needs to accommodate all its inhabitants.

The situation is getting worse for migrants and Bishkek residents alike and is also having negative consequences for service providers and companies. Registration should be simplified, for one by eliminating the property ownership requirement. In autumn 2018, MP Iskhak Pirmatov proposed new law on internal migration and registration, which included, inter alia, the introduction of the concept of ‘place of actual residence’; an online registration platform; and the issuing of passports regardless of registration. Despite the relevance and obvious benefits, the law has not yet been adopted after debate inside and outside of parliament. There are several reasons for this.

First, Bishkek’s registered citizens have a negative attitude towards changes in the status quo, especially due to incomplete or incorrect media coverage. Property owners are afraid that people might be allowed to register themselves at an address without the owner’s consent, propping up fears that tenants might have rights to claim ownership of rented property. The virtues and possible downsides of the draft law should be clearly communicated to internal migrants and registered citizens alike. One way to help address misconceptions could be an information campaign implemented by civil society organisations and possibly funded by European donors. The campaign could also enhance knowledge among journalists, local governments, law enforcement agencies, and the State Registration Service, as these institutions are unable to reach consensus.

Second, there has been a lack of political will to address the registration issue properly. One reason for this is that the political landscape might change if invisible migrants registered and became eligible to vote. Only a few migrants return to their place of registration to vote or obtain proof of a temporary stay in their actual place of residence. In practice, the current situation has stripped many Kyrgyz citizens of their political rights. The EU has already rendered substantial support to Kyrgyzstan to hold free and fair elections, and for electoral reform. The EU has also supported projects on registration. From 2014 to 2016, the EU funded a project on ‘simplified registration of citizens, protection of human rights’ which was implemented by DanChurchAid (DCA), ‘Legal Clinic “Adilet”’ and the Public Association ‘ARYSH’. These projects are important but need to be accompanied by diplomatic lip service of European diplomats to Kyrgyz policymakers on the importance of registration reform.

Third, the high cost of implementation is often cited as a reason for postponing the issue of registration of invisible migrants. In particular, parliament is concerned about the costs of creating an online platform that would be simple and safe. Here the EU could help by sharing best practices and providing technical support. For instance, the experience of Estonia in e-governance would be valuable in setting up an effective system. Should this question be properly addressed, Kyrgyzstan could even become a catalyst for registration reform in Central Asia, as its neighbors are dealing with similar rural-to-urban internal migration challenges.

Simplification of registration at the place of residence would be highly beneficial in safeguarding political and social rights in Kyrgyzstan. It would also help boost the trustworthiness of Kyrgyz democratic elections. Legislative changes in the registration of internal migrants would also contribute to the development of Bishkek, as the city’s budget could be based on accurate data. It is time the Kyrgyz legislature and executive provide visibility to ‘invisible’ people.