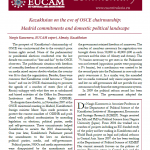 Home Research & Publications Commentaries Kazakhstan on the eve of the OSCE chairmanship: Madrid commitments and domestic...
EUCAM Commentary - No. 7 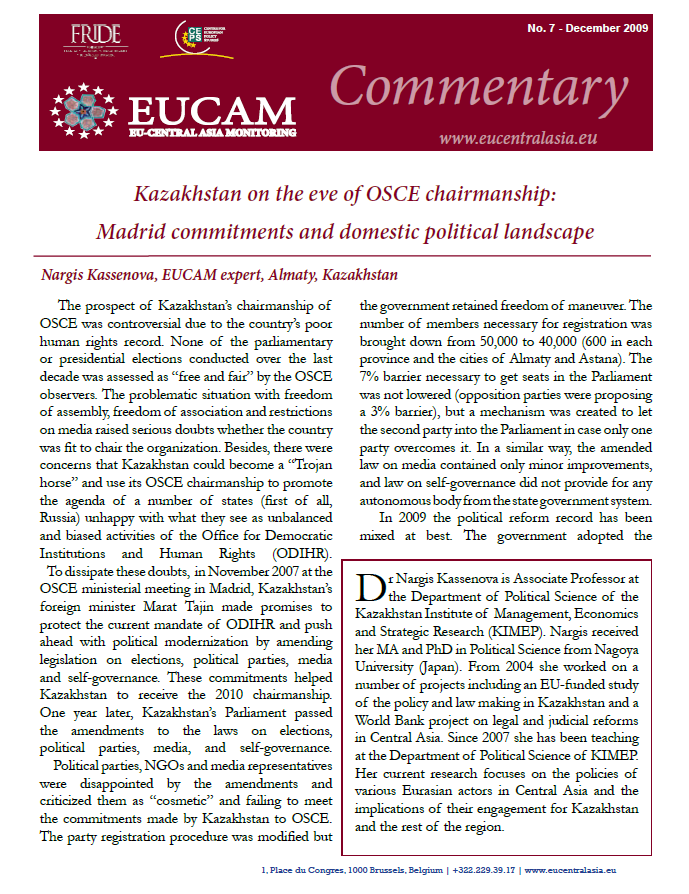 Download “Kazakhstan on the eve of the OSCE chairmanship: Madrid commitments and domestic political landscape”

The prospect of Kazakhstan’s chairmanship of OSCE was controversial due to the country’s poor human rights record. None of the parliamentary or presidential elections conducted over the last decade was assessed as “free and fair” by the OSCE observers. The problematic situation with freedom of assembly, freedom of association and restrictions on media raised serious doubts whether the country was fit to chair the organization. Besides, there were concerns that Kazakhstan could become a “Trojan horse” and use its OSCE chairmanship to promote the agenda of a number of states (first of all, Russia) unhappy with what they see as unbalanced and biased activities of the Office for Democratic Institutions and Human Rights (ODIHR).

To dissipate these doubts, in November 2007 at the OSCE ministerial meeting in Madrid, Kazakhstan’s foreign minister Marat Tajin made promises to protect the current mandate of ODIHR and push ahead with political modernization by amending legislation on elections, political parties, media and self-governance. These commitments helped Kazakhstan to receive the 2010 chairmanship. One year later, Kazakhstan’s Parliament passed the amendments to the laws on elections, political parties, media, and self-governance.

Political parties, NGOs and media representatives were disappointed by the amendments and criticized them as “cosmetic” and failing to meet the commitments made by Kazakhstan to OSCE. The party registration procedure was modified but the government retained freedom of maneuver. The number of members necessary for registration was brought down from 50,000 to 40,000 (600 in each province and the cities of Almaty and Astana). The 7% barrier necessary to get seats in the Parliament was not lowered (opposition parties were proposing a 3% barrier), but a mechanism was created to let the second party into the Parliament in case only one party overcomes it. In a similar way, the amended law on media contained only minor improvements, and law on self-governance did not provide for any autonomous body from the state government system.

In 2009 the political reform record has been mixed at best. The government adopted the National Human Rights Action Plan for 2009- 2012, developed with the help of UNDP, which gives hope for improvements in a number of key areas including freedom of assembly and freedom of association; the Legal Policy Concept for 2010- 2020 focusing on judicial reform, criminal and administrative justice, and law-enforcement bodies practices and powers; and the Path to Europe program that aims at approximating Kazakhstani technical, environmental, social welfare and political standards to European ones. The Parliament passed the laws on gender equality and on refugees (the latter had been «shelved» for many years). The same year the Government prepared and the Parliament adopted the law on information and communication networks and law on protection of privacy, criticized by journalists, human rights activists and opposition parties for limiting freedom of the Internet and traditional media (the EU made a statement expressing regret and emphasizing that it violates Kazakhstan’s OSCE commitments). Overall, independent media have been under attack. Major opposition newspapers Respublika and Taszhargan lost “defamation” cases in court and were forced to close down.

Another worrying trend in the political life of the country has been the growing personality cult. The university named after President Nazarbayev (Nazarbayev University) to open in 2010 and his bronze statue mounted in Astana broke the previous informal ban on such venerations. In September deputy chairman of the ruling Nur Otan party (Nur being a reference to Nazarbayev’s first name Nursultan) proposed adopting a law on the national leader that would make Nazarbayev life-long president.1 The initiative triggered controversy among pro-presidential forces and predictably caused strong negative reaction among the opposition.

Overall, the current political landscape in Kazakhstan cannot bring satisfaction to those who hoped that the upcoming chairmanship would stimulate political reforms. Changes were minimal and introduced minor improvements, while bigger 1 It should be noted that the 2007 constitutional amendment already allows Nazarbayev as the first president run for more than two terms. ones (like those contained in the Human Rights Action Plan) remain at the level of promises. In areas where the regime felt threatened, it did not hesitate to adopt measures that are in breach with Kazakhstan’s OSCE commitments. It is defensive with the regard to outside challenges, and there are signs that it is undergoing an internal crisis. Influential groups struggle for power, which is expressed in the ongoing “war” among law-enforcement bodies (interior ministry, financial police and security services) and arrests of a number of prominent officials and executives. As a result, the bureaucratic and business communities are demoralized. At the same time, the protest potential is growing due to the economic crisis, but the government is too inept to deal with the challenge, while the opposition parties are too weak and lacking institutionalized channels for this energy to offer viable alternatives.

Thus, on the eve of its chairmanship, Kazakhstan seems to be entering a systemic crisis. The old development paradigm does not work anymore. Internal problems have accumulated and are challenging the current status quo. How will that affect the country’s performance in OSCE? It is likely that the gap between how Kazakhstan wants to present itself and reality will be growing and more difficult to conceal. Considering also the geopolitical factor, that it will continue to be pulled in different directions by different actors (Russia, EU, US), it is reasonable to expect that the year 2010 is going to be difficult both for Kazakhstan and OSCE at large.