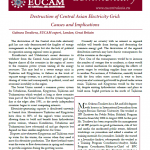 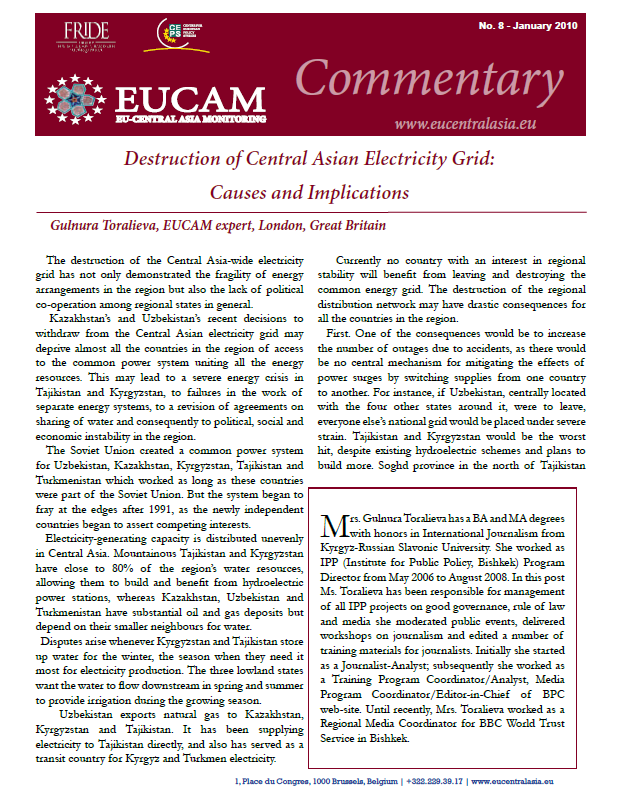 The destruction of the Central Asia-wide electricity grid has not only demonstrated the fragility of energy arrangements in the region but also the lack of political co-operation among regional states in general.

Kazakhstan’s and Uzbekistan’s recent decisions to withdraw from the Central Asian electricity grid may deprive almost all the countries in the region of access to the common power system uniting all the energy resources. This may lead to a severe energy crisis in Tajikistan and Kyrgyzstan, to failures in the work of separate energy systems, to a revision of agreements on sharing of water and consequently to political, social and economic instability in the region.

The Soviet Union created a common power system for Uzbekistan, Kazakhstan, Kyrgyzstan, Tajikistan and Turkmenistan which worked as long as these countries were part of the Soviet Union. But the system began to fray at the edges after 1991, as the newly independent countries began to assert competing interests.

Electricity-generating capacity is distributed unevenly in Central Asia. Mountainous Tajikistan and Kyrgyzstan have close to 80% of the region’s water resources, allowing them to build and benefit from hydroelectric power stations, whereas Kazakhstan, Uzbekistan and Turkmenistan have substantial oil and gas deposits but depend on their smaller neighbours for water.

Disputes arise whenever Kyrgyzstan and Tajikistan store up water for the winter, the season when they need it most for electricity production. The three lowland states want the water to flow downstream in spring and summer to provide irrigation during the growing season.

Uzbekistan exports natural gas to Kazakhstan, Kyrgyzstan and Tajikistan. It has been supplying electricity to Tajikistan directly, and also has served as a transit country for Kyrgyz and Turkmen electricity.

Currently no country with an interest in regional stability will benefit from leaving and destroying the common energy grid. The destruction of the regional distribution network may have drastic consequences for all the countries in the region.

First. One of the consequences would be to increase the number of outages due to accidents, as there would be no central mechanism for mitigating the effects of power surges by switching supplies from one country to another. For instance, if Uzbekistan, centrally located with the four other states around it, were to leave, everyone else’s national grid would be placed under severe strain. Tajikistan and Kyrgyzstan would be the worst hit, despite existing hydroelectric schemes and plans to build more. Soghd province in the north of Tajikistan depends on Uzbek electricity coming from the common energy grid. Soghd’s power plant at Kairakkum provides only 20% of the energy consumed there. If Uzbekistan leaves, two million people in Soghd region will be left without power.Central and southern Tajikistan will also lose out as they will no longer receive power generated in Turkmenistan and transferred through Uzbekistan. Kyrgyzstan, too, will suffer from the loss of electricity coming from or via Uzbekistan. However, the northern regions of the country would probably struggle through, by keeping a power station in the southern Jambyl region in Kazakhstan running continuously.

Second. The larger states will face significant problems just as smaller Tajikistan and Kyrgyzstan will. Neither Uzbekistan nor Kazakhstan are currently in a position to assure a constant, uninterrupted flow of power. Kazakhstan might leave, but it will mean additional costs, including the expense of building the infrastructure that will be required. If Uzbekistan goes, it will have supply problems at peak periods in the morning and evening. Without the Nurek power plant in Tajikistan, it will be technically problematic and costly for Uzbekistan to meet this peak consumption. The Uzbek energy grid also needs Kyrgyz power in order to regulate a constant current.

Third. Aside from periodic electricity shortages, the breakdown of regional energy arrangements will have wider implications including the problems of water sharing. For one thing, neither the Tajiks nor the Kyrgyz will have much of an incentive to honour the already loose arrangements for opening up the dam sluices in spring to let water down the Amu Darya and Syr Darya, so that their neighbours have enough to irrigate their fields. Their natural reaction will be to hold as much water back until late autumn, when they need to begin generating more power by releasing water. Within the Soviet Union, water and fuel were exchanged between republics as free, shared commodities. But in the post-1991 world, Tajikistan and Kyrgyzstan have become increasingly annoyed that their neighbours charge them for gas, oil and coal, yet their own natural resource – water – still has no monetary value placed on it. For instance, Tajikistan stores up the waters of the Syr Darya river in its Kairakkum reservoir for release to Uzbekistan and southern Kazakhstan when they need it “virtually for nothing”. It will be difficult to reach a water agreement on previous terms after the Uzbek power supply to Soghd region has been interrupted this winter.

Fourth. The disputes over water and energy which are inextricably linked with the political differences between the Central Asian states may lead to escalation of internal political and social instability in the countries of the region. There is a risk that the situation may worsen, and the most affected would be ordinary people, with shortages of power and water and limits on freedom of movement that may lead to deteriorating conditions along borders and inter-ethnic tensions. Uzbekistan’s unhappiness with the current electricity arrangements forms part of a wider pattern of disagreements with Tajikistan and Kyrgyzstan, over their plans to complete major new hydropower schemes. The Roghun and Kambarata power plants would bring Tajikistan and Kyrgyzstan, respectively, a lot closer to self-sufficiency in energy. But Uzbekistan worries that the new dams would block off water from the Amu Darya and Syr Darya, and is insisting on an international study on the possible effects of the projects before they are completed.

Russia’s role in the region is an added complicating factor. Uzbeks are concerned about talks of Moscow investing in both the Roghun and Kambarata schemes, and also about plans for a new Russian military base in southern Kyrgyzstan, not far from their border. Movement towards fully independent power networks and building separate infrastructure is becoming the only possible solution for all the regional states after the destruction of common power network and under the prevailing political conditions, although it goes against the international trend towards greater cooperation and efficiency through economies of scale.

The Central Asian states are already taking steps to forge new one-to-one arrangements with one another while strengthening their own national grids. The Kazaks, Kyrgyz, Tajiks and Uzbeks are currently working towards bilateral and trilateral deals on infrastructure and supply, bypassing the regional level at which agreement seems too difficult. The countries in the region are making great efforts to ensure energy security by making their own grids more autonomous and developing new capacity. The destruction of a common energy system only strengthened their desire for energy independence.

Despite the steps taken by the countries in the region to ensure their own energy security, the need for regional co-operation and the political will and ability to reach agreements remains the important condition for political, social and economic stability in Central Asia. More rapid conflicts on energy and water issues in the region urgently require transition of the regional energy system to market relations in line with the international practice. Energy resources, meanwhile, must stop being the tools for economic and political pressure.