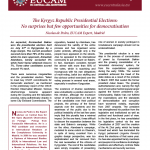 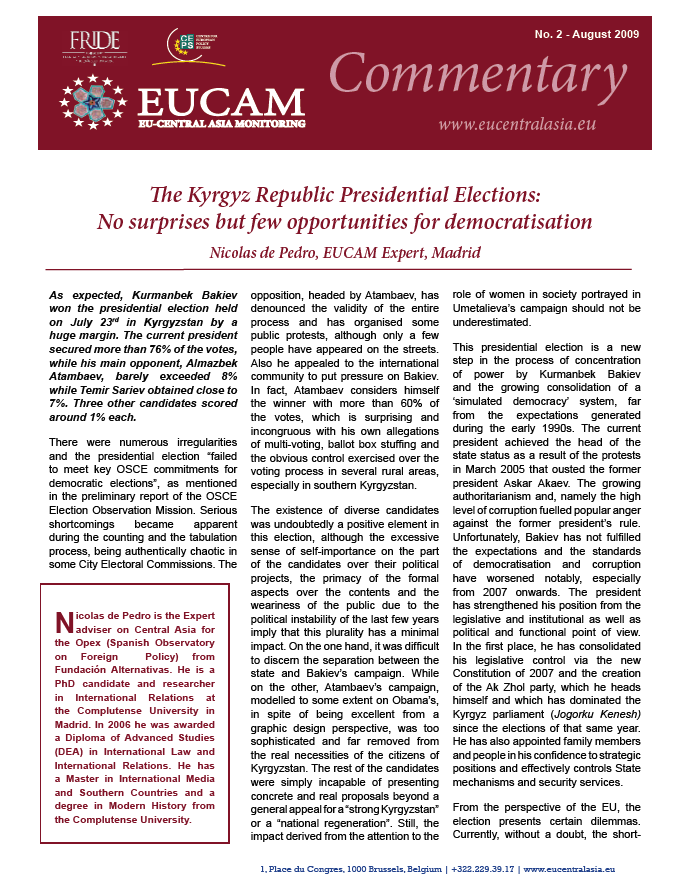 Download “The Kyrgyz Republic Presidential Elections: No surprises but few opportunities for democratisation”

As expected, Kurmanbek Bakiev won the presidential election held on July 23rd in Kyrgyzstan by a huge margin. The current president secured more than 76% of the votes, while his main opponent, Almazbek Atambaev, barely exceeded 8% while Temir Sariev obtained close to 7%. Three other candidates scored around 1% each.

There were numerous irregularities and the presidential election “failed to meet key OSCE commitments for democratic elections”, as mentioned in the preliminary report of the OSCE Election Observation Mission. Serious shortcomings became apparent during the counting and the tabulation process, being authentically chaotic in some City Electoral Commissions. The opposition, headed by Atambaev, has denounced the validity of the entire process and has organised some public protests, although only a few people have appeared on the streets. Also he appealed to the international community to put pressure on Bakiev. In fact, Atambaev considers himself the winner with more than 60% of the votes, which is surprising and incongruous with his own allegations of multi-voting, ballot box stuffing and the obvious control exercised over the voting process in several rural areas, especially in southern Kyrgyzstan.

The existence of diverse candidates was undoubtedly a positive element in this election, although the excessive sense of self-importance on the part of the candidates over their political projects, the primacy of the formal aspects over the contents and the weariness of the public due to the political instability of the last few years imply that this plurality has a minimal impact. On the one hand, it was difficult to discern the separation between the state and Bakiev’s campaign. While on the other, Atambaev’s campaign, modelled to some extent on Obama’s, in spite of being excellent from a graphic design perspective, was too sophisticated and far removed from the real necessities of the citizens of Kyrgyzstan. The rest of the candidates were simply incapable of presenting concrete and real proposals beyond a general appeal for a “strong Kyrgyzstan” or a “national regeneration”. Still, the impact derived from the attention to the role of women in society portrayed in Umetalieva’s campaign should not be underestimated.

This presidential election is a new step in the process of concentration of power by Kurmanbek Bakiev and the growing consolidation of a ‘simulated democracy’ system, far from the expectations generated during the early 1990s. The current president achieved the head of the state status as a result of the protests in March 2005 that ousted the former president Askar Akaev. The growing authoritarianism and, namely the high level of corruption fuelled popular anger against the former president’s rule. Unfortunately, Bakiev has not fulfilled the expectations and the standards of democratisation and corruption have worsened notably, especially from 2007 onwards. The president has strengthened his position from the legislative and institutional as well as political and functional point of view. In the first place, he has consolidated his legislative control via the new Constitution of 2007 and the creation of the Ak Zhol party, which he heads himself and which has dominated the Kyrgyz parliament (Jogorku Kenesh) since the elections of that same year. He has also appointed family members and people in his confidence to strategic positions and effectively controls State mechanisms and security services.

From the perspective of the EU, the election presents certain dilemmas. Currently, without a doubt, the short-term priorities for Brussels and several member states are stability and regional security. At the same time, however, to retreat from trying to establish a pluralistic and democratic system will not contribute to reaching these goals in the mid and long term. Nevertheless, the most pressing problems are not only related to the alternation of the head of the state but more so with the increasing weakness of the Kyrgyz state and the deteriorating social system. In this regard, the population seem to be deeply disillusioned with the results of the ‘democratic path’ followed by Kyrgyzstan. The irregularities committed do not seem to annoy many people nor do they regard the election as an opportunity to resolve their daily survival problems in a context of economic crisis and poverty.

In the same manner, although the consolidation of power by Bakiev could be disturbing to the EU, it would be convenient to assume that the disillusionment of the population in addition to the absence of any opposing movement capable of bringing together and heading a process of real transition, leave very few options for Brussels at this time. Therefore, it would be advisable to assume a gradual approach that permits the creation of a context where a real democratic system could take root. Education programmes and socioeconomic development seem the more tailored tools in this sense. At the same time, when dealing with the Kyrgyz government, the focus must be put on the need to develop a functioning state. Corruption and the patrimonialisation of state assets pose a serious threat to the country’s stability and the main impediment for the implantation of a true model of development in Kyrgyzstan.

Fair and free elections are an essential element of any democracic system, but the excessive emphasis on procedural issues in the electoral processes could facilitate the consolidation of simulated democracies. This has an added perverse effect as it contributes to the growing rejection of the democratic model that is associated with rampant corruption, which in turn facilitates the political apathy as well as the establishment of Islamist organisations offering a more attractive alternative model of socialisation along with an ideological framework. And it must be borne in mind that the real challenge for the country will arise with the new generation brought up in the post-Soviet system who will head the country in the next 15 to 20 years, during which time Kyrgyzstan and Central Asia will decide their place in the world of the 21st century.