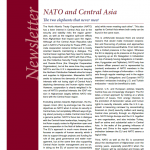 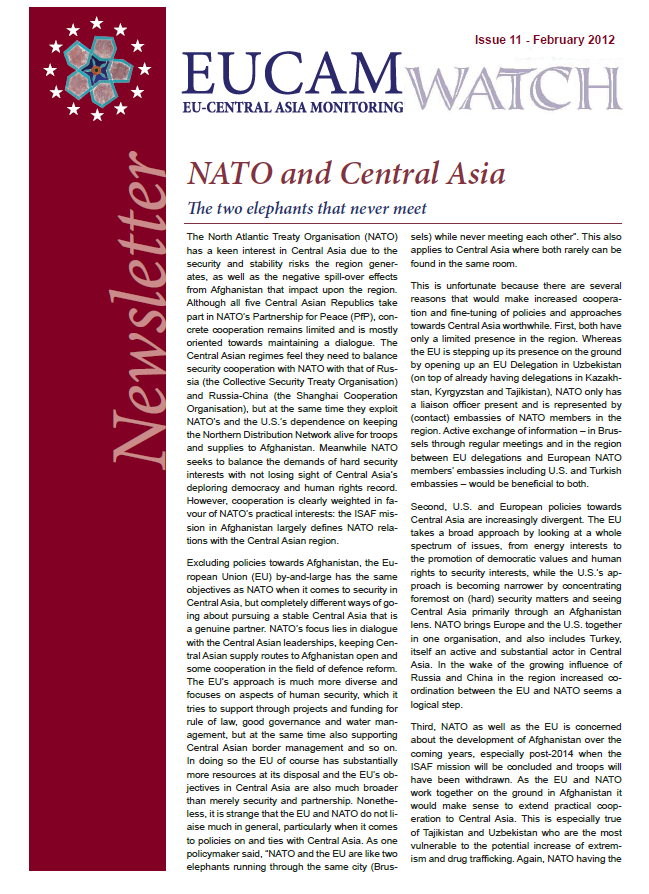 The two elephants that never meet

The North Atlantic Treaty Organisation (NATO) has a keen interest in Central Asia due to the security and stability risks the region generates, as well as the negative spill-over effects from Afghanistan that impact upon the region. Although all fve Central Asian Republics take part in NATO’s Partnership for Peace (PfP), concrete cooperation remains limited and is mostly oriented towards maintaining a dialogue. The Central Asian regimes feel they need to balance security cooperation with NATO with that of Russia (the Collective Security Treaty Organisation) and Russia-China (the Shanghai Cooperation Organisation), but at the same time they exploit NATO’s and the U.S.’s dependence on keeping the Northern Distribution Network alive for troops and supplies to Afghanistan. Meanwhile NATO seeks to balance the demands of hard security interests with not losing sight of Central Asia’s deploring democracy and human rights record. However, cooperation is clearly weighted in favour of NATO’s practical interests: the ISAF mission in Afghanistan largely defnes NATO relations with the Central Asian region.

Excluding policies towards Afghanistan, the European Union (EU) by-and-large has the same objectives as NATO when it comes to security in Central Asia, but completely different ways of going about pursuing a stable Central Asia that is a genuine partner. NATO’s focus lies in dialogue with the Central Asian leaderships, keeping Central Asian supply routes to Afghanistan open and some cooperation in the feld of defence reform. The EU’s approach is much more diverse and focuses on aspects of human security, which it tries to support through projects and funding for rule of law, good governance and water management, but at the same time also supporting Central Asian border management and so on. In doing so the EU of course has substantially more resources at its disposal and the EU’s objectives in Central Asia are also much broader than merely security and partnership. Nonetheless, it is strange that the EU and NATO do not liaise much in general, particularly when it comes to policies on and ties with Central Asia. As one policymaker said, “NATO and the EU are like two elephants running through the same city (Brussels) while never meeting each other”. This also applies to Central Asia where both rarely can be found in the same room.

This is unfortunate because there are several reasons that would make increased cooperation and fne-tuning of policies and approaches towards Central Asia worthwhile. First, both have only a limited presence in the region. Whereas the EU is stepping up its presence on the ground by opening up an EU Delegation in Uzbekistan (on top of already having delegations in Kazakhstan, Kyrgyzstan and Tajikistan), NATO only has a liaison offcer present and is represented by (contact) embassies of NATO members in the region. Active exchange of information – in Brussels through regular meetings and in the region between EU delegations and European NATO members’ embassies including U.S. and Turkish embassies – would be benefcial to both.

Second, U.S. and European policies towards Central Asia are increasingly divergent. The EU takes a broad approach by looking at a whole spectrum of issues, from energy interests to the promotion of democratic values and human rights to security interests, while the U.S.’s approach is becoming narrower by concentrating foremost on (hard) security matters and seeing Central Asia primarily through an Afghanistan lens. NATO brings Europe and the U.S. together in one organisation, and also includes Turkey, itself an active and substantial actor in Central Asia. In the wake of the growing inﬂuence of Russia and China in the region increased coordination between the EU and NATO seems a logical step.

Third, NATO as well as the EU is concerned about the development of Afghanistan over the coming years, especially post-2014 when the ISAF mission will be concluded and troops will have been withdrawn. As the EU and NATO work together on the ground in Afghanistan it would make sense to extend practical cooperation to Central Asia. This is especially true of Tajikistan and Uzbekistan who are the most vulnerable to the potential increase of extremism and drug traffcking. Again, NATO having the U.S. and Turkey on board could help the EU in planning border management assistance and other security-related support such as disaster preparedness and aspects of security sector reform and governance. Joint programming could also be envisaged in some of these areas, possibly including the OSCE and UNDP.

Lastly, the EU and NATO will also need to take a joint approach in fostering regional cooperation concerning Afghanistan. This should include not only Pakistan, but certainly Central Asia and hopefully Iran as well. Regional cooperation will be diffcult to promote in a region with so many inﬂuential players with often contradictory interests.

This is why at least NATO and the EU need to have their act together and move jointly in bringing other parties to the table. This EUCAM Watch is devoted to NATO and Central Asia. An insight into NATO’s activities in the region is provided by NATO Special Representative for the Caucasus and Central Asia, James Appathurai. Alexander Cooley writes about the Northern Distribution Network and the U.S. plans for the New Silk Road, while Marlène Laruelle and Sébastien Peyrouse discuss NATO in connection to the Russian driven CSTO and the Russia-China led SCO.