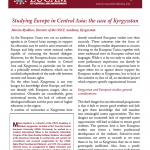 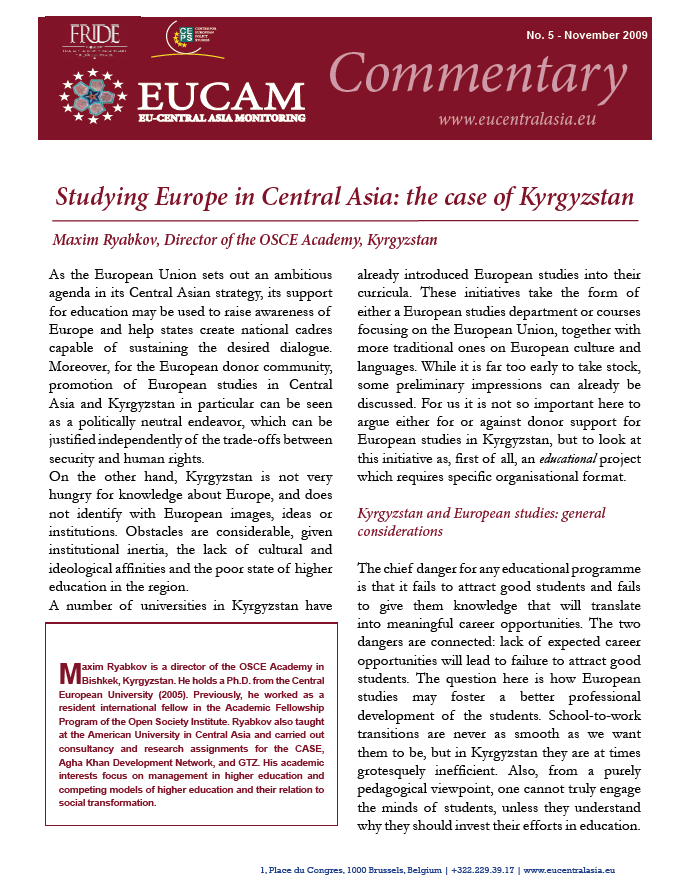 As the European Union sets out an ambitious agenda in its Central Asian strategy, its support for education may be used to raise awareness of Europe and help states create national cadres capable of sustaining the desired dialogue. Moreover, for the European donor community, promotion of European studies in Central Asia and Kyrgyzstan in particular can be seen as a politically neutral endeavor, which can be justified independently of the trade-offs between security and human rights.

On the other hand, Kyrgyzstan is not very hungry for knowledge about Europe, and does not identify with European images, ideas or institutions. Obstacles are considerable, given institutional inertia, the lack of cultural and ideological affinities and the poor state of higher education in the region.

A number of universities in Kyrgyzstan have already introduced European studies into their curricula. These initiatives take the form of either a European studies department or courses focusing on the European Union, together with more traditional ones on European culture and languages. While it is far too early to take stock, some preliminary impressions can already be discussed. For us it is not so important here to argue either for or against donor support for European studies in Kyrgyzstan, but to look at this initiative as, first of all, an educational project which requires specific organisational format.

The chief danger for any educational programme is that it fails to attract good students and fails to give them knowledge that will translate into meaningful career opportunities. The two dangers are connected: lack of expected career opportunities will lead to failure to attract good students. The question here is how European studies may foster a better professional development of the students. School-to-work transitions are never as smooth as we want them to be, but in Kyrgyzstan they are at times grotesquely inefficient. Also, from a purely pedagogical viewpoint, one cannot truly engage the minds of students, unless they understand why they should invest their efforts in education. In this regard and especially for students at the Masters degree level, career considerations are overwhelmingly important.

So let us construct an image of a Kyrgyz graduate who could use advanced knowledge of European Affairs. Central Asian graduates will not join the European civil service. They will not in all probability serve on the boards of European companies and universities. They will however work for international organizations, local universities, civic sectors and national administrations and in these capacities will interact with European partners, but will hardly have careers focused exclusively on Europe.

These factors are reinforced by a geographical distance, which translates into historical, cultural and other differences. European Studies in any of the Central Asian Republics will therefore address the development of a distant region, whose institutions, culture, sociopolitical and economic practices will in the foreseeable future continue to differ radically from the Kyrgyz realities. Teaching about Europe is teaching about a very different social reality, contact with which is first cultural and educational and only later physical and professional. As Central Asia is going to be slow in adopting European models, mere knowledge of the latter without additional specialisation will hardly be in demand. This consideration appears to be important for decisions to invest in full-fledged European studies departments.

Furthermore, the graduate employment situation in Kyrgyzstan is marked by considerable confusion. While there is an oversupply of lowquality higher education, professional career paths are not yet established, and it is simply impossible for students to predict what specific skills may be required by the market when they leave school. Lack of meritocracy culminates in an unfair and ultimately inefficient distribution of positions of responsibility. All this makes school-to-work transition rather difficult. Policy implications

These considerations lead to a few policy recommendations. First of all it seems advisable to make European studies part of a curriculum, which would simultaneously foster Central Asian expertise and knowledge of European affairs. The synergy resulting from studying different regions will enhance not only the employability of the graduate, but also students’ intellectual confidence in dealing with issues of their countries. Secondly, European studies could be made available to students of various departments, in order to cast the net wide and reach the best students, while minimising the risks of administrative malfunction. Thirdly, professional socialisation usually benefits from meaningful internships, possibly at European institutions.

As with all international development aid, there is a danger of moral hazard, when the recipient of assistance welcomes the aid without reciprocating with genuine involvement in the realisation of the plans of the donor. One way to avoid moral hazard is to aim at long-term relations between Central Asian and European educational establishments, conditional on satisfactory performance and aimed at creating local capacity in teaching European studies. Such long-term ties can also include joint research, conferences and contributions to regional dialogue.

Aside from degree programmes, short-term endeavours, including those addressing working professionals, can be a good testing ground as well as a useful exercise on their own. Aiming at raising the awareness of European institutions and policies among journalists, civil servants, NGO activists and local staff of international organisations, such short-term, non-degree courses and trainings will use a flexible format with outcomes that are far easier to measure than those of degree programmes. While the performance of a degree programme would take months and years to assess, a training will – or will not – show positive outcomes almost immediately. If participants are carefully selected based on merit, and their related professional socialisation is assured, short-term courses and training sessions can be a useful way to acquaint Central Asians with European practices in a number of areas, including institution-building, aid policies, conflict management and language policies.

Probably, none of the formats should be excluded from consideration at this point but to continue this discussion, an in-depth comprehensive study of the experience of international efforts to reform higher education in Kyrgyzstan is in order, to allow us to benefit from the considerable experience already accumulated.