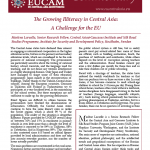 Home Research & Publications Commentaries The Growing Illiteracy in Central Asia: A Challenge for the EU
EUCAM Commentary - No. 6 Download “The Growing Illiteracy in Central Asia: A Challenge for the EU”

The Central Asian states have declared their interest in engaging in international cooperation in the higher education sector, but less so for primary and secondary education levels, which are considered to be the sole preserve of national sovereignty. The governments are particularly sensitive about the writing of national history, school curricula, and the language used for teaching, and do not desire any western interference in a highly ideological domain. Only Japan and Turkey have managed to shape some of their education programmes: Japan mainly in the reconstruction of buildings, Turkey thanks to the Turkish-Central Asian schools. Among the European countries, Germany in Tajikistan and Finland in Turkmenistan try to participate, at a very localised level, in the maintaining of the school system. But these exceptions are not sufficient to make up for the growing deficiencies.

Exact figures are difficult to obtain because the governments have blocked the dissemination of information. Officially, the Central Asian states continue to have the same literacy rates as under the Soviet regime, which is about 99 % of the population. The reality of the situation is altogether different. Figures provided by UNICEF reveal a drop of between 10% and 15% in enrolment in primary schools in over little more than a decade: the level of enrolment is reported to be 84% in Tajikistan, 88% in Uzbekistan, and in Kyrgyzstan 89%. This statistic is also contested since it is based on official figures provided by local administrations and does not take into account everyday practice, nor the number of hours actually provided.

The main problems are concentrated in the rural areas. Numerous factors prevent the primary and secondary school system from functioning: increased use of child labour, absence of transport to get to school, shortage of teachers, lack of heating during winter months, buildings that are too dangerous. Officially, the public school system is still free, but in reality parents must pay several related fees: some of these are official, such as building restoration, lunch, the purchase of textbooks and notebooks, while others depend on the level of corruption among teachers and the administration. Rural families cannot pay even a few dollars per month for these fees and so take their children out of public schooling.

Faced with a shortage of teachers, the states have reduced the weekly workloads for teachers so that they can perform two or three services a day. In rural zones, it has become common to send school-age children to school for 2-3 hours per day. During these school hours, teachers often work without a textbook, certain disciplines have disappeared owing to the lack of teachers (foreign languages, scientific subjects, etc.). Girls leaving school prematurely has become a growing phenomenon in Tajikistan, and also, but to a lesser extent, in Uzbekistan and Kyrgyzstan. For poor families, there can be no question of investing in their daughters’ education. At the higher level, technical teaching has collapsed. In Kazakhstan, Kyrgyzstan and Tajikistan, the entry rates of youths in the technical and professional establishments of higher education have halved, in Turkmenistan they have dropped to a fifth. Only Uzbekistan, in the 2000s, has managed to regain rates similar to those of the USSR.

If this situation can be partly explained by economic reasons in Kyrgyzstan and Tajikistan, in the two most authoritarian republics, Uzbekistan and Turkmenistan, increasing illiteracy must also be attributed to political will. The population pays a high cultural price for the break with the Soviet past by the change of alphabet. In all five states, the authorities have shown no great foresight in education matters for their rural population and have deliberately slashed public education spending. The private system, which is still in its infancy, enables only the upper classes to make up for these deficiencies by offering the possibility of an alternative education, either locally or abroad.

In all the Central Asian states, the medium-term consequences of the collapse of the school system have probably not yet been fully accounted for. These repercussions will weigh heavily on the future of Central Asia and will compel it to mortgage part of its future in a world in which the mastery of knowledge is one of the drivers of economic development. This situation has become especially dire, particularly considering that the Soviet regime had bequeathed an almost completely literate population, which was regarded as well-educated. There is a direct relation between the degree of female education, the possibility for women to work, issues of public health, and the rates of human development. This question is crucial since Central Asian societies are particularly young: persons under 17 years of age represent 32% of the population in Kazakhstan, and 48% in Tajikistan.