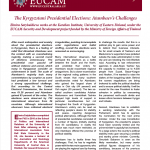 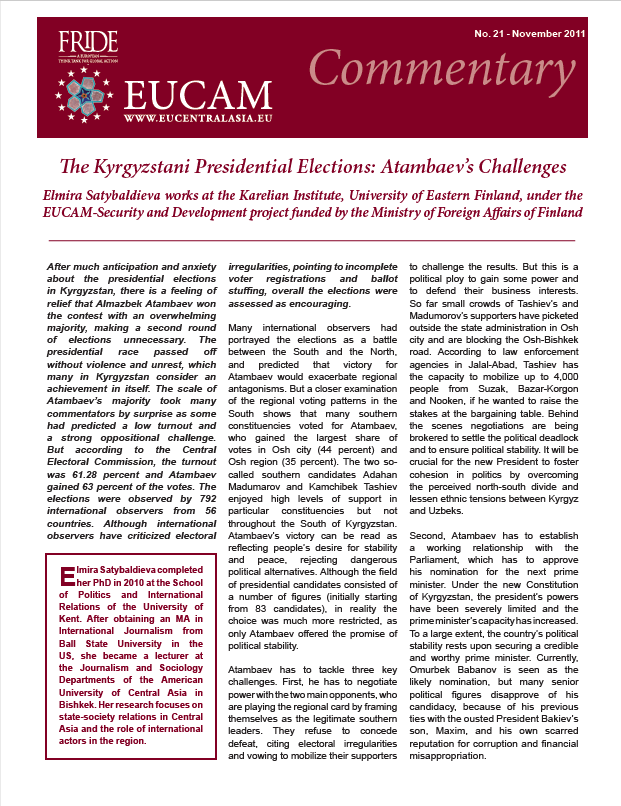 After much anticipation and anxiety about the presidential elections in Kyrgyzstan, there is a feeling of relief that Almazbek Atambaev won the contest with an overwhelming majority, making a second round of elections unnecessary. The presidential race passed off without violence and unrest, which many in Kyrgyzstan consider an achievement in itself. The scale of Atambaev’s majority took many commentators by surprise as some had predicted a low turnout and a strong oppositional challenge. But according to the Central Electoral Commission, the turnout was 61.28 percent and Atambaev gained 63 percent of the votes. The elections were observed by 792 international observers from 56 countries. Although international observers have criticized electoral irregularities, pointing to incomplete voter registrations and ballot stuffng, overall the elections were assessed as encouraging.

Many international observers had portrayed the elections as a battle between the South and the North, and predicted that victory for Atambaev would exacerbate regional antagonisms. But a closer examination of the regional voting patterns in the South shows that many southern constituencies voted for Atambaev, who gained the largest share of votes in Osh city (44 percent) and Osh region (35 percent). The two socalled southern candidates Adahan Madumarov and Kamchibek Tashiev enjoyed high levels of support in particular constituencies but not throughout the South of Kyrgyzstan. Atambaev’s victory can be read as reﬂecting people’s desire for stability and peace, rejecting dangerous political alternatives. Although the feld of presidential candidates consisted of a number of fgures (initially starting from 83 candidates), in reality the choice was much more restricted, as only Atambaev offered the promise of political stability.

Atambaev has to tackle three key challenges. First, he has to negotiate power with the two main opponents, who are playing the regional card by framing themselves as the legitimate southern leaders. They refuse to concede defeat, citing electoral irregularities and vowing to mobilize their supporters to challenge the results. But this is a political ploy to gain some power and to defend their business interests. So far small crowds of Tashiev’s and Madumorov’s supporters have picketed outside the state administration in Osh city and are blocking the Osh-Bishkek road. According to law enforcement agencies in Jalal-Abad, Tashiev has the capacity to mobilize up to 4,000 people from Suzak, Bazar-Korgon and Nooken, if he wanted to raise the stakes at the bargaining table. Behind the scenes negotiations are being brokered to settle the political deadlock and to ensure political stability. It will be crucial for the new President to foster cohesion in politics by overcoming the perceived north-south divide and lessen ethnic tensions between Kyrgyz and Uzbeks.

Second, Atambaev has to establish a working relationship with the Parliament, which has to approve his nomination for the next prime minister. Under the new Constitution of Kyrgyzstan, the president’s powers have been severely limited and the prime minister’s capacity has increased. To a large extent, the country’s political stability rests upon securing a credible and worthy prime minister. Currently, Omurbek Babanov is seen as the likely nomination, but many senior political fgures disapprove of his candidacy, because of his previous ties with the ousted President Bakiev’s son, Maxim, and his own scarred reputation for corruption and fnancial misappropriation.

Third, Atambaev’s economic challenge is to address the budget defcit of about USD 500 million. He hopes to receive a large amount of support from Russia. Moscow is due to approve a USD 107 million credit from the Anti-Crisis Fund of the Eurasian Economic Community to Kyrgyzstan. Kyrgyzstan’s economic fortunes are closely linked to Russia, where around 1 million Kyrgyzstani migrants work, and whose remittances constitute almost 50 percent of the country’s GDP. Russia’s further fnancial assistance will be conditional upon Kyrgyzstan’s entry into the Customs Union of Russia, Belarus and Kazakhstan and the closure of the US military base in Bishkek. In October, the Eurasian Economic Community agreed on Kyrgyzstan’s membership, but negotiations on the terms and conditions are still on-going. Atambaev needs to carefully balance Kyrgyzstan’s obligations to the World Trade Organization and the rules of the Customs Union. On the one hand, the Customs Union will ensure a smooth movement of goods from Kyrgyzstan to other member states, but on the other hand, it will signifcantly increase customs duties with China and will raise consumer prices. Kyrgyzstan’s retail sector is heavily dependent upon Chinese imports, which may be threatened by the Customs Union. Prior to the political crisis in 2010, KyrgyzChinese bilateral trade reached more than USD 9 billion per year. Kyrgyzstan is also anticipating the construction of a mostly Chinese-funded railroad connecting China to Uzbekistan via Kyrgyzstan, costing about USD 2 billion and improving the national economy.

Atambaev’s presidency does not signal any dramatic change in the political development of the country. While Atambaev will aim to preserve the current parliamentary system, he will exercise a signifcant inﬂuence over the Prime Minister and the new cabinet. One of Atambaev’s long term challenges is to create a stable government, which can be undermined by the current fractured parliament. Another challenge is to improve interethnic relations in southern Kyrgyzstan by reforming law enforcement agencies and improving the local economy. Ethnic Uzbeks and ethnic Kyrgyz anticipate that the new government will pay attention to the problems in the south, addressing economic and political grievances. The President, as a key foreign policy actor, will also need to carefully balance external relations with Russia, China, and other powers in the region.

It is far too early to judge whether Atambaev has the necessary abilities to successfully negotiate with internal and external actors. But one thing is clear; it will be tough, requiring political courage and diplomatic skills. Winning the presidential elections was easy in comparison to the challenges he now faces.