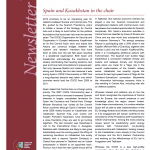 Home All Countries EU Member States Spain and Kazakhstan in the chair
EUCAM Watch - No. 7 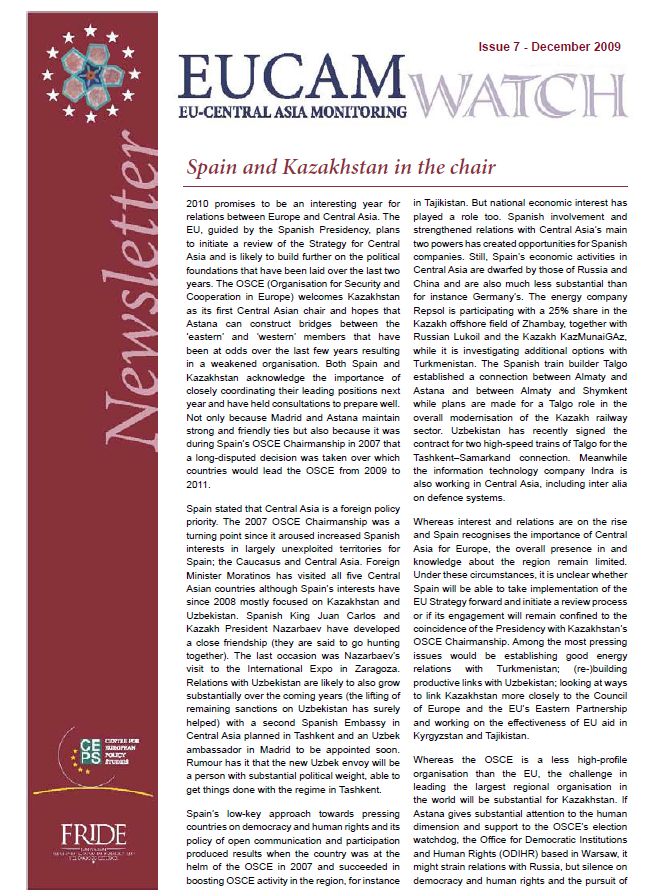 2010 promises to be an interesting year for relations between Europe and Central Asia. The EU, guided by the Spanish Presidency, plans to initiate a review of the Strategy for Central Asia and is likely to build further on the political foundations that have been laid over the last two years. The OSCE (Organisation for Security and Cooperation in Europe) welcomes Kazakhstan as its frst Central Asian chair and hopes that Astana can construct bridges between the ‘eastern’ and ‘western’ members that have been at odds over the last few years resulting in a weakened organisation. Both Spain and Kazakhstan acknowledge the importance of closely coordinating their leading positions next year and have held consultations to prepare well. Not only because Madrid and Astana maintain strong and friendly ties but also because it was during Spain’s OSCE Chairmanship in 2007 that a long-disputed decision was taken over which countries would lead the OSCE from 2009 to 2011.

Spain stated that Central Asia is a foreign policy priority. The 2007 OSCE Chairmanship was a turning point since it aroused increased Spanish interests in largely unexploited territories for Spain; the Caucasus and Central Asia. Foreign Minister Moratinos has visited all fve Central Asian countries although Spain’s interests have since 2008 mostly focused on Kazakhstan and Uzbekistan. Spanish King Juan Carlos and Kazakh President Nazarbaev have developed a close friendship (they are said to go hunting together). The last occasion was Nazarbaev’s visit to the International Expo in Zaragoza. Relations with Uzbekistan are likely to also grow substantially over the coming years (the lifting of remaining sanctions on Uzbekistan has surely helped) with a second Spanish Embassy in Central Asia planned in Tashkent and an Uzbek ambassador in Madrid to be appointed soon. Rumour has it that the new Uzbek envoy will be a person with substantial political weight, able to get things done with the regime in Tashkent.

Spain’s low-key approach towards pressing countries on democracy and human rights and its policy of open communication and participation produced results when the country was at the helm of the OSCE in 2007 and succeeded in boosting OSCE activity in the region, for instance in Tajikistan. But national economic interest has played a role too. Spanish involvement and strengthened relations with Central Asia’s main two powers has created opportunities for Spanish companies. Still, Spain’s economic activities in Central Asia are dwarfed by those of Russia and China and are also much less substantial than for instance Germany’s. The energy company Repsol is participating with a 25% share in the Kazakh offshore feld of Zhambay, together with Russian Lukoil and the Kazakh KazMunaiGAz, while it is investigating additional options with Turkmenistan. The Spanish train builder Talgo established a connection between Almaty and Astana and between Almaty and Shymkent while plans are made for a Talgo role in the overall modernisation of the Kazakh railway sector. Uzbekistan has recently signed the contract for two high-speed trains of Talgo for the Tashkent–Samarkand connection. Meanwhile the information technology company Indra is also working in Central Asia, including inter alia on defence systems.

Whereas interest and relations are on the rise and Spain recognises the importance of Central Asia for Europe, the overall presence in and knowledge about the region remain limited. Under these circumstances, it is unclear whether Spain will be able to take implementation of the EU Strategy forward and initiate a review process or if its engagement will remain confned to the coincidence of the Presidency with Kazakhstan’s OSCE Chairmanship. Among the most pressing issues would be establishing good energy relations with Turkmenistan; (re-)building productive links with Uzbekistan; looking at ways to link Kazakhstan more closely to the Council of Europe and the EU’s Eastern Partnership and working on the effectiveness of EU aid in Kyrgyzstan and Tajikistan.

Whereas the OSCE is a less high-profle organisation than the EU, the challenge in leading the largest regional organisation in the world will be substantial for Kazakhstan. If Astana gives substantial attention to the human dimension and support to the OSCE’s election watchdog, the Offce for Democratic Institutions and Human Rights (ODIHR) based in Warsaw, it might strain relations with Russia, but silence on democracy and human rights and the pursuit of further institutionalisation of the OSCE and increased consensus decision-making would anger EU countries and the US. Kazakhstan will need to add its own ﬂavour to the organisation and in that way head off likely criticism. Although these priorities have not yet been offcially confrmed, it is expected that Kazakhstan will give priority to discussions on stabilising Afghanistan and containing the proliferation of weapons (having set the good example in the early 1990s of swiftly dismantling all nuclear warheads on its territory with foreign assistance). Kazakhstan’s chairmanship is likely to lean heavy on the politico-military dimension, also incorporating border control and anti-terrorism. With regard to the human dimension, Astana’s focus is likely to be directed towards tolerance and multi-ethnic societies; issues that also ranked high on the Spanish priority list in 2007 and are less sensitive than democracy related topics.

In this issue of EUCAM Watch, expectations attached to the Spanish and Kazakh chairmanships stand central: Nicolas de Pedro conducts an interview on the Spanish Presidency with Luis Felipe Fernández de la Peña, of the Spanish Ministry of Foreign Affairs &amp; Cooperation; EUCAM expert Nargis Kassenova writes about expectations of the Kazakh OSCE Chairmanship and CEPS expert Piotr Kaczyńsky shares his views on the impact of the Lisbon Treaty on EU-Central Asian relations