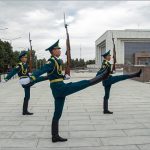 In its new strategy for Central Asia, the European Union (EU) ‘aim(s) to engage with Central Asian countries on the security sector and consider cooperation aimed at promoting its accountability and the effectiveness of its reform’. While this is a new area in the EU’s strategy, Security Sector Reform and Governance (SSRG) has been part of EU cooperation with Central Asia, mainly through its support for integrated border management and rule of law reform, particularly the promotion of transparency and accountability of the legislative and judiciary branches. While SSRG is a challenging area in the region, there are some opportunities to advance in Kyrgyzstan. What has been done so far, and how can the EU strengthen its portfolio in this area?

Since independence, Kyrgyzstan’s security sector has experienced only mild reform. Under the country’s first two presidents – Askar Akayev and Kurmanbek Bakiyev – security institutions did not undergo any significant reform and continued to suffer from bad governance and inefficiency. After the regime change in April 2010 and the subsequent establishment of a parliamentary form of government, interim president Roza Otunbayeva and her successor Almazbek Atambayev showed commitment to SSRG. Reforms were intended not only to enhance the operational capacity of the country’s security structures but also to make them more accountable, transparent and respectful of human rights. The new Constitution adopted in 2010 enhanced Parliament’s oversight of state institutions, including security agencies, and special parliamentary committees were created for that purpose.

In 2011, public councils were established to ensure civil oversight of government institutions (they were formalised by the Law on Public Councils in State Institutions adopted in 2014). Composed of civil society representatives, 36 public councils monitor state agencies’ activities, including those of the Ministry of Interior, the State Committee for Defence Affairs or the State Agency for Execution of Punishments, and make recommendations for improvement.

However, despite these nascent attempts to reform, security-sector institutions are still unable to address the population’s needs, among other reasons due to limited institutional capacity. Deep-rooted and widespread corruption, along with poor governance, also prevent genuine reform. Meanwhile, the recent arrest of former government officials by the security services under current President Sooronbay Jeenbekov do not bode well for democratic reform and rule of law, including a process of SSRG. Former Prime Minister Sapar Isakov and ex-mayor of Bishkek Kubanychbek Kulmatov are among those close to former President Almazbek Atambayev now facing criminal charges on corruption. This is nothing new; new governments in Kyrgyzstan often use state institutions to persecute political opponents and appoint loyal supporters to government positions.

Several international actors have been involved in security-sector reform in Kyrgyzstan. Most notably, the Organisation for Security and Cooperation in Europe (OSCE) has been supporting police reform since the 2010 ethnic violence incidents in southern Kyrgyzstan. The United States has also rendered some support for institutional capacity building of judicial and law-enforcement agencies. NATO is also involved, albeit modestly, in SSRG, through an integrity-building programme focused on anti-corruption and good governance in the security sector. Meanwhile, Russia, Kyrgyzstan’s main security partner, provides military presence, equipment, training, and advice, but no support for security sector governance reform.

The EU is also a supporter of SSRG. It supports Kyrgyzstan through its longstanding Border Management Programme in Central Asia (BOMCA) and the Central Asia Drug Action Programme (CADAP). BOMCA aims to enhance border security by training border guards, introducing new border management approaches and providing modern equipment. For its part, CADAP supports law-enforcement agencies in collecting and analysing evidence-based information on drugs and in addressing drug use in prisons by providing capacity-building training and technical expertise. Another EU-funded security-related project – EU Action against Drugs and Organised Crime (EU-ACT) – conducts trainings for security institutions to enhance their investigation skills in countering drug trafficking and organised crime along the heroin route.

Through a number of earlier projects, the EU also supported the penitentiary system by helping align prison reform legislation with international standards and enhancing the institutional capacity of prison personnel through capacity-building interventions and vocational trainings for inmates. The EU also contributed to increasing public understanding about the role of public councils through the 2016-18 project ‘Strengthening Civil Society Participation in Public Councils in Kyrgyzstan’. The project included numerous capacity-building trainings, workshops, and dialogue platforms with citizens and public councils’ representatives.

The new EU-Central Asia strategy offers an opportunity to build on these achievements and give new impetus to a more coherent focus on security sector reform:

First, the EU should build on its experience and the achievements of programmes like BOMCA and CADAP to further strengthen cooperation with Kyrgyzstan on issues of border security and drug-trafficking, paying close attention to the promotion of good governance principles. Along the same lines, the new strategy envisages to ‘promote adherence to and implementation of the principles and commitments of the OSCE’, as well as closer cooperation with other like-minded actors based on shared values and common objectives. The EU could maximise the efficiency of its support to security sector reform in Kyrgyzstan through coordination and joint projects with the OSCE.

Second, corruption remains a major challenge to security sector reform. The EU has shown willingness to support countries ‘wish(ing) to make necessary changes to their legislation and administrative systems and to strengthen their independent oversight institutions’. Institutions with oversight functions such as Parliament, the Ombudsman Office or the Accounts Chamber would benefit from capacity-building initiatives such as training courses, training-of-trainers, study visits and so on, to improve their capacity to monitor implementation of security sector policy and reform. Support could also be provided to draft a law on parliamentary oversight of the security sector based on international standards and input from civil society organisations (CSOs).

Third, civil society also plays an important role in SSRG. The new EU strategy highlights the role of civil society and states that ‘it will encourage dialogue and cooperation between civil society and administrations at all levels’. There is a need to increase the capacity of CSOs working on security matters to more effectively monitor government activities and spending. Here, support to the public councils as evolving oversight and advisory institutions is important. The EU could also organise technical trainings on issues such as budgeting, procurement and legislative procedures to ensure high-quality and effective recommendations.

The EU’s extensive experience in promoting good governance, rule of law and human rights can be of great added value to security sector governance in Kyrgyzstan. Even though the current political context does not seem conducive for new SSRG initiatives, Kyrgyzstan does remain a fairly open, developing democracy where new initiatives are possible. EU support to capacity-building and the promotion of SSRG principles might not bring about immediate change, but it could facilitate a more effective and democratic approach to security over time, which would highly benefit Kyrgyzstan and its people.