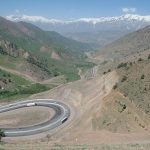 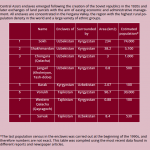 Home Research & Publications Commentaries Resilience, prosperity and cooperation in Central Asia’s enclaves: a role for the...
- No.

Bilateral relations between some Central Asian countries have improved over the past few years, among other reasons due to progress over the delimitation and demarcation of borders, opening up possibilities for regional cooperation. But many challenges remain, in particular around the region’s enclaves in the Fergana Valley, where incidents are frequent. The European Union (EU) is actively working to increase the capacity of border agencies, improve border management systems, and contribute to the fight against drug-trafficking through its BOMCA (Border Management in Central Asia) programme. These activities, combined with the EU’s experience with enclaves in its own territory, could be of value to Central Asian states.

In mid-March 2019, violence between Kyrgyz and Tajik citizens broke out on the border close to the Tajik enclave of Vorukh due to the renewal of the construction of a Kyrgyz road bypassing Vorukh. As a result of this incident, two people died and more than 20 were injured. Since then, several bilateral meetings have taken place. Even though both sides have expressed willingness to settle the issue, it is unlikely that the situation will be resolved any time soon. Problems are likely to persist until an agreement is reached on what cartographic material and sources to use to delineate the border.

The enclaves of the Fergana Valley have been stumbling blocks to improving bilateral ties within Central Asia and developing regional cooperation. They affect developments in three broad dimensions: regional connectivity and infrastructure; economic prosperity in and beyond the enclaves; and security.

First, the enclaves are constraining people-to-people interaction. During the Soviet era, infrastructure was built irrespective of borders. However, Central Asian countries are now trying to build independent infrastructure networks bypassing neighbouring territories, something that is not economically feasible and is leading to the isolation of some communities. The same applies to social infrastructure like schools and hospitals that used to be of ‘common use’ but that now are inaccessible to many due to hard borders.

Enclaves in the Fergana Valley

Second, the enclaves suffer from economic isolation. Families in the enclaves used to rely on agriculture, particularly cattle-breeding, but limited access to pastures, difficulties related to cross-border trade, and remoteness from the mainland have made agriculture less profitable. The economy of enclaves such as Shokhimardon also used to be partly based on tourism, but insecurity and complicated border-crossing procedures have made these destinations unattractive for visitors. As a result, many people have been forced to seek employment abroad, and remittances are now the primary source of income in all enclaves.

Third, border tensions often spill over into conflicts between communities. Disputes over land or the use of water from the rivers flowing across the enclaves are commonplace, sometimes causing casualties. The real number of casualties is hard to determine, as each country provides its own statistics, which are often used by governments against one another. Several enclaves are still heavily militarised.

The new EU Strategy for Central Asia does not directly address the issue of the enclaves, but it does have a series of objectives, mechanisms and programmes that, if combined in the right way, could help remedy some of the problems surrounding the enclaves. While it is unlikely that Kyrgyzstan, Tajikistan and Uzbekistan would accept that the EU act as mediator, they might be interested in concrete projects and experience-sharing. In particular, the new strategy’s three main themes of resilience, prosperity and cooperation could be combined to solve many problems in the enclaves.

By promoting open and secure borders and facilitating the resolution of border disputes, the EU could help build resilience. Central Asian countries and the enclaves are not resilient to a host of threats ranging from drug-trafficking and smuggling to violence between communities. The new EU strategy argues for intensification of ‘cooperation with the region in the fight against organised crime, migrant smuggling, trafficking in human beings and trafficking in illicit drugs’. The EU and Central Asian partners could use existing platforms like the EU-Central Asia High-level Political and Security Dialogues or foreseen ones such as the ‘ad hoc EU-Central Asia experts’ meetings on the prevention of violent extremism and counterterrorism’ to address these issues, also involving the proposed EU security and counter-terrorism expert for Central Asia. But most importantly, the EU could use the BOMCA programme to address the enclaves’ borders. To do so, it should include this matter in the programme’s tenth phase, which is expected to be launched at the end of 2019.

By promoting cross-border trade and facilitating economic growth in the Fergana enclaves, the EU could foster prosperity. The enclaves’ small size and geographic isolation inhibit them from developing industries, and their economies are fully dependent on their neighbours. The enclaves in the Fergana Valley need to develop agricultural value-chains across the settlements located in the enclaves themselves and in neighbouring countries. The restoration of tourism infrastructure is another area that could generate some income in mountainous areas like Shohimardon, Sokh, Vorukh and Sarvak. Here, the EU could actively contribute. As highlighted in the strategy: ‘the EU has particular expertise and comparative advantage such as the agriculture sector and agri-business, the environment and water, energy, transport and sustainable tourism’. Harmonisation of customs procedures and standardisation of sanitary and phytosanitary measures and quality economic infrastructure could help diffuse some grey border areas and spur trade. Programmes like Central Asia Invest and the development of business-to-business dialogues could help develop local economies, while there is also need for technical assistance (through TAIEX Technical Assistance and Information Exchange for instance) and twinning projects to help build the capacity of local administrations to implement economic reforms.

By engaging all stakeholders from the three countries, border regions and enclaves, the EU could promote regional cooperation. In addition to agreement among the three states, it is important to promote a bottom-up process, whereby local administrations establish direct contact with one another, and to foster social and cultural cooperation to promote grass-roots peace-building. Experience-sharing and research collaboration among Central Asian countries and with the EU institutions and member states is also necessary. There are several enclaves in Europe (for instance the German enclave Büsingen am Hochrhein or the Italian enclave Campione d’Italia, both in Switzerland) that have developed models that could be adapted to the local circumstances of the Fergana Valley enclaves. The EU could promote and organise study-trips for administration and community members from the Central Asian enclaves or establish ‘twin town’ relations with European enclaves. Moreover, enclaves can be used as a testing ground for further regional integration: the patchwork of thirty Belgium (Baarle-Hertog) and Dutch (Baarle-Nassau) enclaves in the south of the Netherlands was used as a European Integration Lab in the 1990s, providing a mini-model for European integration.

As Kyrgyzstan, Tajikistan and Uzbekistan show increasing willingness to cooperate with each other, the enclaves of the Fergana Valley could move from stumbling blocks to opportunities for regional integration. There is also renewed interest in working with the EU in regional initiatives. The EU could play an important role in helping Central Asian countries to find solutions for the enclaves’ security and economic problems through talks, joint projects and so on, based on its experience with border management and the successful development of European enclaves. Joint efforts by Central Asian countries and the engagement of the EU and its member states could turn the enclaves into a laboratory for increased regional cooperation.