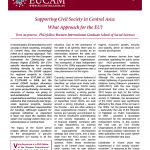 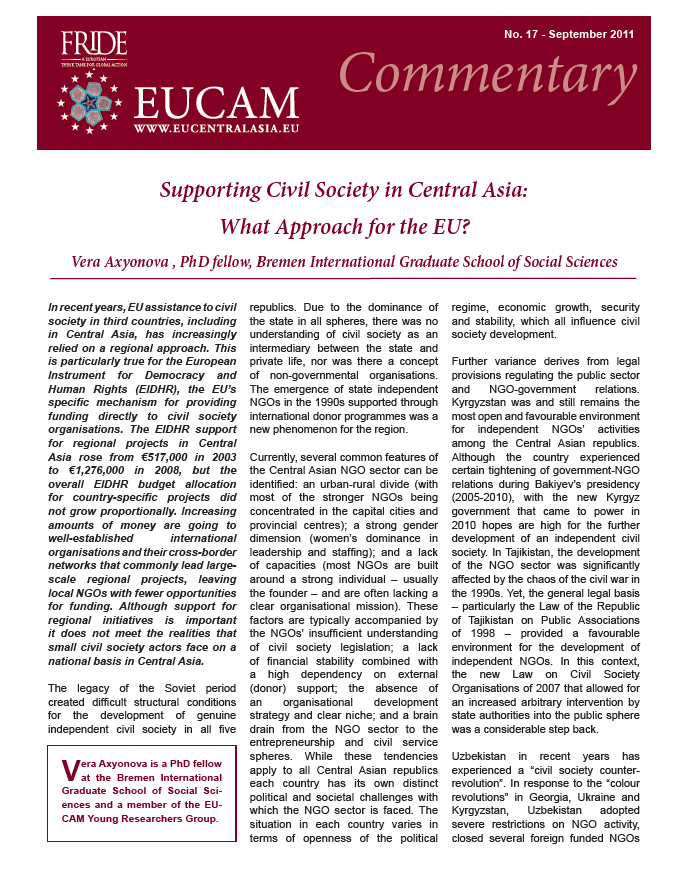 Download “Supporting Civil Society in Central Asia: What Approach for the EU?”

In recent years, EU assistance to civil society in third countries, including in Central Asia, has increasingly relied on a regional approach. This is particularly true for the European Instrument for Democracy and Human Rights (EIDHR), the EU’s specific mechanism for providing funding directly to civil society organisations. The EIDHR support for regional projects in Central Asia rose from €517,000 in 2003 to €1,276,000 in 2008, but the overall EIDHR budget allocation for country-specific projects did not grow proportionally. Increasing amounts of money are going to well-established international organisations and their cross-border networks that commonly lead large-scale regional projects, leaving local NGOs with fewer opportunities for funding. Although support for regional initiatives is important it does not meet the realities that small civil society actors face on a national basis in Central Asia.

The legacy of the Soviet period created difficult structural conditions for the development of genuine independent civil society in all five republics. Due to the dominance of the state in all spheres, there was no understanding of civil society as an intermediary between the state and private life, nor was there a concept of non-governmental organisations. The emergence of state independent NGOs in the 1990s supported through international donor programmes was a new phenomenon for the region.

Currently, several common features of the Central Asian NGO sector can be identified: an urban-rural divide (with most of the stronger NGOs being concentrated in the capital cities and provincial centres); a strong gender dimension (women’s dominance in leadership and staffing); and a lack of capacities (most NGOs are built around a strong individual – usually the founder – and are often lacking a clear organisational mission). These factors are typically accompanied by the NGOs’ insufficient understanding of civil society legislation; a lack of financial stability combined with a high dependency on external (donor) support; the absence of an organisational development strategy and clear niche; and a brain drain from the NGO sector to the entrepreneurship and civil service spheres. While these tendencies apply to all Central Asian republics each country has its own distinct political and societal challenges with which the NGO sector is faced. The situation in each country varies in terms of openness of the political regime, economic growth, security and stability, which all influence civil society development.

Further variance derives from legal provisions regulating the public sector and NGO-government relations. Kyrgyzstan was and still remains the most open and favourable environment for independent NGOs’ activities among the Central Asian republics. Although the country experienced certain tightening of government-NGO relations during Bakiyev’s presidency (2005-2010), with the new Kyrgyz government that came to power in 2010 hopes are high for the further development of an independent civil society. In Tajikistan, the development of the NGO sector was significantly affected by the chaos of the civil war in the 1990s. Yet, the general legal basis – particularly the Law of the Republic of Tajikistan on Public Associations of 1998 – provided a favourable environment for the development of independent NGOs. In this context, the new Law on Civil Society Organisations of 2007 that allowed for an increased arbitrary intervention by state authorities into the public sphere was a considerable step back.

Uzbekistan in recent years has experienced a “civil society counter-revolution”. In response to the “colour revolutions” in Georgia, Ukraine and Kyrgyzstan, Uzbekistan adopted severe restrictions on NGO activity, closed several foreign funded NGOs and established a state-sponsored “civil society”. These measures have left hardly any room for the functioning of state-independent NGOs, while the GONGOs (Government-Operated Non-Governmental Organisations) enjoy financial support from the Uzbek government and even manage to attract international funding, as the recent case of a €3.7 million grant from the European Union to an organisation headed by President Karimov’s daughter has demonstrated. Since 2003, similar processes have been observed in Turkmenistan, where NGOs supporting democracy and human rights have not been allowed to operate openly. In that sense Turkmenistan has the poorest record compared to other Central Asian countries since it lacks any independent civil society, except for activists that have fled the country and operate from abroad.

In Kazakhstan, a system of “social contracting” (government tenders) has been established as the result of reforms started in 2003. This has become a compromise between the government and parts of the civil society sector. In this set-up state funding is available for NGOs providing social services, excluding human rights organisations whose primary sources of funding are still international donors. As the international funding decreases and Kazakh authorities maintain considerable power to monitor NGO activity, the capacities of groups advocating civil rights are gradually diminished.

The distinct political developments and legal provisions in the five Central Asian republics have made it difficult for civil society organisations to establish sustainable regional platforms. International organisations often initiate partnerships and networks for the length of a joint project, which rarely cover all five Central Asian countries and are usually dissolved after the project’s completion therefore ending external funding. This illustrates the limited prospects for creating functional long-term cross-border partnerships at the current stage.

For the European Union, the above suggests that there is a clear need for enhanced long-term civil society support at the national level. Initiating regional project partnerships from outside does not seem to be the best way forward. National associations are vital for influencing policy in the NGO’s own country but external networks often do not reflect the needs and capacities of local NGOs. Moreover, most grassroots NGO’s from Central Asia are excluded from regional projects due to restrictions at home or limited capacity. A substantial part of the regional funding is meanwhile absorbed by European civil society organisations meaning the Central Asians have less opportunity to benefit from it.

Regional EIDHR assistance should however not be fully discarded as it does help to have Central Asian and European civil society meet and share experiences. The practice of regionally oriented civil society seminars in Central Asia that are financially supported by the EIDHR and connected to the official Human Rights Dialogues between the EU and Central Asian states is a good example of this. Such regional initiatives also help to create better understanding between civilians from different countries that have tensions in their neighbourly relationship.
The main focus should however be on national support for NGO’s in Central Asian states. The challenge here is to further simplify the procedures for EU funding of NGO’s through small grants. It will be work intensive for the EU to make sure that project funds are received by genuine independent organisations instead of state-run civil society but here the strengthening of Europe’s diplomatic presence in Central Asia through official delegations in Bishkek, Dushanbe and Tashkent is a positive step.