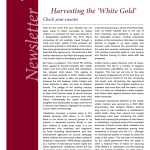 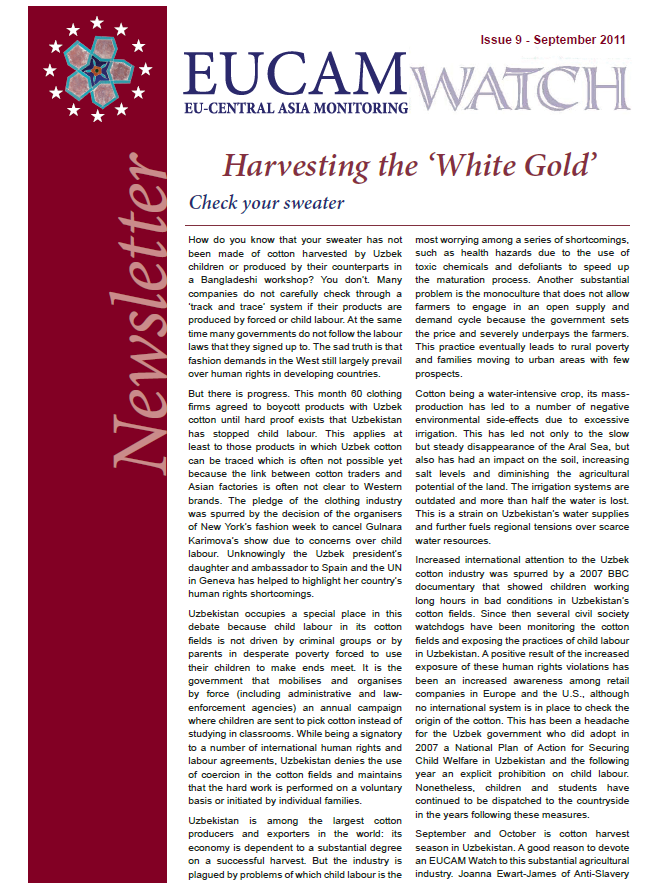 How do you know that your sweater has not been made of cotton harvested by Uzbek children or produced by their counterparts in a Bangladeshi workshop? You don’t. Many companies do not carefully check through a ‘track and trace’ system if their products are produced by forced or child labour. At the same time many governments do not follow the labour laws that they signed up to. The sad truth is that fashion demands in the West still largely prevail over human rights in developing countries.

But there is progress. This month 60 clothing frms agreed to boycott products with Uzbek cotton until hard proof exists that Uzbekistan has stopped child labour. This applies at least to those products in which Uzbek cotton can be traced which is often not possible yet because the link between cotton traders and Asian factories is often not clear to Western brands. The pledge of the clothing industry was spurred by the decision of the organisers of New York’s fashion week to cancel Gulnara Karimova’s show due to concerns over child labour. Unknowingly the Uzbek president’s daughter and ambassador to Spain and the UN in Geneva has helped to highlight her country’s human rights shortcomings.

Uzbekistan occupies a special place in this debate because child labour in its cotton felds is not driven by criminal groups or by parents in desperate poverty forced to use their children to make ends meet. It is the government that mobilises and organises by force (including administrative and lawenforcement agencies) an annual campaign where children are sent to pick cotton instead of studying in classrooms. While being a signatory to a number of international human rights and labour agreements, Uzbekistan denies the use of coercion in the cotton felds and maintains that the hard work is performed on a voluntary basis or initiated by individual families.

Uzbekistan is among the largest cotton producers and exporters in the world: its economy is dependent to a substantial degree on a successful harvest. But the industry is plagued by problems of which child labour is the most worrying among a series of shortcomings, such as health hazards due to the use of toxic chemicals and defoliants to speed up the maturation process. Another substantial problem is the monoculture that does not allow farmers to engage in an open supply and demand cycle because the government sets the price and severely underpays the farmers. This practice eventually leads to rural poverty and families moving to urban areas with few prospects.

Cotton being a water-intensive crop, its massproduction has led to a number of negative environmental side-effects due to excessive irrigation. This has led not only to the slow but steady disappearance of the Aral Sea, but also has had an impact on the soil, increasing salt levels and diminishing the agricultural potential of the land. The irrigation systems are outdated and more than half the water is lost. This is a strain on Uzbekistan’s water supplies and further fuels regional tensions over scarce water resources.

Increased international attention to the Uzbek cotton industry was spurred by a 2007 BBC documentary that showed children working long hours in bad conditions in Uzbekistan’s cotton felds. Since then several civil society watchdogs have been monitoring the cotton felds and exposing the practices of child labour in Uzbekistan. A positive result of the increased exposure of these human rights violations has been an increased awareness among retail companies in Europe and the U.S., although no international system is in place to check the origin of the cotton. This has been a headache for the Uzbek government who did adopt in 2007 a National Plan of Action for Securing Child Welfare in Uzbekistan and the following year an explicit prohibition on child labour. Nonetheless, children and students have continued to be dispatched to the countryside in the years following these measures.

September and October is cotton harvest season in Uzbekistan. A good reason to devote an EUCAM Watch to this substantial agricultural industry. Joanna Ewart-James of Anti-Slavery International and Miriam Saage-Maaß of the European Centre for Constitutional and Human Rights (ECCHR) give their view on forced child labour in Uzbekistan. EUCAM researchers Marlène Laruelle and Sébastien Peyrouse write about broader agricultural diffculties in Uzbekistan and our programme manager Tika Tsertsvadze looks into the EU Generalised System of Preferences in relation to Uzbekistan.