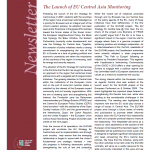 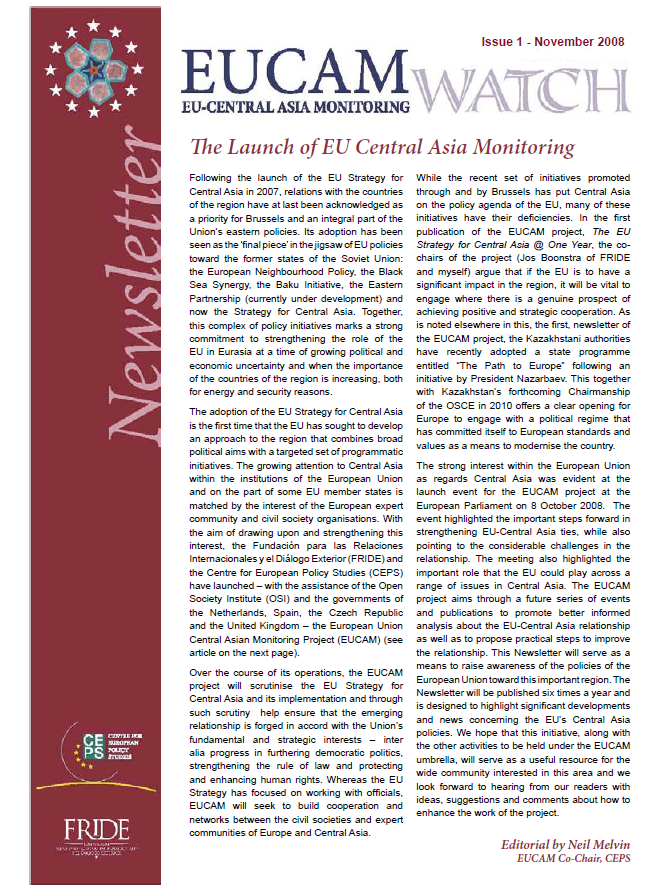 Following the launch of the EU Strategy for Central Asia in 2007, relations with the countries of the region have at last been acknowledged as a priority for Brussels and an integral part of the Union’s eastern policies. Its adoption has been seen as the ‘final piece’ in the jigsaw of EU policies toward the former states of the Soviet Union: the European Neighbourhood Policy, the Black Sea Synergy, the Baku Initiative, the Eastern Partnership (currently under development) and now the Strategy for Central Asia. Together, this complex of policy initiatives marks a strong commitment to strengthening the role of the EU in Eurasia at a time of growing political and economic uncertainty and when the importance of the countries of the region is increasing, both for energy and security reasons.

The adoption of the EU Strategy for Central Asia is the first time that the EU has sought to develop an approach to the region that combines broad political aims with a targeted set of programmatic initiatives. The growing attention to Central Asia within the institutions of the European Union and on the part of some EU member states is matched by the interest of the European expert community and civil society organisations. With the aim of drawing upon and strengthening this interest, the Fundación para las Relaciones Internacionales y el Diálogo Exterior (FRIDE) and the Centre for European Policy Studies (CEPS) have launched – with the assistance of the Open Society Institute (OSI) and the governments of the Netherlands, Spain, the Czech Republic and the United Kingdom – the European Union Central Asian Monitoring Project (EUCAM) (see article on the next page).

Over the course of its operations, the EUCAM project will scrutinise the EU Strategy for Central Asia and its implementation and through such scrutiny help ensure that the emerging relationship is forged in accord with the Union’s fundamental and strategic interests – inter alia progress in furthering democratic politics, strengthening the rule of law and protecting and enhancing human rights. Whereas the EU Strategy has focused on working with officials, EUCAM will seek to build cooperation and networks between the civil societies and expert communities of Europe and Central Asia.

While the recent set of initiatives promoted through and by Brussels has put Central Asia on the policy agenda of the EU, many of these initiatives have their deficiencies. In the first publication of the EUCAM project, The EU Strategy for Central Asia @ One Year, the cochairs of the project (Jos Boonstra of FRIDE and myself) argue that if the EU is to have a significant impact in the region, it will be vital to engage where there is a genuine prospect of achieving positive and strategic cooperation. As is noted elsewhere in this, the first, newsletter of the EUCAM project, the Kazakhstani authorities have recently adopted a state programme entitled “The Path to Europe” following an initiative by President Nazarbaev. This together with Kazakhstan’s forthcoming Chairmanship of the OSCE in 2010 offers a clear opening for Europe to engage with a political regime that has committed itself to European standards and values as a means to modernise the country.

The strong interest within the European Union as regards Central Asia was evident at the launch event for the EUCAM project at the European Parliament on 8 October 2008. The event highlighted the important steps forward in strengthening EU-Central Asia ties, while also pointing to the considerable challenges in the relationship. The meeting also highlighted the important role that the EU could play across a range of issues in Central Asia. The EUCAM project aims through a future series of events and publications to promote better informed analysis about the EU-Central Asia relationship as well as to propose practical steps to improve the relationship. This Newsletter will serve as a means to raise awareness of the policies of the European Union toward this important region. The Newsletter will be published six times a year and is designed to highlight significant developments and news concerning the EU’s Central Asia policies. We hope that this initiative, along with the other activities to be held under the EUCAM umbrella, will serve as a useful resource for the wide community interested in this area and we look forward to hearing from our readers with ideas, suggestions and comments about how to enhance the work of the project.