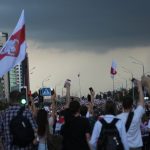 Covid-19 takes a backseat to war, protests, and power struggles

While the world continued to struggle with Covid-19 and had their eyes set on the outcome of the US elections, Eastern Europe and Central Asia were startled by the war over Nagorno-Karabakh, the protests in Minsk and the sudden power change in Bishkek. The protests in Belarus, which began in September, did have some media coverage and caught some attention in Western Europe, but the fraudulent elections in Kyrgyzstan and subsequent power grab by the rather unknown Sadyr Japarov went largely unnoticed to most Europeans. In the meantime, the war between Armenia and Azerbaijan over Nagorno-Karabakh only began to attract substantial attention in Western Europe when a deal was suddenly struck by Russia. If these events were largely missed by the European public and politicians alike, how have Central Asians perceived such intense developments in the former Soviet space?

In this EUCAM Watch, five Central Asian analysts shed some light into how these events were regarded and reported in their respective countries. Whereas it seems that none of these developments got the coverage they deserved in neither Europe nor Central Asia (perhaps with the exception of the Kyrgyz events in Central Asian media), there are some differences and similarities among them.

First, there was a difference in the offer and consumption of media. National media in Central Asia seems to play a secondary role; the elderly tend to follow Russian media where they hear one thing, while the youth is on social media where they discuss another thing. A lot of the debates on Belarus and Kyrgyzstan were fleshed out on social media platforms, while Central Asian governments clumsily tried to steer the traditional national media debate, but without having a clear direction of where they wanted to go: ignore protests in other countries or cover them as something evil? There is a clear difference between Central Asia and Europe; in most European countries, media and social media are free and tend to run more in parallel, but the stories or trending topics are becoming increasingly inward-looking (perhaps with the exception of the US elections).

A second difference lied in the view of Russia’s role. In Central Asia, views and analyses on Russia’s involvement strongly dominated the news regarding the war over Nagorno-Karabakh and the Belarus protests. Who would Russia support? What would be decided in Moscow? Russia is clearly seen as having the power to determine the course and the fate of neighbouring countries. Besides the obvious military and diplomatic power wielded by Russia in Central Asia and Eastern Europe, there is also a lingering strong historical sentiment of a shared Soviet past that is recognisable in language, mentality, and architecture. In Europe, the debate on Belarus did not centre on Russia’s role but more on the street protests themselves and the heavy-handed reaction by President Aleksander Lukashenko’s security forces. Regarding Nagorno-Karabakh, the European focus was on Turkey and Russia. Turkey’s role in actively supporting Azerbaijan in its war effort is seen by Europeans within a broader context characterised by additional grievances between Europe and NATO ally Turkey.

But there are also similarities.

First, religious sentiments that could have played a role in the reporting of the war over Nagorno-Karabakh remained very modest. One would have expected public sentiment in Europe siding with Armenia and Christianity, and in Central Asia supporting Azerbaijan as an Islamic country. But this was not so much the case. Yes, in Central Asia, especially among the broader population, Azerbaijan was seen in a more positive light, especially in claiming back territory in and around Nagorno-Karabakh. But this was mostly without vigour, given that Russia – a Christian ally of Armenia – is still dominant in Eurasia, and several Central Asian countries are members of the same regional Russian-led organisations as Armenia is. In Western Europe, the war only received attention when it was over; following a Russian-brokered deal, several traditional media outlets realised what had happened and started reporting about the Armenian refugees and the many churches that were being abandoned in Nagorno-Karabakh.

Second, for Europe and Central Asia alike, there was a feeling of being mere bystanders and spectators in a geopolitical game played by others in the former Soviet space, foremost Russia and, to a lesser extent, Turkey. The EU has not been very active in supporting Belorussian protesters seeking democratic change, and only some sanctions were applied against the country’s leadership. The EU was also absent in Nagorno-Karabakh and was taken by surprise by the quick unravelling of events in Kyrgyzstan (as probably most external parties). Meanwhile, in Central Asia, Kazakhstan’s role as a mediator and bridge-builder (previously displayed in Ukraine, Syria or Afghanistan) was not sought by the international community. In short, in recent Eurasian events, Central Asia and the EU were largely absent.

Those interested in taking a break from Covid-19-related news and learning about Central Asian’s take on matters of war and peace in Eurasia, please have a look at this issue of EUCAM Watch.