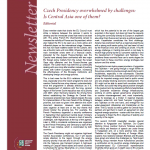 Home All Countries EU Member States Czech Presidency overwhelmed by challenges: Is Central Asia one of them?
EUCAM Watch - No. 2 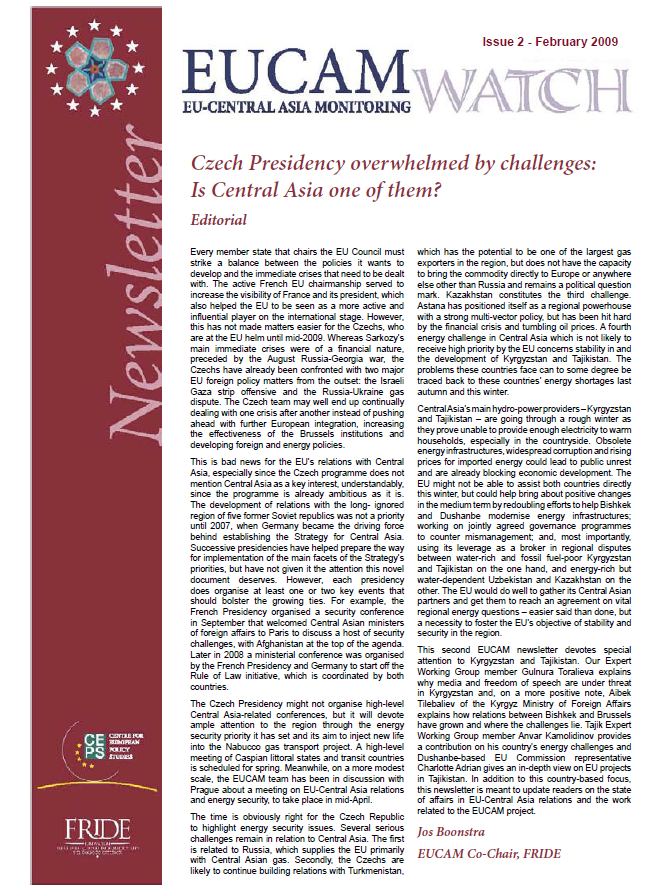 Download “Czech Presidency overwhelmed by challenges: Is Central Asia one of them?” EUCAM-Watch-2.pdf – Downloaded 132 times – 498 KB

Every member state that chairs the EU Council must strike a balance between the policies it wants to develop and the immediate crises that need to be dealt with. The active French EU chairmanship served to increase the visibility of France and its president, which also helped the EU to be seen as a more active and inﬂuential player on the international stage. However, this has not made matters easier for the Czechs, who are at the EU helm until mid-2009. Whereas Sarkozy’s main immediate crises were of a fnancial nature, preceded by the August Russia-Georgia war, the Czechs have already been confronted with two major EU foreign policy matters from the outset: the Israeli Gaza strip offensive and the Russia-Ukraine gas dispute. The Czech team may well end up continually dealing with one crisis after another instead of pushing ahead with further European integration, increasing the effectiveness of the Brussels institutions and developing foreign and energy policies.

This is bad news for the EU’s relations with Central Asia, especially since the Czech programme does not mention Central Asia as a key interest, understandably, since the programme is already ambitious as it is. The development of relations with the long- ignored region of fve former Soviet republics was not a priority until 2007, when Germany became the driving force behind establishing the Strategy for Central Asia. Successive presidencies have helped prepare the way for implementation of the main facets of the Strategy’s priorities, but have not given it the attention this novel document deserves. However, each presidency does organise at least one or two key events that should bolster the growing ties. For example, the French Presidency organised a security conference in September that welcomed Central Asian ministers of foreign affairs to Paris to discuss a host of security challenges, with Afghanistan at the top of the agenda. Later in 2008 a ministerial conference was organised by the French Presidency and Germany to start off the Rule of Law initiative, which is coordinated by both countries.

The Czech Presidency might not organise high-level Central Asia-related conferences, but it will devote ample attention to the region through the energy security priority it has set and its aim to inject new life into the Nabucco gas transport project. A high-level meeting of Caspian littoral states and transit countries is scheduled for spring. Meanwhile, on a more modest scale, the EUCAM team has been in discussion with Prague about a meeting on EU-Central Asia relations and energy security, to take place in mid-April.

The time is obviously right for the Czech Republic to highlight energy security issues. Several serious challenges remain in relation to Central Asia. The frst is related to Russia, which supplies the EU primarily with Central Asian gas. Secondly, the Czechs are likely to continue building relations with Turkmenistan, which has the potential to be one of the largest gas exporters in the region, but does not have the capacity to bring the commodity directly to Europe or anywhere else other than Russia and remains a political question mark. Kazakhstan constitutes the third challenge. Astana has positioned itself as a regional powerhouse with a strong multi-vector policy, but has been hit hard by the fnancial crisis and tumbling oil prices. A fourth energy challenge in Central Asia which is not likely to receive high priority by the EU concerns stability in and the development of Kyrgyzstan and Tajikistan. The problems these countries face can to some degree be traced back to these countries’ energy shortages last autumn and this winter.

Central Asia’s main hydro-power providers – Kyrgyzstan and Tajikistan – are going through a rough winter as they prove unable to provide enough electricity to warm households, especially in the countryside. Obsolete energy infrastructures, widespread corruption and rising prices for imported energy could lead to public unrest and are already blocking economic development. The EU might not be able to assist both countries directly this winter, but could help bring about positive changes in the medium term by redoubling efforts to help Bishkek and Dushanbe modernise energy infrastructures; working on jointly agreed governance programmes to counter mismanagement; and, most importantly, using its leverage as a broker in regional disputes between water-rich and fossil fuel-poor Kyrgyzstan and Tajikistan on the one hand, and energy-rich but water-dependent Uzbekistan and Kazakhstan on the other. The EU would do well to gather its Central Asian partners and get them to reach an agreement on vital regional energy questions – easier said than done, but a necessity to foster the EU’s objective of stability and security in the region.

This second EUCAM newsletter devotes special attention to Kyrgyzstan and Tajikistan. Our Expert Working Group member Gulnura Toralieva explains why media and freedom of speech are under threat in Kyrgyzstan and, on a more positive note, Aibek Tilebaliev of the Kyrgyz Ministry of Foreign Affairs explains how relations between Bishkek and Brussels have grown and where the challenges lie. Tajik Expert Working Group member Anvar Kamolidinov provides a contribution on his country’s energy challenges and Dushanbe-based EU Commission representative Charlotte Adrian gives an in-depth view on EU projects in Tajikistan. In addition to this country-based focus, this newsletter is meant to update readers on the state of affairs in EU-Central Asia relations and the work related to the EUCAM project.