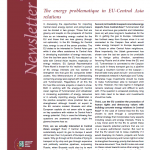 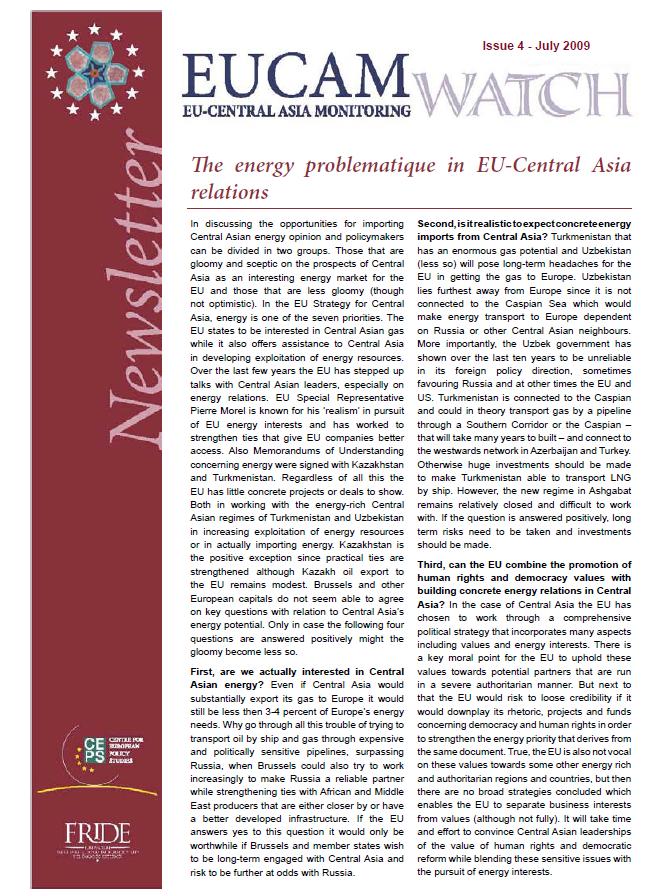 In discussing the opportunities for importing Central Asian energy opinion and policymakers can be divided in two groups. Those that are gloomy and sceptic on the prospects of Central Asia as an interesting energy market for the EU and those that are less gloomy (though not optimistic). In the EU Strategy for Central Asia, energy is one of the seven priorities. The EU states to be interested in Central Asian gas while it also offers assistance to Central Asia in developing exploitation of energy resources. Over the last few years the EU has stepped up talks with Central Asian leaders, especially on energy relations. EU Special Representative Pierre Morel is known for his ‘realism’ in pursuit of EU energy interests and has worked to strengthen ties that give EU companies better access. Also Memorandums of Understanding concerning energy were signed with Kazakhstan and Turkmenistan. Regardless of all this the EU has little concrete projects or deals to show. Both in working with the energy-rich Central Asian regimes of Turkmenistan and Uzbekistan in increasing exploitation of energy resources or in actually importing energy. Kazakhstan is the positive exception since practical ties are strengthened although Kazakh oil export to the EU remains modest. Brussels and other European capitals do not seem able to agree on key questions with relation to Central Asia’s energy potential. Only in case the following four questions are answered positively might the gloomy become less so.

First, are we actually interested in Central Asian energy? Even if Central Asia would substantially export its gas to Europe it would still be less then 3-4 percent of Europe’s energy needs. Why go through all this trouble of trying to transport oil by ship and gas through expensive and politically sensitive pipelines, surpassing Russia, when Brussels could also try to work increasingly to make Russia a reliable partner while strengthening ties with African and Middle East producers that are either closer by or have a better developed infrastructure. If the EU answers yes to this question it would only be worthwhile if Brussels and member states wish to be long-term engaged with Central Asia and risk to be further at odds with Russia.

Second, is it realistic to expect concrete energy imports from Central Asia? Turkmenistan that has an enormous gas potential and Uzbekistan (less so) will pose long-term headaches for the EU in getting the gas to Europe. Uzbekistan lies furthest away from Europe since it is not connected to the Caspian Sea which would make energy transport to Europe dependent on Russia or other Central Asian neighbours. More importantly, the Uzbek government has shown over the last ten years to be unreliable in its foreign policy direction, sometimes favouring Russia and at other times the EU and US. Turkmenistan is connected to the Caspian and could in theory transport gas by a pipeline through a Southern Corridor or the Caspian – that will take many years to built – and connect to the westwards network in Azerbaijan and Turkey. Otherwise huge investments should be made to make Turkmenistan able to transport LNG by ship. However, the new regime in Ashgabat remains relatively closed and diffcult to work with. If the question is answered positively, long term risks need to be taken and investments should be made.

Third, can the EU combine the promotion of human rights and democracy values with building concrete energy relations in Central Asia? In the case of Central Asia the EU has chosen to work through a comprehensive political strategy that incorporates many aspects including values and energy interests. There is a key moral point for the EU to uphold these values towards potential partners that are run in a severe authoritarian manner. But next to that the EU would risk to loose credibility if it would downplay its rhetoric, projects and funds concerning democracy and human rights in order to strengthen the energy priority that derives from the same document. True, the EU is also not vocal on these values towards some other energy rich and authoritarian regions and countries, but then there are no broad strategies concluded which enables the EU to separate business interests from values (although not fully). It will take time and effort to convince Central Asian leaderships of the value of human rights and democratic reform while blending these sensitive issues with the pursuit of energy interests.

Fourth, are these countries stable enough to do business with? With the exception of Kazakhstan the Central Asian states are probably not suffciently stable in the eyes of big longterm investors. So, only if a process of structural economic and governance reform takes place in Kazakhstan and especially Turkmenistan and Uzbekistan will they be able to create the stability they need to engage fully in the global economic arena. Reform of governance does not necessarily mean complete overhaul of governance or regime-change but would imply that these countries create a certain level of EU supported but homegrown good governance credentials; especially in the economic sector that is under scrutiny here and the security sector that needs to uphold national security instead of a more narrow regime security.

Clearly the EU is faced with internal disagreement on how to answer these questions. Thus the Central Asian leaders and populations have become confused from mixed messages and divergent views and actions. The best way forward seems to go beyond the Strategy and further embed the EU’s values in a concrete way with the energy cooperation. The EU will need to convince the Central Asian republics that good governance is not only a good thing in itself but that it will increase effciency and effectiveness in developing the energy sector and trade with a view to create long-lasting stability and prosperity.

This EUCAM Watch devotes special attention to the energy question, including the water-hydroelectric tensions that prevail in Central Asia. Much of the material is based on a high-level roundtable and subsequent seminar that EUCAM organised in Prague last April. Vaclav Hubinger of the Czech Republic Ministry of Foreign Affairs gives an insight to the EU Presidency; the work accomplished and the energy priority it has set. EUCAM expert Michael Denison explains the state-of-affairs of energy relations with Turkmenistan. Also we offer a comment by OSI expert Jacqueline Hale on the revision of EU Assistance documents and an interview with Rainer Behnke, Team leader of the Project: Development of Co-ordinated National Energy Policies in Central Asia within the INOGATE framework. Additionally, this bulletin is meant to update readers on EU-Central Asia relations and the work related to the EUCAM project.