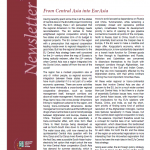 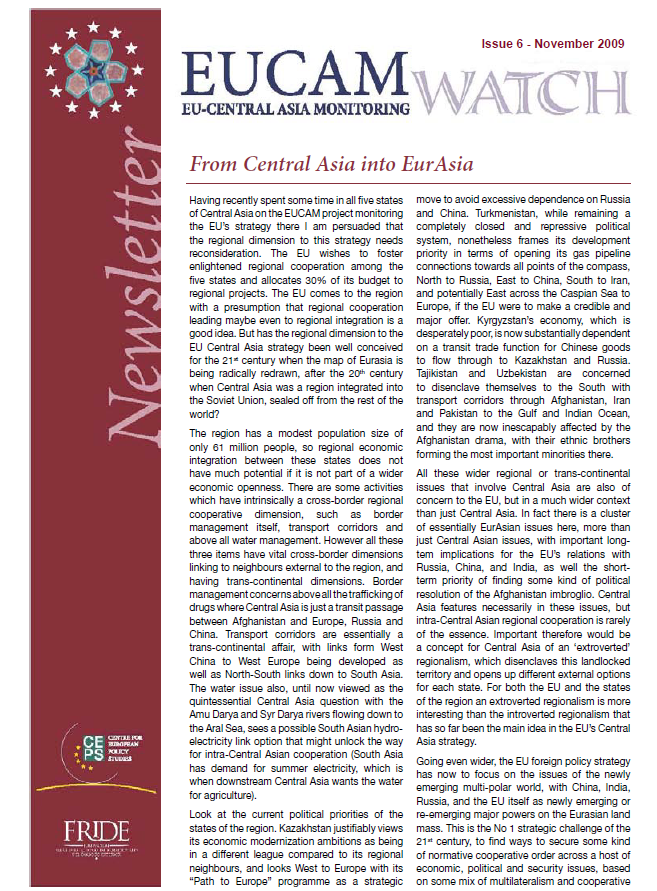 Having recently spent some time in all fve states of Central Asia on the EUCAM project monitoring the EU’s strategy there I am persuaded that the regional dimension to this strategy needs reconsideration. The EU wishes to foster enlightened regional cooperation among the fve states and allocates 30% of its budget to regional projects. The EU comes to the region with a presumption that regional cooperation leading maybe even to regional integration is a good idea. But has the regional dimension to the EU Central Asia strategy been well conceived for the 21st century when the map of Eurasia is being radically redrawn, after the 20th century when Central Asia was a region integrated into the Soviet Union, sealed off from the rest of the world?

The region has a modest population size of only 61 million people, so regional economic integration between these states does not have much potential if it is not part of a wider economic openness. There are some activities which have intrinsically a cross-border regional cooperative dimension, such as border management itself, transport corridors and above all water management. However all these three items have vital cross-border dimensions linking to neighbours external to the region, and having trans-continental dimensions. Border management concerns above all the traffcking of drugs where Central Asia is just a transit passage between Afghanistan and Europe, Russia and China. Transport corridors are essentially a trans-continental affair, with links form West China to West Europe being developed as well as North-South links down to South Asia. The water issue also, until now viewed as the quintessential Central Asia question with the Amu Darya and Syr Darya rivers ﬂowing down to the Aral Sea, sees a possible South Asian hydroelectricity link option that might unlock the way for intra-Central Asian cooperation (South Asia has demand for summer electricity, which is when downstream Central Asia wants the water for agriculture).

Look at the current political priorities of the states of the region. Kazakhstan justifably views its economic modernization ambitions as being in a different league compared to its regional neighbours, and looks West to Europe with its “Path to Europe” programme as a strategic move to avoid excessive dependence on Russia and China. Turkmenistan, while remaining a completely closed and repressive political system, nonetheless frames its development priority in terms of opening its gas pipeline connections towards all points of the compass, North to Russia, East to China, South to Iran, and potentially East across the Caspian Sea to Europe, if the EU were to make a credible and major offer. Kyrgyzstan’s economy, which is desperately poor, is now substantially dependent on a transit trade function for Chinese goods to ﬂow through to Kazakhstan and Russia. Tajikistan and Uzbekistan are concerned to disenclave themselves to the South with transport corridors through Afghanistan, Iran and Pakistan to the Gulf and Indian Ocean, and they are now inescapably affected by the Afghanistan drama, with their ethnic brothers forming the most important minorities there.

All these wider regional or trans-continental issues that involve Central Asia are also of concern to the EU, but in a much wider context than just Central Asia. In fact there is a cluster of essentially EurAsian issues here, more than just Central Asian issues, with important longtem implications for the EU’s relations with Russia, China, and India, as well the shortterm priority of fnding some kind of political resolution of the Afghanistan imbroglio. Central Asia features necessarily in these issues, but intra-Central Asian regional cooperation is rarely of the essence. Important therefore would be a concept for Central Asia of an ‘extroverted’ regionalism, which disenclaves this landlocked territory and opens up different external options for each state. For both the EU and the states of the region an extroverted regionalism is more interesting than the introverted regionalism that has so far been the main idea in the EU’s Central Asia strategy.

Going even wider, the EU foreign policy strategy has now to focus on the issues of the newly emerging multi-polar world, with China, India, Russia, and the EU itself as newly emerging or re-emerging major powers on the Eurasian land mass. This is the No 1 strategic challenge of the 21st century, to fnd ways to secure some kind of normative cooperative order across a host of economic, political and security issues, based on some mix of multilateralism and cooperative arrangements between the major players. However we can come back again to Central Asia, which is unique as a landlocked region sitting precisely in the middle between the big four of EurAsia – Russia to its North, China to the East, India to the South and the EU to the West. Central Asia is going to be involved in many of these issues, and centrally in the geographic sense, but obviously not with regard to the main weight of the issues.

The conclusion that seems due is that the EU should make an addition to its conception of the multiple regional dimensions of its foreign policy, which already has the Eastern Partnership, Northern Dimension, Union for the Mediterranean, Black Sea Synergy and now the Central Asia strategy. Each of these initiatives has its rationale, although some may fail to get real momentum. But what is missing now is an overarching EurAsian dimension, looking for the ways to devise major cooperative ventures for the multi-polar world, and in particular for the Eurasian landmass. This would be, inter alia, a constructive move towards Russia after the awkward period in which the launch of the Eastern Partnership has been seen as deepening the segmentation of the post-Soviet space in EU policies. But back to Central Asia: the introverted regionalism of the Central Asian strategy might be allocated a more modest role, with the major issues fnding their place in an extroverted regionalism that could be framed within a EurAsian strategy.