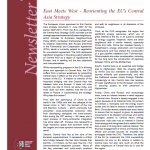 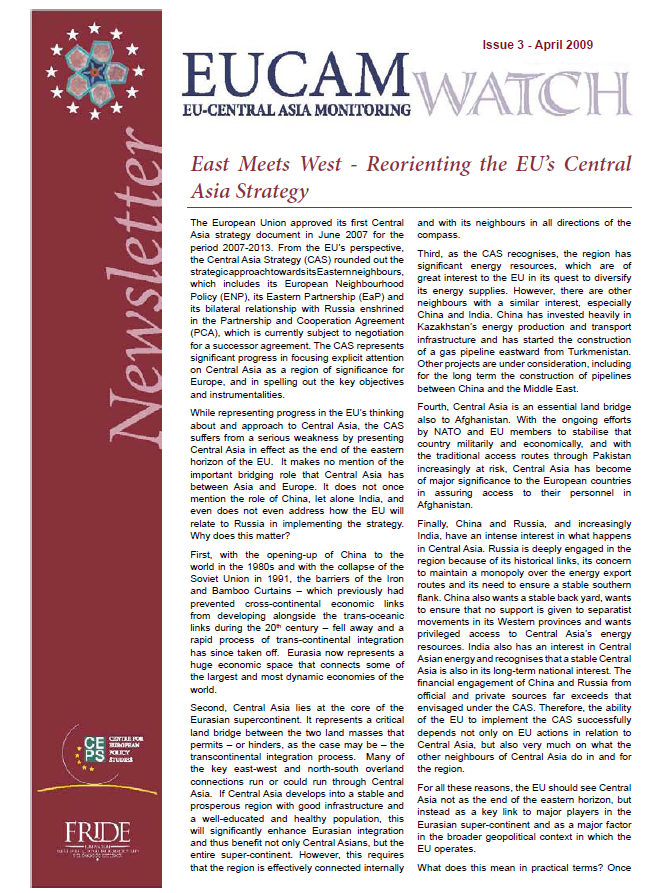 The European Union approved its frst Central Asia strategy document in June 2007 for the period 2007-2013. From the EU’s perspective, the Central Asia Strategy (CAS) rounded out the strategic approach towards its Eastern neighbours, which includes its European Neighbourhood Policy (ENP), its Eastern Partnership (EaP) and its bilateral relationship with Russia enshrined in the Partnership and Cooperation Agreement (PCA), which is currently subject to negotiation for a successor agreement. The CAS represents signifcant progress in focusing explicit attention on Central Asia as a region of signifcance for Europe, and in spelling out the key objectives and instrumentalities.

While representing progress in the EU’s thinking about and approach to Central Asia, the CAS suffers from a serious weakness by presenting Central Asia in effect as the end of the eastern horizon of the EU. It makes no mention of the important bridging role that Central Asia has between Asia and Europe. It does not once mention the role of China, let alone India, and even does not even address how the EU will relate to Russia in implementing the strategy. Why does this matter?

First, with the opening-up of China to the world in the 1980s and with the collapse of the Soviet Union in 1991, the barriers of the Iron and Bamboo Curtains – which previously had prevented cross-continental economic links from developing alongside the trans-oceanic links during the 20</span>th </span>century – fell away and a rapid process of trans-continental integration has since taken off. Eurasia now represents a huge economic space that connects some of the largest and most dynamic economies of the world.

Second, Central Asia lies at the core of the Eurasian supercontinent. It represents a critical land bridge between the two land masses that permits – or hinders, as the case may be – the transcontinental integration process. Many of the key east-west and north-south overland connections run or could run through Central Asia. If Central Asia develops into a stable and prosperous region with good infrastructure and a well-educated and healthy population, this will signifcantly enhance Eurasian integration and thus beneft not only Central Asians, but the entire super-continent. However, this requires that the region is effectively connected internally and with its neighbours in all directions of the compass.

Third, as the CAS recognises, the region has signifcant energy resources, which are of great interest to the EU in its quest to diversify its energy supplies. However, there are other neighbours with a similar interest, especially China and India. China has invested heavily in Kazakhstan’s energy production and transport infrastructure and has started the construction of a gas pipeline eastward from Turkmenistan. Other projects are under consideration, including for the long term the construction of pipelines between China and the Middle East.

Fourth, Central Asia is an essential land bridge also to Afghanistan. With the ongoing efforts by NATO and EU members to stabilise that country militarily and economically, and with the traditional access routes through Pakistan increasingly at risk, Central Asia has become of major signifcance to the European countries in assuring access to their personnel in Afghanistan.

Finally, China and Russia, and increasingly India, have an intense interest in what happens in Central Asia. Russia is deeply engaged in the region because of its historical links, its concern to maintain a monopoly over the energy export routes and its need to ensure a stable southern ﬂank. China also wants a stable back yard, wants to ensure that no support is given to separatist movements in its Western provinces and wants privileged access to Central Asia’s energy resources. India also has an interest in Central Asian energy and recognises that a stable Central Asia is also in its long-term national interest. The fnancial engagement of China and Russia from offcial and private sources far exceeds that envisaged under the CAS. Therefore, the ability of the EU to implement the CAS successfully depends not only on EU actions in relation to Central Asia, but also very much on what the other neighbours of Central Asia do in and for the region.

For all these reasons, the EU should see Central Asia not as the end of the eastern horizon, but instead as a key link to major players in the Eurasian super-continent and as a major factor in the broader geopolitical context in which the EU operates.

What does this mean in practical terms? Once the perspective is shifted, the implications for the CAS are clear:

First, the EU should give greater attention than it has so far to the extension of the Trans-European transport network (TEN) to and through Central Asia. This means more investments in transport infrastructure in the Eastern Partnership countries as well as in Central Asia proper. It also means much more attention to agreements with these countries on transit facilitation measures, including improvements in border crossings, which reduce the cost and time of transcontinental travel.

Second, the EU needs to explicitly factor into its energy plans the fact that it will be competing with China and India for the signifcant, but limited energy supplies of the Caspian basin. While projects like the Nabucco gas pipeline are an important potential source of EU energy supply, their potential will be severely constrained if, as is already evident, Asian countries successfully compete for access to Central Asian energy.

Third, the EU should consult with Russia and China on their approaches to the economic and political development of the region and where possible harmonise and coordinate its engagement in Central Asian countries with these key players. Given the EU’s limited fnancial engagement envisaged in the region, the EU as far as possible needs to leverage its resources by coordinating rather than competing with the assistance of the other neighbours, whether in infrastructure, education, health or other felds.

Fourth, where there are risks of regional instability and possible conﬂict, as currently in connection with an intensifying competition between upstream and downstream countries over Central Asia’s water resources, the EU should consult with China, Russia and the US to seek common approaches in limiting the risks of conﬂict and where possible fnd long-term solutions to the tensions.

Fifth, the EU should intensify its contacts with regional organisations involving Central Asia. The most important of these organisations are the Shanghai Cooperation Organisation (SCO), which includes China and Russia; the Eurasian Economic Community (EAEC), which is led by Russia; and the Central Asian Economic Cooperation Programme (CAREC), which involves China and is supported by the Asian Development Bank and other multilateral institutions. Such contacts are envisaged in the CAS, and some efforts are underway in this regard. However, much more could be done to explore linkages in key areas of the CAS, such as trade, transport and transit, water and energy, and in combating common threats of drugs, terrorism and conﬂict.

Finally, the time has come for the EU to explore the possibility of a summit of the four main Eurasian economies – China, the EU, India and China – whose cooperation will be essential for an effective integration of the continental economic space of Eurasia. A principal focus of discussion at a frst such summit could and should be how these four powers can cooperate to help ensure the effective economic integration of Central Asia as part of the broader Eurasian economic integration process.