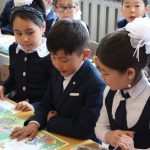 Central Asia’s educational systems have been deteriorating for almost three decades. Education is a key EU-driven area of EU-Central Asia cooperation. However, the EU’s focus on promoting large-scale systemic reform has not been attuned to local circumstances, and governments have been unwilling to pursue EU-driven educational reform. The new EU strategy for Central Asia provides an opportunity to develop concrete education programmes that are tailored to each country’s needs and can have a sustainable impact.

Central Asia’s educational systems have been deteriorating since the collapse of the Soviet Union. All five Central Asian republics, to varying degrees, lack high-quality, effective education. Bad governance and pervasive corruption have added to the increasing disconnect between students’ training and employers’ needs. This is hindering the region’s human development and long-term economic stability.

Education is a key area of cooperation between the European Union (EU) and Central Asia. Tertiary education has been the main focus of EU support to promote large-scale systemic reform to make Central Asian higher education systems compatible with the Bologna Process (aimed at inter-governmental cooperation on higher education in Europe in the broadest sense). However, most EU-proposed reforms have not been implemented by local governments. First, European political and financial attention has been insufficient as the region is not a high priority for the EU. Second, Central Asian governments have been disinclined to implement reforms that they see as a threat to their authority. And third, several local actors have often shown an unwillingness to accept concepts that they perceive as alien to their social and economic realities.

The new EU strategy for Central Asia highlights education, and the forthcoming new Neighbourhood, Development and International Cooperation Instrument (from 2021 onwards) could offer the flexibility to support different aspects of education. The EU’s proposal of creating a Central Asian regional higher education area, based on the European Higher Education Area (launched in 2010 as an outcome of the Bologna Process), might work better than the previous one-size-fits-all approach that has undermined the impact of EU education assistance to Central Asia. However, there is still a risk that the approach’s relevance and effectiveness come under scrutiny, as it follows the much-criticized Bologna principle.

Rather than focusing on broad reform, the EU should consider several smaller targeted national projects that are more adapted to the local context and consistent with the amount of funding it is able to commit in the long term. This would enable the EU to engage with Central Asia on a practical level over the full spectrum of education and training.